First Kiss: On Watching Luca Guadagnino’s ‘Call Me By Your Name’

First Kiss: On Watching Luca Guadagnino’s ‘Call Me By Your Name’ 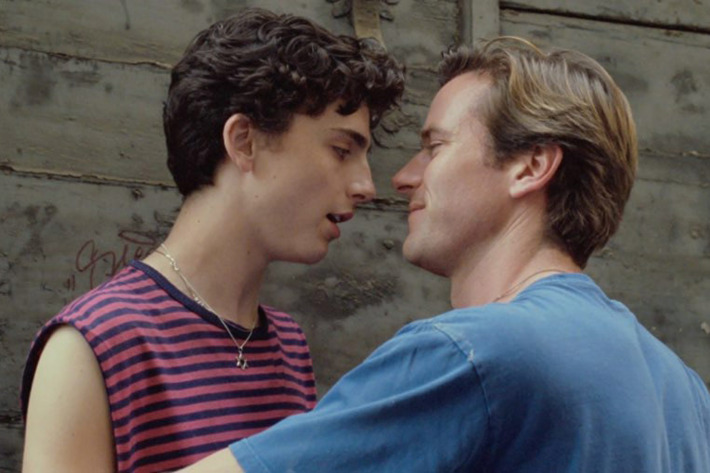 In Luca Guadagnino’s Call Me By Your Name, 24-year old Oliver asks his precocious soon-to-be lover, “Is there anything you don’t know?” to which 17-year-old Elio answers, “If you only knew how little I know about the things that matter.”

I felt like that once. I, too, began the process of coming out when I was seventeen, and my closest friends and I spent much of that summer in a dimly-lit basement, listening to music under a cloud of pot smoke. They were the most important people in my life at that time. We explored condemned buildings together. We sat around bonfires in farmers’ fields, aspiring to great things together—environmental activists, writers, filmmakers. We once hit a patch of black ice together, sliding off the county road and slamming sideways into a ditch of snow, almost dying together, but I felt safe with them. These were the first people I came out to, and that basement became a safe haven from those who didn’t know or didn’t want to.

Jesse was also seventeen, though he looked about twelve and had the voice of a man who drank bourbon at breakfast. He also swore—a lot, which was disarming for people who might have otherwise described him as baby-faced, almost saintly-looking. For Jesse, puberty had begun in the mouth.

It was in this basement that Jesse and I ended up sprawled out next to each other on the floor, and it was on this floor—which was uncarpeted, and concrete, and held cold like a stainless steel fridge—that he and I shared a blanket together, listening to Rufus Wainwright warble in French about his master, Rebel Prince. And it was under this woven blanket, and to a refrain of Marigold, Marigold, Marigold, that I was kissed for the first time.

I had never been close enough to another boy to breathe in his cleanliness. I took in his soap, his shampoo, his deodorant. I could taste the marijuana on his tongue. I could taste him, that unique recipe of one’s saliva and sweat, and my heart was drumming so fast, he could probably feel it through my clothes.

I’ve experienced many kisses since then. They’ve been tender. Passionate. Placeholders for conversation. Placeholders for love. They’ve been love, but only once, and lust, many times. They’ve been weird. Invasive, almost clinical. They’ve been prickly. But, at seventeen, that first kiss was smooth in a way that only a boy can be smooth, and it scared me in a way that only a boy can be scared. What I know now is that, your first time, you’re more anxious than you’ll ever be again. That first kiss was new, and exciting, and destabilizing. I had never felt like that before, and I didn’t realize, as most firsts go, that one is unlikely to feel that again.

I’m now twice the age of the boy in that basement, and I’ve generally assumed my firsts are behind me, until last month when I attended my first film screening at the Toronto International Film Festival. Based on the novel of the same name by André Aciman, Call Me By Your Name spans six-weeks in the life of Elio, a teenage boy who falls in love with his father’s research assistant.

Over the course of the film, the viewer accompanies Elio on his path of self-discovery, bearing witness to every first: being held by a man, kissed by a man, making love to a man and being loved by a man. And since that screening last September, I’ve not been able to forget this film, in the same way I’m unable to forget that first kiss in a friend’s basement, and the connection between these two events is enough to make me cry with gratitude.

What Luca Guadagnino gives us with Call Me By Your Name is the gift of time-travel. To watch this film is to relive the kind of summer that can only belong to an adolescent, full of novelty, and anticipation, and uncertainty—of where you’ll be led, and how you’ll be changed, and who you will be when you reach the end of it.

Many of us, I think, entered that theatre on the opposite side of these questions. Some of our journeys have reached the point of no return. Some of us are closer to the end than the beginning, looking backward instead of forward. Some of us know too much, or regret too much. Some of us pass a mirror and avoid our reflection, not because of the life looking back at us, but the one that does not.

But after watching that film, my friends and I stepped out onto the street overwhelmed by memory—his shampoo, his tongue, my heartbeat. First kiss, first love, the briefness of it, the brightness. We walked out of the Ryerson Theatre having briefly held our innocence in the palms of our hands.

No one tells you how unceremoniously adolescence ends. You can’t hang on to inexperience, any more than you can shed the weight of what you know. But Luca Guadagnino’s Call Me By Your Name is a coming-of-age story that transports you, however briefly, to another time and another you. Like its source material, it is a film that makes it possible to be kissed for the first time a second time—there is no greater alchemy than that.

GunnShots: Winter 2011
The Banal and the Profane: Shawn Syms
Playwright Kyoung H. Park on Peace, Theater and the Artist's Duty