‘Dragon at the Edge of a Flat World: Portraits and Revelations’ by Joseph Keckler

‘Dragon at the Edge of a Flat World: Portraits and Revelations’ by Joseph Keckler 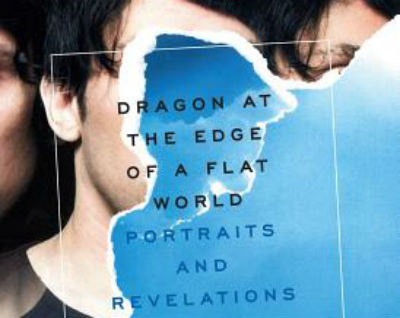 “I am strange,” performer and writer Joseph Keckler reports uttering to his teenage self in the shower, in his newly released essay collection Dragon at the Edge of a Flat World: Portraits and Revelations.

This naked epiphany comes halfway through the book as Keckler contemplates the machinations of love, being mocked at school, and his emerging sense of self as an artist. With his thoughts and the water still running, the future before him and unknown, young Keckler doubles down on difference before toweling off, vowing to himself: “I will become stranger.”

This passage will surely strike a chord of fancy with Keckler’s fans from the Downtown New York performance scene—where he has made a name for himself as a talented and beguiling presence—and at the same time, it also lends itself to be read as a thesis statement for the book. His debut is chock full or anecdotes, riffs, stories, and character sketches filtered through a point of view, created to look for the absurd, odd, singular, and neglected—that is to say, the strange. A lifetime of cultivating an outsider-looking-in status has given Keckler a lot to work with.

As the subtitle suggests, the book runs the gamut from traditional essay and stories to intimate studies of people within his orbit. It is with the latter where his power of observation and skill as a storyteller shine. In the start of the essay “Cat Lady” we are in the Keckler family kitchen, outside of Kalamazoo, where we meet Kit, Keckler’s mother. She is a multidisciplinary artist who no longer makes work since the family house burned down in the 1980s. Since then she has focused on the care of her many cats, something Keckler admires. He writes:

As Warhol dissolved the aura of celebrity through his serial representation of famous faces, as the Marquis de Sade used his characters’ representation of criminal and perverse acts to purse the acts of their meaning, so many mother, though repetition, flushed all the logic out of the fact that a cat can’t do math.

Out of context, this passage may read as patronizing. It is not. He sees his mother as a woman of her own accomplishments, amid other influential greats.

In “The Gerry Party,” Keckler focuses again on an older and influential woman in his life, administrator and perennial muse, Gerry Visco, his one-time boss. Through Keckler’s eyes, Gerry is bold and wondrous, a woman of a certain age, both in demand yet feeling ignored, who jumps from opportunity to opportunity, working to secure some spotlight she rightfully deserves as a pioneering outsider. This essay, which covers the unfinished arc of a life, celebrates Gerry without falling into sycophant territory. “Gerry is a bully of fun,” writes Keckler. ”Like Auntie Mame, she recommends Live, Live, Live! but the tone of her delivery is more akin to the bellicose style of the Misfits as they chant Die! Die! Die!” Keckler is cheering Gerry on from the sidelines, yet in the spirit of Gerry herself, he is ready to leave the party if something better comes up. An eye trained on strangeness, after all, is a roving reporter.

In this way, the format of the book is useful. Keckler is able to move from idea to idea at the pace of his imagination. Beyond that, the form of the book is also meaningful. Dragon echoes a once mighty genre: the essay collection, a ubiquitous 1990s bookstore staple, dominated largely by wryly humorous white gay male writers like David Sedaris, Bob Smith and, one could argue, Wayne Koestenbaum, as well others like Sandra Bernhard,and later Miranda July. Some of these writers’ books sold well, but more importantly, they had cultural impact. Before the internet changed the flow of information, and before the memoir boom of the aughts, essay collections were the genre of choice for the LGBTQ community to share their lives. These books, in their accessible form, offered readers a glimpse into a world that either mirrored their own or was so different they helped a reader imagine what was possible.

These collections did not just come from single authors, nor where they always humorous. Books like Joseph Beam’s Brother to Brother: New Writings by Black Gay Men (1991), and later Mattilda Bernstein Sycamore’s books That’s Revolting (2004) and Why are Faggots so Afraid of Faggots (2012) were lifesaving buoys for people who felt alone in their specificity. The form of discrete yet connected texts spoke to the fragmented yet assimilating reality for many queers. But even earlier than that, Sedaris, Kostenbaum, Bernard, along with Sarah Schulman and her essential essay collection My American History: Lesbian and Gay Life During the Reagan/ Bush Years (1994), came out to a world barreling toward the 21st century amid war, the ongoing AIDS crisis, communication technological advances, and the acceleration of dehumanizing economic forces.

Dragon is most like the earlier essay collections when it comes to Keckler’s funny, clever and queer observations of everyday life. There is a passage in his essay “Andragon” in which he teases out the way men in his home state of Michigan speak: “Most barely utter a word. They just tap their feet and release a few ers, wells, and buts though their teeth like stifled after-dinner burbs. You know the type of guys I mean–all discourse markers and no discourse.” This is Keckler making hay out of the banal, and illustrating the distance he felt from people growing up. It is a queer insight that comes from being strange. To finish the thought he notes how the men he grew up with don’t use vowels, unlike him: “I let my open sounds hang in the air. I like vowels. They travel.” For a reader attuned to queerness—and rhythm—the unfinishedness of that last line is obvious: it ends with a comma and the words “like me.”

As much as Dragon is about the idiosyncratic life of Keckler, it is also about leaving home, and making a life in New York City. This is similar to the 1990s essay collections. Barrel Fever (1994), and Openly Bob (1997) were de facto New York City guide books for queer kids on the great plains of North America thinking about skyscrapers and sex. When Keckler takes a reader through a day that begins with a shift selling audio guides at the Guggenheim and ends with turning down a bear’s sexual advances at a diplomat’s apartment on the Upper East Side, he is map-making, leaving markers of places and possibilities.

This role of guide also comes out when Keckler writes about sexual identity. Like July (and to my untrained early eye, early Sedaris), Keckler’s sexuality is ever present on the page, yet not easily defined. He does not identify as gay, straight, bisexual or otherwise that I found in the course of the book. Rather, he provides pronouns, and descriptions of the people he flirts with, dates and has sex with: a mix of bodies, a glow of pleasure. This fluid understanding of sexuality is a welcome addition to LGBTQ bookshelves.

One of last good funny essay collection was Sloan Crosley’s brilliantly titled, I Was Told There’d Be Cake (2008). Currently, the genre is being ruined by comedians hoping to cement or restart their careers, a trend I blame on Ellen DeGeneres and her first book: My Point…And I Do Have One (1995). Since then it has become a rite of passage. Mindy Kaling, David Cross, Amy Poehler, and Amy Schumer have all published one-punch line books, which would have been better as Kindle Singles. (The one exception being Tina Fey’s 2011 Bossypants , which stands up way better than repeat viewings of 30 Rock). Now we have Dragon at the Edge of a Flat World, a strange and wonderful addition to the canon.

'A History of the Unmarried' by Stephen S. Mills
‘Bettyville’ by George Hodgman
José Esteban Muñoz's Work is a Love Letter to Brownness