‘Something in the Blood: The Untold Story of Bram Stoker, the Man Who Wrote Dracula’ by David J. Skal

‘Something in the Blood: The Untold Story of Bram Stoker, the Man Who Wrote Dracula’ by David J. Skal 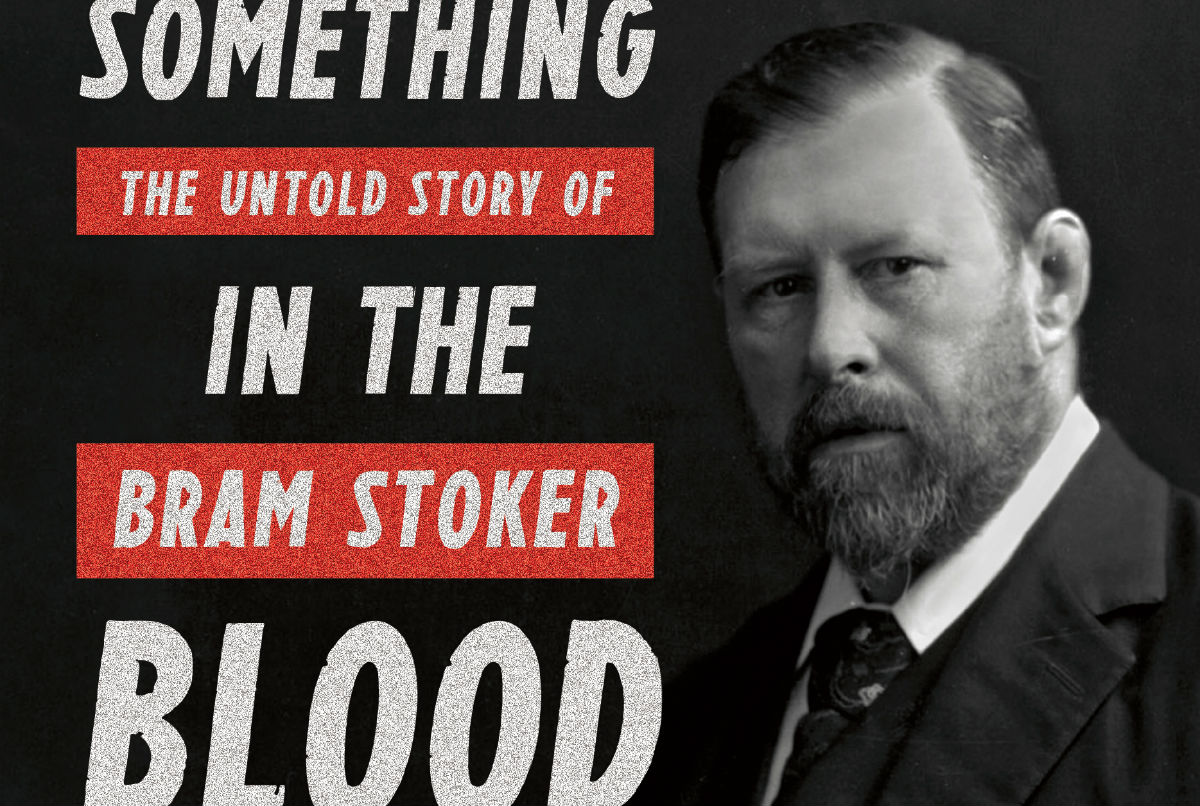 Bram Stoker was gay. Stoker’s understandable circumspection following the trial of Oscar Wilde may have robbed us of any abundance of evidence, but David J. Skal’s painstaking detective work has unearthed a treasure-trove of insight and information about the man who made Dracula.

The specter of Wilde haunts this book, in no small part because Stoker was first a member of the Wilde’s literary coterie, Stoker’s wife was seriously courted by Wilde for marriage, and both families decamped Dublin for London at about the same time. Wilde frequented the Lyceum, the theater Stoker slavishly managed on behalf of his lifelong employer, the actor Henry Irving–a domineering figure whose Faust most certainly informed Dracula. But before dishing out all the literary gossip a reader could desire (which Skal ladles throughout), the biographer wisely delves into both Bram Stoker’s childhood and the literary traditions of Ireland. Even the more widely read readers will find themselves pausing to jot down a title for future review–Something in the Blood is that rich in terms of outlining a dark yet glistening web of influence: from fairy tales and holiday pantomimes, to the plays Stoker helped Irving produce, like the obvious aforementioned Faust to the less clearly so Macbeth (where, under the right candelabra, the witches shimmer into the brides of Dracula). And of course Ireland being a land of dark castles and ancient lore and struggle, he paints a portrait in moonlight, in the same shades as Whistler’s nocturnes.

The lacunas within Stoker’s letters and diaries are maddeningly wide. Skal traces this to any family of the era’s desire to shape future reputation by destroying supposedly unseemly evidence (and his wife outlived him by a quarter of a century), as well as the adult Stoker’s own reluctance to expose what was considered criminal vice at the time. He was a man laboring beneath twin shadows. One of greatness: the exacting Irving was one of the most renowned actors of his day. The other, the pall of scandal: Oscar Wilde skirted the edge one too many times and was very publically impugned, imprisoned, and reviled in the press. Still, there is evidence in Stoker’s lifelong friendship with Hall Caine, one of the 19th Century’s most famous British authors. What Skal reveals was either a love affair or the relationship of two men who shared more than a predilection (his dedication to Stoker in one of his books is practically Grecian in its overt definition of friendship). As writers, both aided the other with their craft and wrote each other letters until Stoker’s death. All the proof anyone needs, however, can be found in his gushing letters to Walt Whitman, the first of which is re-printed in full for the first time within Something in the Blood:

I would like to call YOU Comrade and to talk to you as men who are not poets do not often talk. I think that at first a man would be ashamed, for a man cannot in a moment break the habit of comparative reticence that has become second nature to him; but I know I would not long be ashamed to be natural before you. You are a true man, and I would like to be one myself, and so I would be towards you as a brother and as a pupil to his master. In this age no man becomes worthy of the name without effort. You have shaken off the shackles and your wings are free. I have the shackles on my shoulders still-but I have not wings.

The young Bram didn’t post that letter until much later, along with another daring, nearly-as-effusive declaration. And the two did meet, in America, while Stoker was on tour with Irving. For all his natural radiance and radicalism, only Whitman himself never did out-and-out declare his homosexuality. When Stoker finally did grow his own wings, they were black, leathery, and long incubated.

Like Oscar Wilde, Bram Stoker died of syphilis. The reveal in the book was shocking. I had never before imagined that the specter of STDS stalking us traveled a worn path, that some of our fears were older than I had cared to consider. But then again, such consideration doesn’t come easy when the slate of history is repeatedly wiped clean by embarrassed families, personal fear and public ignorance. Skal rightly sets the record straight with clarity and certainty. The psychological undercurrents of disease, of taint and dread, of blood, all engorge the figure of Dracula and are thoroughly explored within this biography. As Jack the Ripper stalked the prostitutes of Whitechapel, gay Victorians were hunted by more than the fear of discovery and rejection, the terror, the diagnosis of which generated an internal pressure within Stoker to produce a dark art of longing and menace, of escape and capture, of immortality and death.

The stature of the novel, Dracula, grew steadily after publication, but the book was produced relatively late-in-life. (Dracula came out when Stoker was fifty. Wilde published The Picture of Dorian Gray at thirty-six.) Though Skal documents Stoker’s other attempts at literary success (and uncovers an abandoned homoerotic literary sketch), only his last novel, the luridly phallic Grand Guignol that is The Lair of the White Worm, comes close (and not that close) to measuring up to Dracula. However, this tale was likely saved from obscurity by Ken Russell’s memorably psychedelic film.

Oscar’s fame only increased post-mortem. That’s when Stoker’s started. Or rather Dracula’s. No monster has so laid claim the silver screen, and thus a huge share of the world’s imagination, as much the Count. This is where Skal comes in. He’s certainly the right guy for this job, having cut his teeth on books like Hollywood Gothic: The Tangled Web of Dracula from Novel to Stage to Screen and The Monster Show: A Cultural History of Horror among others (including a collaboration on a biography of Dracula filmmaker Todd Browning that’s now on my must-read list). You can find Skal in several documentaries that accompany the Universal Studios classic monster DVD and Blu Ray releases. And it proves just how long Dracula’s cape stretches, that Something in the Blood is published by Liveright, an imprint of W.W. Norton & Company. Horace Liveright, founder of the original publishing company, first brought Dracula to the stage in the U.S., thereby introducing audiences to Bela Lugosi. Cinematic history followed.

Researching and compiling this biography was a tremendous undertaking, one where the pay-off is in spades. Something in the Blood is a ripping good read; wonderfully illustrated, a loaded compendium of Wildeana, and of utmost importance, the world now knows that Bram Stoker was gay. At the turn of a century two gay men created new myths and in the alchemical process of writing became immortal themselves. One was imprisoned for his flippant honestly, the other survived by subterfuge common to that era (and sadly this one). In doing so, his creation emerged larger than life. Literally. Wilde was always bigger than Dorian Gray. Dracula looms over all of them. With David Skal’s carefully researched and inviting tome, Stoker is finally drawn out from behind the shadow of his monster to enjoy his own Whitman-esque revelation, one of “nature without check.”

Wilde’s ghostly imprint still lingers in the pages of Dracula. Jonathan Harker’s visceral disgust at the count’s swollen, blood-bloated body (“he lay like a filthy leech”) echoes countless descriptions of Wilde, and Harker’s fear that Dracula will spread “an ever-widening circle of semi-demons” finds parallel in the sentencing judge’s characterization of Wilde as “the center of a hideous circle of corruption.” During the trial, a Savoy Hotel chambermaid had testified to the excrement-streaked sheets removed from Oscar’s rooms while he and Bosie were in residence; just as the vampire rested on a bed of his native earth, Wilde, too, seemed to sleep in proprietary dirt. Both Dracula and Wilde maintained multiple residences around London to avoid detection of their activities. Both had made a sea voyage from their land of origin, relocating to London–only to be destroyed.

Memorial Raises Thought-Provoking Questions about Race, Class, and Family
'What Becomes of the Brokenhearted: A Memoir' by E. Lynn Harris
'Beyond Magenta: Transgender Teens Speak Out' by Susan Kuklin