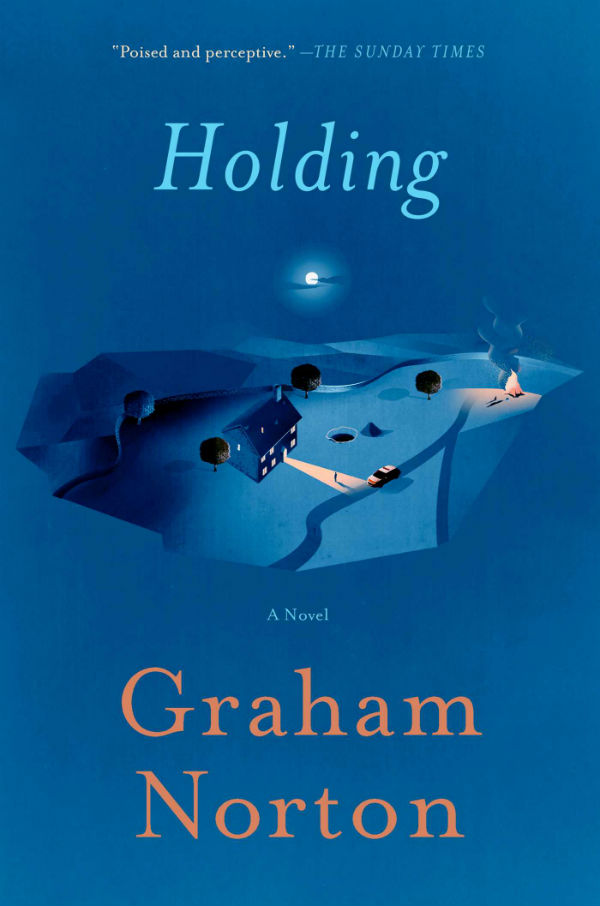 Enjoying success as a popular talk show host and memoirist in the UK, Grahan Norton has managed to penetrate the consciousness of American popular culture. He appeared, as himself, in the 2016 film adaptation of the beloved television show Absolutely Fabulous. He also took a seat as guest judge on RuPaul’s All Stars Drag Race. And now he has written a novel, Holding. Sure, countless celebrities dream about penning novels. The judgmental snob in us all may quickly dismiss this work. A comic showman writing literary fiction? What is most notable about Holding is, after only a few pages, readers forget that Graham Norton is, in fact, the author.

Holding unfurls in the dinky Irish town of Duneen. Among a pack of locals, Sergeant PJ Collins is our unorthodox hero. Norton writes, “PJ just got bigger and bigger…he could see that he had hidden behind his size and used it as an excuse so he didn’t have to compete in all the trials of adolescence. Being overweight hadn’t made him happy necessarily, but it helped him avoid a great deal of heartache. It got him off the hook.” PJ’s career in law enforcement normally consists of speeding violations and herding drunks after last call. One crisp morning, however, he receives alert that human bones have been discovered at a nearby construction site. Duneen instantly whirls with gossip. Mothers trade theories at O’Driscolls market. Charity coffee hours brim with possible suspects and motives. Even sweet old Mrs. Meany is captivated. At the center of everything, PJ quickly becomes a celebrity himself. Even though he’s flooded with questions, PJ seems to be the fellow with the fewest answers. “There are no happy endings in life […]” PJ laments, “so why go bother looking for one?”

Bodily remains can only mean one thing: murder. PJ and Detective Dunne (a real prick, according to PJ) deduce that the bones must belong to the once beloved town heartthrob, Tommy Burke. Tommy has been missing for nearly twenty-five years and has left behind quite a mess. Brid Riordan, the neighborhood drunk, was once engaged to Tommy. Was his marital pledge for Brid’s real estate or Brid’s love? Evelyn Ross, the orphaned town beauty, claims she and Tommy had a deep, fairytale-like love only few were privy to. Was Tommy planning to leave Brid or was this entire affair a result of Evelyn’s young imagination?

The characters in Holding each clutch their own piece of a very large and very revered secret. As with any novel driven by mystery, the reader must complete the sleuthing on his or her own.

Holding is a generous surprise. At the helm, Norton’s prose is crafty, inspired and sublimely comic. His characters, though, are his true victory. Our hero could easily be some sappy lug, but PJ is strong, warm and full of admirable shortcomings. The townspeople could simply be idle clichés, but truly, they are pumped with color, completely developed. Norton’s players are wardens of uneasy truths, but also, they hold some scrap of hope.

With all judgments of the author’s multi-tiered biography aside, this book is a reminder that behind Graham Norton’s wit, there’s a whole lot of heart.