‘Her Body and Other Parties’ by Carmen Maria Machado

‘Her Body and Other Parties’ by Carmen Maria Machado 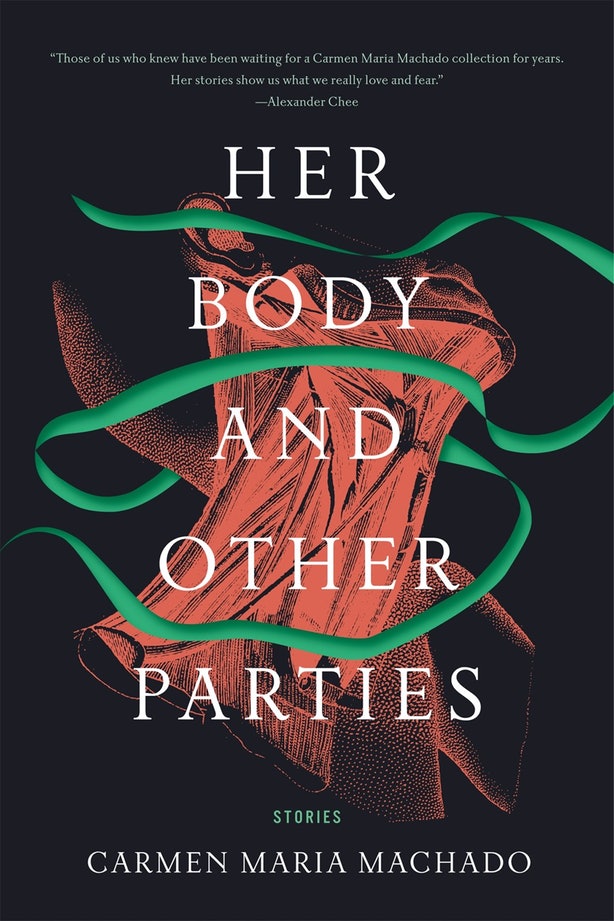 A mysterious green ribbon around a woman’s neck. An inventory of lovers, written as the world falls apart. A phantasmagoric reimagining of one of television’s most popular shows. These are only a few of the wonders contained in the pages of Her Body and Other Parties, Carmen Maria Machado’s electrifying debut.

The genre-bending stories collected in Her Body and Other Parties weave fables, urban legends, gothic literature, and popular culture to create moving narratives about female selfhood. In “The Husband Stitch,” a folktale about a girl whose head is held on by a ribbon (famously collected in Alvin Schwartz’s In a Dark, Dark Room) becomes the basis for a story about misogyny, sexuality, and the values embedded in the stories we tell. “The Resident,” an eerie tale of a writer’s experience at a residency gone wrong, tackles the problem of the “madwoman in the attic,” and how some tropes limit our ability to write about mental illness and women’s emotional lives.

Many of these stories take place in worlds much like ours, but their psychological realism is punctured by the fantastic, supernatural, and apocalyptic. The story “Inventory” at first seems to be a record of one woman’s sexual encounters, but as the narrative goes on, disaster creeps in: a deadly epidemic sweeps the United States, decimating its population. The narrator’s chronicle of her romantic and erotic experiences becomes inextricable from her experience of the end of the world as we know it. An altogether different affliction plagues the world of “Real Women Have Bodies:” women suddenly, inexplicably flicker out of existence, becoming incorporeal.

One of the collection’s boldest narratives, “Especially Heinous,” takes the long-running police procedural, Law & Order: Special Victims Unit, as its point of departure, and brings familiar characters into altogether new and unusual territory. Using twelve seasons’ worth of episode titles to guide the story, Machado transforms SVU into a tale of doppelgängers, ghosts, and girls with bells for eyes.

Machado skillfully handles the introduction of these elements, pacing her stories in a way that destabilizes the reader’s sense of what’s real: just when the world seems comprehensible, the ground shifts beneath our feet, deepening and complicating our understanding of the characters, their motives, and their lives.

The genres Machado draws on have not traditionally been hospitable to women (much less queer ones): scholarship on both fairy tales and horror have long pointed out these narratives often punish women for deviations from normative gender roles and reward only those who are pure and obedient. Part of what makes Her Body and Other Parties so exciting is Machado’s negotiation of this legacy. She understands the pleasures we derive from experiencing the uncanny, the horrific, and the fantastic, and knows exactly how to generate those sensations in her reader. At the same time, her writing rejects the strictures these traditions have placed on representations of women. Her protagonists are queer women, often unapologetic in their sexuality. Machado’s stories make space for women’s experiences of sexism; of love; of abuse; of mental illness; of motherhood; and of their ambivalent relationships to their own bodies.

Reminiscent of the work of Shirley Jackson, Angela Carter, Kelly Link, and Mariana Enriquez, Machado remixes strands of myth, horror, and pop culture and gives us something uniquely her own. Her Body and Other Parties is as much a thrilling reading experience as it is a powerful and important exploration of women’s lives.

'New Ways to Kill Your Mother: Writers and Their Families' by Colm Tóibín
Sara Jaffe: On Her New Novel 'Dryland' and Tapping into the Adolescent Mindset
‘At Night Only’ by Christopher Stoddard