Blacklight: In Bollen’s ‘The Destroyers’, the Sun-drenched and Seedy Greek Island of Patmos Steals the Show

Blacklight: In Bollen’s ‘The Destroyers’, the Sun-drenched and Seedy Greek Island of Patmos Steals the Show 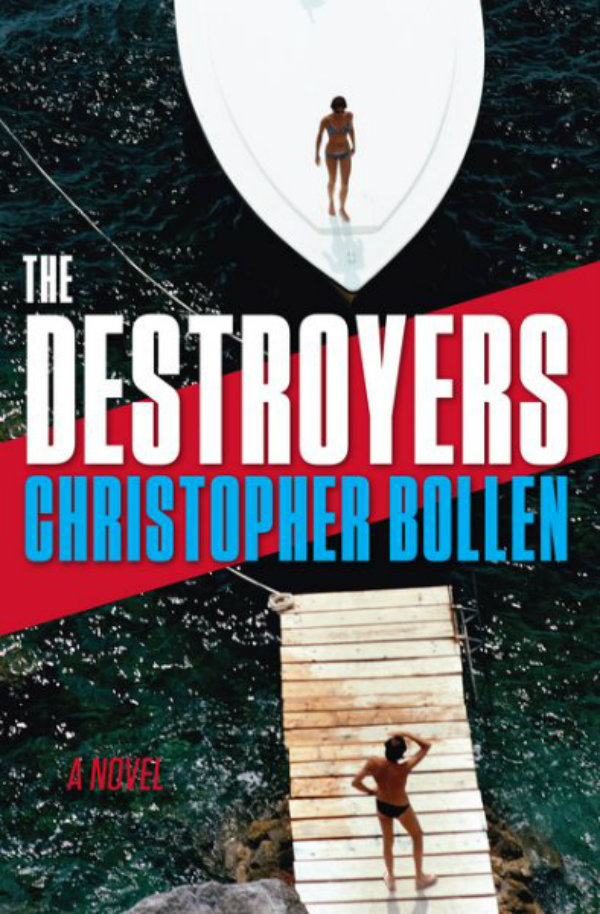 In Christopher Bollen’s third novel, The Destroyers, we luxuriate in the beauty of Patmos, its whitewashed mansions, its glassy water, its looming Monastery of Saint John. We peer voyeuristically over the shoulders of its denizens, both its native islanders and its wealthy vacationers. We enter a richly imagined world, a lush backdrop for a story about the collision of the colonizing American elite and the island’s indigenous community. Like Patricia Highsmith’s brilliant The Talented Mr. Ripley, to which Bollen’s novel has been compared, we delve deep in an exotic Mediterranean milieu. Unlike Ripley, which aligns the reader with a morally dubious perspective, Bollen’s novel, while compulsively readable and psychologically astute, offers a conventionally moral point-of-view.

The novel begins with Ian Bledsoe, broke and estranged from his family after the death of his father, arriving on Patmos to reconnect with his charming and volatile childhood friend, Charlie Konstantinou. Under the warm Aegean sun, Ian joins Charlie’s entourage, comprised of Sonny, a self-involved American actress and Charlie’s love interest; Miles, a beleaguered British blue blood who fauns over Sonny; Rasym, Charlie’s hard-edged cousin; Adrian, Rasym’s lover, a serene and self-possessed German adonis who Ian feels strangely drawn to; and Louise, a girlfriend of Ian’s from his college days, who is keen to rekindle their romance. Ian also becomes acquainted with other islanders: the locals who Charlie employs in his Yachting company, and the wealthy and menacing monks who lease the waterfront property to Charlie’s company. Charlie serves as the nexus for all these groups, most of whom rely on him in one way or another for financial support. When he goes missing, the precarious balance among the hangers-on, employees, and landlords topples. Ian, who Charlie enlisted to help him run his yachting company, must face the criminal underground in Patmos, his new friends’ many secrets, and the ugly truth about Charlie.

The Destroyers is replete with sumptuous descriptions and carefully observed detail, bringing to mind F. Scott Fitzgerald. Take for instance our introduction to the island: “Patmos was a wheeze of color: bleach-blond dust, scrub brush of wiry green, the wet-metal shine of water, and low walls blooming sinus pinks … Human bodies were scattered along the beaches, silver and limp in the sticky heat.” Bollen creates a complex portrayal of place, and along with the stunning scenery, he takes care to delineate the island’s social strata and the complicated unrest therein. In that sense, the island steals the show.

Bollen is also a superb writer of scenes, a quality he shares with the great Patricia Highsmith. As characters dine, chit-chat, and drape themselves across the bows of  yachts, the underlying tensions surface gradually, a slow boil, until they satisfyingly crescendo in violence. By the conclusion of the novel, we have a clear understanding of motivations and relationships between characters, not to mention their particular moral perspectives.

What greatly differs from Highsmith is that the reader never feels aligned with a character whose moral viewpoint is at a tilt; in other words, we never have to grapple with liking a character who does bad things, like a Tom Ripley. Ian, although tempted by the lure of money, never really breaks bad, which as a reader, secretly, guiltily, I kept hoping for—or that he might be seduced by another character’s blinding charm or sex appeal. Highsmith is brilliant at implicating the reader and forcing us into morally uncomfortable terrain, suggesting (perhaps) a lack of stability in our own moral compasses. Bollen doesn’t accomplish that, as some of the critical praise may imply. To be fair, though, that moral queasiness may not have been the writer’s intention. Whatever the case, as a smart, tense, and masterfully scenic thriller, you can’t do better than The Destroyers. It’s escapism at its best.

Édouard Louis on Literature as a Weapon, Marlon James's New Epic Fantasy Series, and more LGBTQ News
“!”: Bookphile Seeks Free Book for Review, is Rewarded with Barry Webster's 'The Lava in My Bones'
'Winter Kept Us Warm' by Anne Raeff