‘Advice from the Lights’ by Stephen Burt

‘Advice from the Lights’ by Stephen Burt 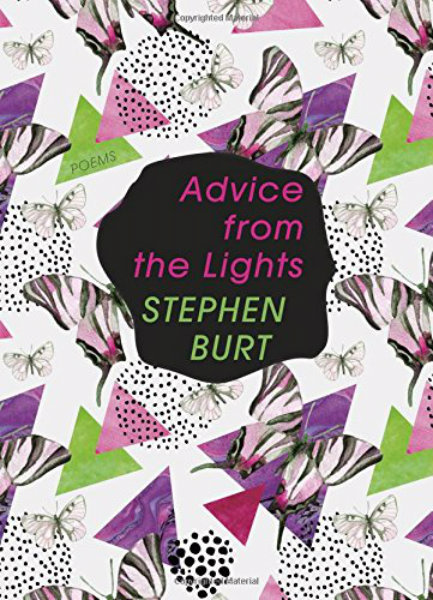 Steph Burt’s new book, Advice from the Lights, is two things. On the one hand it is deft, bubbly, poised, polished, consistently witty, affecting an air of light verse, very composed. On the other, it is a document of barely constrained, messy emotion. Maybe it is something else as well: a puzzle.

Most of the book is in personae, threaded through several different sequences. A series in which animals (bettas, roly poly bugs) and inanimate objects (a block of ice, a flashlight) speak, or are spoken to, humorously. A related series in which objects, places, or concepts, offer, or are offered, dubiously helpful advice. A series of updatings of the ancient Libyan-Greek poet and critic, Callimachus, who now references pogs, Minecraft, and jelly shoes. A series in which avatars of the poet at different ages step forward to tell us, with charming solemnity, about their years. A series of “Stephanie” poems (previously published in a chapbook) in which the girl the author didn’t get to be is granted tentative, subjunctive life.

The immediate effect is not polyphony, much less babble, but single-minded playfulness. Burt dashes in and out of these viewpoints, catching a perception, cracking a joke, moving on. The poet resists being trapped in the serious, thrown off balance–she embraces flightiness:

And she is good at it, too. Sometimes dazzlingly so, as in this poem where her childhood self speaks from “My 1980”:

After I came back from the opticians,
gold backs for earrings, aglets and fish scales,

but evident in separate outlines, sad
as Atari pixels with their 8-bit math.

There is so much clarity and brightness in this passage about leaving myopia behind. It is in the unexpected connections between the three small shiny things, the two pristine edges in danger of fraying, highlighting their visual qualities. It is in the simile, humorously period-appropriate yet precisely descriptive. It is in the sentence structure, where delaying the verb insists on the things seen over the significance to be derived from them. It is even in the line breaks, which mostly end-stop sharply, but which also, in the sudden enjambment in the fifth line, throw a spotlight onto the keyword: sad.

“Sad” is spotlighted, but, by the same measure, it is hurried past. This passage describes sadness at how disappointing the word is when you are able to really look, but it works to evoke joyful verbal agility, in which poetic skill allows us to escape or transform pain. The virtuosic playfulness of these poems seems calibrated to encourage us to read them as jeu d’esprits, and it is certainly possible to speed through the book, carried along by its energy and inventiveness.

If we manage to slow down, however, we might notice that many (not all, but many) of these seemingly-almost-weightless poems are freighted with wishes. And wish-fulfillment, as we are told in one of the book’s least ludic poems, “Sadness”:

Thus the Stephanie poems, for instance, seem to figure a girlhood, to indulge wish-fulfillment, but what they actually speak of, and try to adjust to, with limited success, is its loss or absence. The “animal vegetable mineral” poems seem to inhabit radically other ways of being in the world, but what they carry is the difficulty of adjusting to the fact that we can’t:

I could multiply examples, but the point is clear. If we forget their framing as kennings, and take them as plain statement, the voice of a trans speaker learning to painfully negotiate the ineluctability of the world suddenly speaks directly, inelegantly, in the requisite messy intensity, through these personae. The poems may seem fleet and joyous, but Burt skillfully calibrates this fleetness so as to betray, on close inspection, the strain with which it is achieved.

But: only on close inspection. We can say: this is a book with a brilliant surface concealing murky depths. But this begs the question: why are they being hidden? If we can consider Burt’s style as simultaneously encoding the flighty and the intensely emotional, the escape attempt and the thing the speaker wishes to escape, we can also consider it as a protective mechanism. There is a long history in queer art of putting your content behind barriers. If this is famously true of gay and lesbian art, like Djuna Barnes’ Ladies Alamnac, it is equally true of trans art. For instance, in trans text games like Porpentine’s Ultra Business Tycoon III or Winter Lake’s Rat Chaos it is necessary to solve a number of puzzles before finding out what the game is actually about.

Burt too requires her readers to get past riddles, of a more literary kind, in order to know her heart. This is her first book of poetry in which her potted biography identifies her as “sometimes Stephanie” but it is the fourth book she has published in an illustrious career. I am sure those readers who already admire her work will enjoy Advice From The Lights hugely. But I also think this book has the potential to speak movingly to a trans audience, and I hope it finds one.

'Into?' by North Morgan
Cory Silverberg : On His New Book 'Sex is a Funny Word' and Sex Education for Kids
'The Future of Another Timeline' by Annalee Newitz