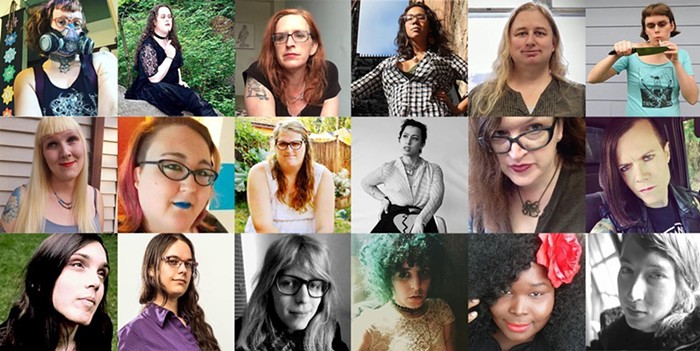 The new anthology Resilience has been garnering press for elevating the voices of trans women and non-binary people.

The National Book Foundation have announced the nominees for the 2017 National Book Awards. Nominees include Danez Smith‘s Don’t Call Us Dead: Poems and Carmen Maria Machado’s Her Body and Other Parties: Stories.

Speaking of Her Body and Other Parties, author Carmen Maria Machado and cover designer Kimberly Glyder sat down with Liz von Klemperer to discuss the imagery on the book’s cover.

As for “love and regret,” though there are more breakups than weddings in the book, it’s mostly because poetry gives me a place to put sorrow. And because I think joy is harder to write. I’m always gratified when the hope in the poems comes through.

The Gay and Lesbian Review interviewed Salman Rushdie about his 12th novel, The Golden House, the madmen of great civilizations, and the LGBT experience outside of the Western world.

Gertrude Press is launching a queer book club, called GERTIE. GERTIE’s goal “is to give support to LGBTQ, literary writers and get them to their audience” Find out more the book club here.

In the summer of 1997, I was a chubby, white 11-year-old in a mostly Latino and Filipino suburb of San Diego who happened to be named Andrew. But to most of my classmates in Mrs. MacKay’s 6th-grade class at Harbor View Elementary, for that summer and most of the fall, I was Andrew Cunanan. I was vaguely aware at the time that my new nickname was in reference to the man who killed Gianni Versace in his Miami Beach mansion that July, because this had been widely reported by TV news on both national and local scales.

The Madonna of Bolton by Matt Cain was rejected by over 30 publishers for being “too gay” but, after turning to crowdfunding support, has been able to find its audience.

(Images via The Stranger)