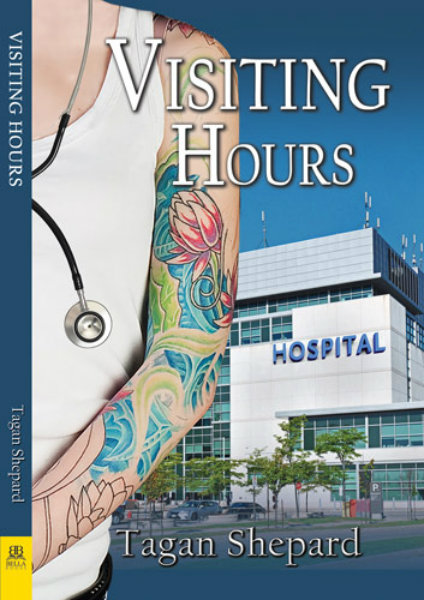 Professor Alison Reynolds is an academic with a teaching career at Virginia Commonwealth University (VCU) in Richmond. She has her teaching position and her friends, but, it seems, she has no interest in dating because past history has made her wary. Her best friend, Beth, is in the university hospital due to complications with her second pregnancy, bringing Alison for a visit, and giving the story its title, Visiting Hours. The visits will start an unexpected stream of life-changing events for Alison.

Dr. Jess Baker is an up and coming doctor, new to VCU, who has recently been recruited from Portland, Oregon. Jess is still settling in and unsure about living in the South. Her experience, credentials, and reputation brought her to Richmond. Now she’s working as hard as she can to save Beth’s unborn child from becoming another in a long line of miscarriages.

When Ali visits her friend, Beth, she has no idea of the impact it will have on her future. Lost in a maze of hospital corridors and searching for her friend’s room, she encounters a young woman with spiked hair, sporting tattoos, and assumes she is a visitor also. So imagine her surprise when she discovers the woman is a doctor, and later finds out she is none other than Beth’s beloved physician.

Ali’s quickly formed prejudices against the young doctor, along with her drive to protect her best friend’s interests, lead to a few acerbic and challenging encounters with Jess. And when Jess tries to express interest in Ali, it becomes a case of “the lady doth protest too much.” As the story unfolds, these two women’s lives become inextricably intertwined, beginning with a chance encounter in a local lesbian bar, which puts the first “chink” in Ali’s armor. And when the women are drawn together over and over again, in a professional setting, and later, during personal encounters, Alison’s defenses begin to break down and attraction blossoms, allowing her to see Jess’ appeal and admit her feelings to herself. However, this isn’t the end of the story—far from it.

Shepard has Alison tell us she is bisexual, and this gives Ali the reason to be guarded over the possibility of a relationship with a professed lesbian. In spite of this, the story about these female characters is solely about them and their feelings for one another—and the main characters initial encounters are entertaining and heart-warming. Jess is charming with a bit of rogue-flare, yet she shows a sensitive, daunted side when interacting with Ali. For her part, Ali puts up a defensive front that’s difficult for her to overcome, but when she does, dealing with her feelings makes for some well-written, emotional scenes.

Minor character Beth has a large role to play making sure these two characters have a chance for a relationship with one another. Her confrontation and challenges to her best friend help keep the story moving in the right direction. Beth’s part is well written and she never overshadows Ali and Jess’ main story, though she contributes to it. Alison’s teaching assistant, Jennifer, is almost Jiminy Cricket-like to Ali’s Pinocchio, challenging her to open up, be her true self and follow her heart in all things personal.

The crisis, when it comes, is both heart-wrenching and appears to be a deal breaker for both women. The emotion portrayed is raw and deeply moving with Shepard taking us through the bleakest time in the lives of the main characters, allowing us to feel the darkness and suffering they experience.

The final denouement of this story takes a surprising turn, but it makes sense given the relationships among the characters, and it wraps up the story well for them and the reader. Visiting Hours is an emotional tale filled with denial, pain, struggle, commitment, and finally, more than one kind of deep, abiding love.