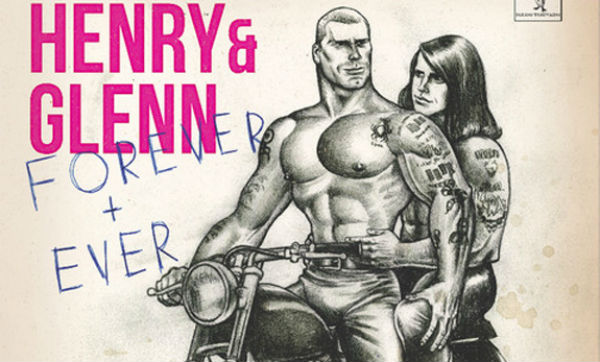 Henry Rollins and Glenn Danzig are fundamentally inseparable in the pages of Tom Neely’s queer punk comic/art zine/cult classic Henry & Glenn Forever & Ever: The Completely Ridiculous Edition. With this new release, Microcosm Publishing has compiled seven years of Neely’s original comics and art, alongside work by artists both involved in Henry & Glenn’s original inception and those who later joined the fan base. This hardcore collection is a joy to look at, suffused with fun from the tender moments of gay domestic bliss, to Danzig’s satanic invocations, to Henry and Glenn’s cultist neighbors John and Daryl. Henry and Glenn are truly a match made in heaven as they contend with Henry’s increasing success, Danzig’s emotional outbursts, and occasional demonic dangers.

To the unaware, Henry Rollins and Glen Danzig are both icons of punk rock, Rollins as the singer of Black Flag and Danzig as the singer of The Misfits. Both men have gone on to have long careers, and a quick skim through their Wikipedia pages will catch anyone unfamiliar with either man up to speed. While the majority of the humor in Henry & Glenn focuses on their fictional domestic life, their actual lives will occasionally appear to cause relationship tension or as a pointed joke. Neely’s original work is highly reminiscent of the The Family Circus, with thick, simple lines and exaggerated physical traits. The work of contributing artists ranges drastically from the muscle-bound hairy sensuality of Ed Luce to various depictions of surreal and gruesome horror. This vast range of imagery makes Henry & Glenn Forever & Ever endlessly engaging, and each subsequent return to the collection will reveal new jokes and foster a greater appreciation for the collection’s artistry.

Henry & Glenn is far more than a seven-year-long dumb joke. As Neely states in a letter near the end of the collection, “It seemed like the dumbest idea we ever had! So naturally it turned into a cult-hit among music nerds and punk/metal fans.” Despite beginning as a fairly surface-level parody, the continued success of Henry and Glenn can be attributed to the genuine emotion being displayed. While the two punk icons’ romance is constantly plagued by both supernatural threats and mundane inconveniences, they stick together. At its core, Henry & Glenn is sweet; for all the machismo and grim angst both men display, they clearly love and rely on one another. Neely’s main work doesn’t depict a couple in its early days, but rather a tried-and-true relationship between life partners. That said, for every touching moment there are several that poke fun at the very idea of a dignified love story. In Mark Rudolph’s “How the Chores Thrill,” Glenn embarks on an epic quest to clean the house and help out Henry, culminating in a heroic struggle to pull a sword from a stone—only for it to be revealed that he’s simply unclogging their toilet.

Neely’s humor isn’t mean-spirited, but it is still satire, and with that label comes an expected amount of irreverence, something that Danzig (a famously ill-humored misanthrope) has openly insulted. Rollins has stated in interviews that he finds the concept amusing but has no inclination to actually read any of Neely’s work; Danzig, on the other hand, has angrily denounced the whole idea, stating in an interview with Rolling Stone “I thought it was a crappy, opportunistic book. People are very stupid.” Danzig’s derision may be well-documented, but don’t let his inability to find humor in himself deter you. Henry & Glenn Forever & Ever: The Completely Ridiculous Edition is well worth your time. The collection displays an astounding amount of diverse work, and just about every reader will find something to giggle at in the goofy and loveable relationship of Henry and Glenn.

Ansel Shipley is a graduate of SUNY Purchase College with a degree in literature. While there he was the senior literary editor of the student-run art and literature publication Submissions Magazine. He currently lives in Brooklyn where he writes freelance critical reviews.