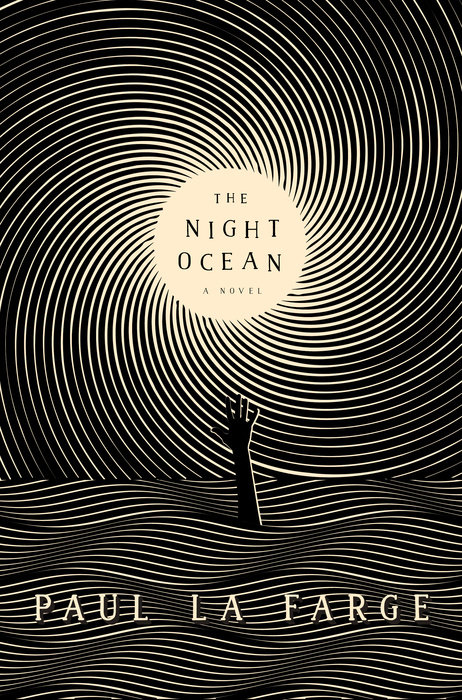 In this column I primarily review mystery novels that, aside from positioning LGBT characters at the center of their narratives, conform to the standards of the genre. Occasionally, though, I want to push beyond the clear boundaries of the genre and review a novel that doesn’t fit neatly in any category. Paul La Farge’s rich, complex, and resonant The Night Ocean is one such novel.

The Night Ocean is not marketed as crime fiction, nor like the fiction of its principle subject, H. P. Lovecraft, is it marketed as horror. However, it unfolds much like a crime novel: a mystery is presented, characters behave as amateur detectives, clues are uncovered, and the plot takes many twists and turns. It also is a horror story: Like Lovecraft’s short stories and novels, at its core, it’s about the horror of the unknowable—that forbidden knowledge which can unwind our sanity and shake our sense of reality. But in this case, the unknowable isn’t a vast supernatural beast, Cthulhu rising from the ocean floor, but rather an existential horror: Can we really know each other? Can we really know ourselves?

La Farge’s novel begins with the disappearance (and perhaps suicide) of Charlie Willet, a writer and researcher obsessed with H. P. Lovecraft, “the greatest practitioner of the classic horror tale,” according to Stephen King. In particular, Charlie is obsessed with the summer of 1934, during which Lovecraft, famously averse to discussing sexual matters, may have had an affair with a sixteen-year-old fan named Robert Barrow, as detailed in Lovecraft’s posthumously published (and much debated) 1952 memoir called the Erotonomicon. Charlie’s obsessive detective work—flittered through the perspective of his frustrated and loving wife, Marina—leads him into a mirror maze of the past, yielding surprising results that launch the couple into a scandal which paves the way to Charlie’s breakdown and disappearance.

The novel is an excavation of narrative layers which, more than the subject matter, makes it a kind of detective fiction. La Farge structures it by embedding narrators within narrators, like nesting dolls. Marina is our guide; she’s patient, incredulous, and ultimately bewildered, an outsider witnessing her husband’s strange obsession with first reluctant acceptance, then concern, and finally anger and grief. Nested within Marina’s narrative is Charlie’s. He is the exuberant detective, desperately wanting to understand what transpired between Lovecraft and Barrow. Nested within Charlie’s narration is Lovecraft’s story, the Erotonomicon, the authorship of which is famously disputed, a mystery which La Farge exploits to great effect. As the novel unfolds and layers crumble away, we move closer to that elusive bedrock—the truth. Once Charlie vanishes, Marina loses her rational distance from the events and absorbs her missing husband’s obsession with the Erotonomicon and begins her own interrogation of the past: Did Lovecraft love Barrow? Was he gay? Who wrote the Erotonomicon? And ultimately: why did Charlie want to know? Who was this man she loved and lost?

La Farge is wonderfully skilled at revealing the textured psychology of obsession, while making us as readers complicit. We become obsessives, hungrily turning page after page, sorting through an ever-deepening strata of narrators and slippery historical details and even more slippery historical characters, like William S. Burroughs, Roy Cohn, and L. C. Spinks. Just as Marina wants to understand Charlie, or Charlie wants to nail down Lovecraft, we want to know what truth lies at the murky bottom of The Night Ocean, an impulse any fan of crime fiction can identify with. In the end, La Farge doesn’t so much answer these questions as fully explore them, a technique he takes from Lovecraft. Uncovering the absolute truth about these characters isn’t his point, but rather, it’s that we can only know the world through the accumulation of stories we tell about each other and ourselves. The difficult thing to accept—the existential horror—is that many of those stories may not be true.