‘The Blue Spong and the Flight from Mediocrity’ by St. Sukie de la Croix

‘The Blue Spong and the Flight from Mediocrity’ by St. Sukie de la Croix 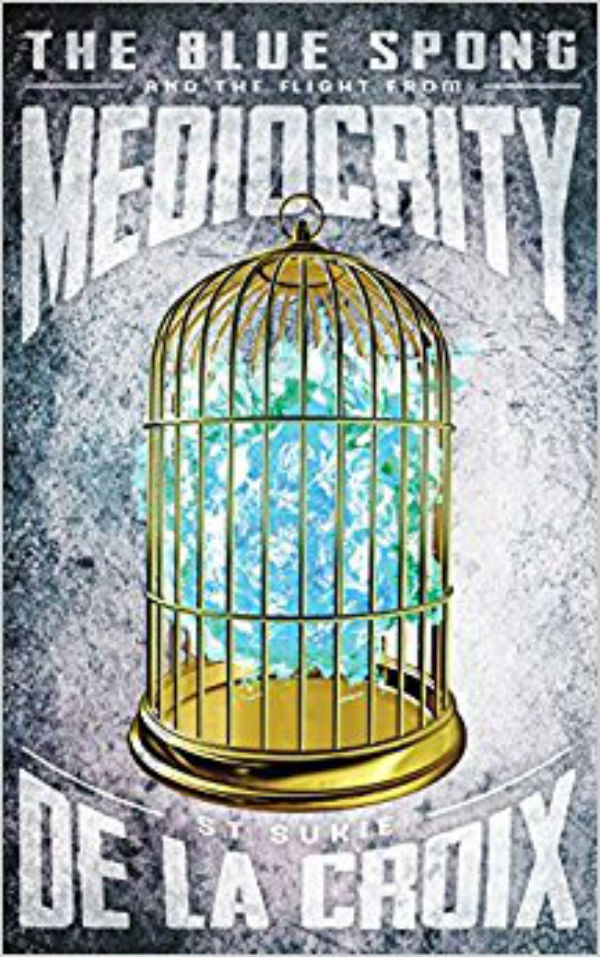 mediocrity (n.)- the quality of being average or ordinary. From Middle French mediocrite, “moderation; intermediate state or amount” and directly from Latin mediocritatem, “a middle state, middling condition, medium.” Mediocrity began to take on a negative connotation in the late 16th century. Prior to that time, the Golden Mean had been called “the Golden Mediocrity” (dictionary.com).

The best critics and satirists of heterosexual life have been gay men. From Oscar Wilde’s classic The Importance of Being Earnest to Thornton Wilder’s play Our Town to Alan Ball’s American Beauty, gay men have always revealed the deep flaws in the straight-jacketed heteronormative culture considered to be “the norm,” while subtly showing the brighter aspects of queer culture. When the United States and Russia both want to turn back the clock and return to old-fashioned “family values,” it is time for someone to take a flame-thrower to that notion. That someone is St. Sukie de la Croix, and his weapon is his latest work, The Blue Spong and the Flight from Mediocrity.

In The Blue Spong and the Flight from Mediocrity, author St. Sukie de la Croix uses the concept of mediocrity as a metaphor for a heteronormative life dictated by religion, patriarchy, and colonialism. His story focuses on the Clam sisters, who are forced to live as single, sexless recluses as a condition of their father’s will–so they can remain living on his estate. This does not bother the sisters in the slightest, as they have no interest in anything except cakes, parrots, reading, and attending instructional sessions on topics such as the care and polishing of the family silver. The sisters enjoy each other’s company, and also have a live-in cook, maid, and a chauffeur, each with their own mediocre struggles. Life would have continued this way if Charlotte, the parrot lover, did not bring home a mysterious blue spong from an exotic bird shop. The spong helps each person in the house—as well as their lovers—overcome their fears, examine their sexualities, and fly from their mediocre life. According to de la Croix, it is the mediocre life that one should fear:

A mediocre life is one where over the horizon lies a sleeping dragon that does not exist. You know he doesn’t exist and yet you still fear him. A mediocre life is one where, every minute of the day, you miss the toilet and pass water on your dreams. Life should be a blissful chaos, filled with an unpredictable wonderment of never knowing what will happen next. A life where the doors are left unlocked and strangers wander in, sit down at the table and tell you stories of other places, other times, and other worlds. Life should be a place where the     branches on the question mark tree are always hanging heavy with fruit.

Today’s generation of Americans, due to economic and political uncertainties, are being discouraged from taking the road less traveled or living their dreams. The Blue Spong is for them. A fast read at less than 100 pages, this novel is a lively, fantastic romp through a rainbow birdbath. de la Croix has a gift for painting memorable characters and scenes in short, sharp prose that alternately soothes, sings, scolds, and slaps you in the face. One minute you are reading scenes from a Wizard of Oz-like fairy tale, the next a horror story, the next a slapstick romantic comedy. Music and songs from the era permeate the story, from early camp drag songs to the blues. Facebook followers of de la Croix will not bat an eyelash at this outrageousness; nearly every morning de la Croix shares brief, off the wall stories of who and what he observed in the birdbath before taking his morning tea, hence this fascination with the mythological powers of exotic birds.

de la Croix is best known for his award winning work Chicago Whispers: A History of LGBT Chicago Before Stonewall (University of Wisconsin Press, 2012), based on his work as a tour guide of LGBT Chicago monuments and later his work as a journalist at the Windy City Times. This encyclopedic knowledge provides the strong historical foundation for de la Croix’s novel set in early 1920’s Chicago. Through the fantastic blue spong, de la Croix delivers his readers to real places in Chicago that they never imagined—Peking opera houses complete with female impersonators in Chinatown, African-American jazz joints where everyone danced (and were busted by the police with more frequency and ruthlessness than white clubs, where roughly the same things were happening), and the neighborhoods teeming with artists, gays and lesbians, psychics, and revolutionaries.

All is described as if in a dream. And yet, in today’s world, how much do we not know and do not see, underneath what is presented to us through social media? How many white LGBT people—even those who support the Black Lives Matter movement, protection of the undocumented, and liberation for all—have truly walked through these different worlds and experiences? Through the personal journeys of each character in the book, trickster de la Croix will make you laugh and rethink the chains of your own reality—no drugs required.

‘Wonderland’ by Stacey D’Erasmo
'That Door is a Mischief' by Alex Jeffers
From Figs to Oranges: Madeline Miller on 'The Song of Achilles'