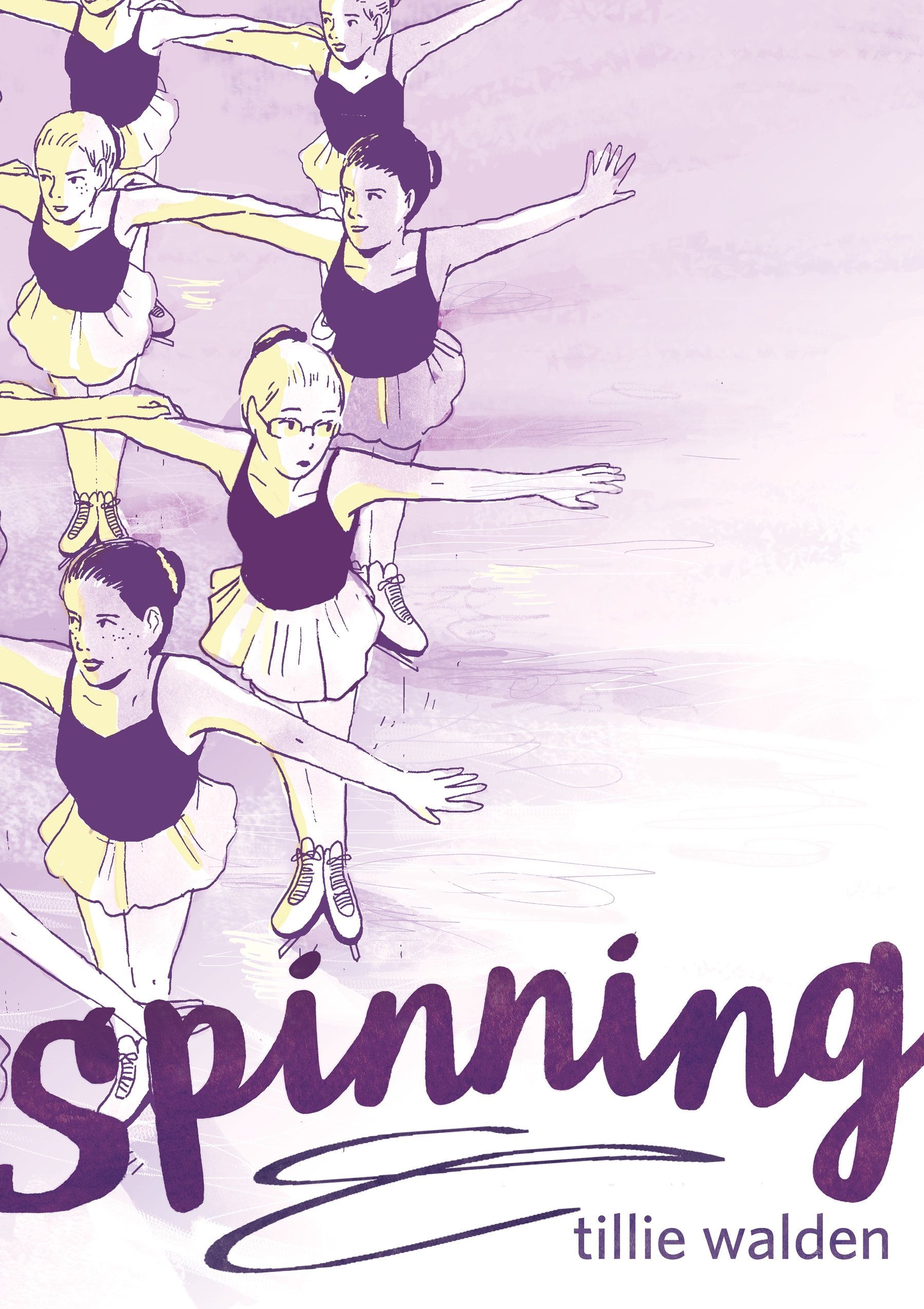 Malcolm Gladwell declared that it takes 10,000 hours of deliberate practice to master a skill. Although that doesn’t hold true for success in all fields, “practice makes perfect” is generally the mantra in any talent involving repetitive, predictable skills or moves.

Problem is, to get these many hours of practice in, you pretty much have to start when you’re young. And the younger the better. Some kids are born prodigies, drumming on pots and pans as toddlers until they get their own drum set, impressing adults with sports or chess moves way advanced for their age. But other kids–well, most kids–need lessons, prodding, and hours and hours of practice.

In the graphic novel Spinning, author and illustrator Tillie Walden recounts the ten years she spent in competitive figure skating, from childhood through adolescence. She begins as a child, taking skating lessons and entering competitions in New Jersey, but in fifth grade, her family moves to Austin, Texas. She’s forced to start over at a new elementary school, and taking skating lessons from a new teacher. At school, another student, Grace, bullies her, so skating becomes a kind of after-school refuge. Not a refuge from everything, however: Tillie develops a secret crush on another girl, Rae, at the same time she’s forced to play along with straight classmates’ finger-counting games that supposedly reveal if “you’ve ever met a homo.”

Unlike the other girls’ folks, Tillie’s parents rarely come to events.

I always wanted to feel like I didn’t care that my parents rarely made an appearance at competitions. But I felt something. It wasn’t sadness. More like embarrassment. I was always the only girl in the locker room without a mom, the only one who didn’t have family members lurking around the results area. So I made Lindsay my family.

Her friend Lindsay becomes her confident and skating friend–so much so that the book is dedicated to her.

Time passes, clocked through practice and competitions. Tillie and Rae eventually hook up. Tillie describes her first kiss: “It wasn’t the thrill of freedom I felt that I remember–it was the fear.” While they have some good times together, the foreshadowing of fear comes to fruition when Rae’s mom discovers the girls’ romance and forbids them to see each other or communicate (this is Texas, remember). Still, Tillie bravely comes out to family and friends, and although most are fairly supportive, it’s another part of her that seems at odds with the figure skating stereotypes that surround her.

After witnessing a car accident, she has a secret epiphany: she realizes doesn’t want to skate any more. But it takes her a while to act on that gut feeling, and it isn’t until she has to make decisions about college that she’s forced to step out of her lethargy, quit skating, and cultivate her artistic skills instead. In the process of deciding, she observes, “I was starting to realize that skating wasn’t what it seemed. I always thought of it as simply a sport. But with that sport came a lifestyle. And it wasn’t optional. “

This book is long, a whole adolescence really, and Walden admits in the afterward, that she includes a lot and feels she’s one of those writers where, “the meaning found it’s way in by accident.” Her drawings are exquisite, done in dark purples with lavender washes, highlighted by flashes and keyholes of yellow, that psychologically parallel both the murkiness of adolescence and it’s golden brilliances of joy and self-discovery. The colors and art also skillfully and emotionally reflect the settings where this takes place, the competition ice rinks, the hotels where the girls stay, the darkness of getting up at 4 a.m. to practice, the lit-up glow of a competition, or the hug of a friend.

Readers can’t help but be glad that Walden hung up her skates in exchange for art. Spinning joins other adolescent accounts (Hoop Dreams, for instance) that counter the myth of success promulgated by American Idol-type shows–that there’s only value in winning and that if you work hard enough and are deserving enough, your dream will come true. Kids need to know that this kind of success isn’t always equitable or fair, and for every one winner, there are many more “losers” who find their own alternative successes. Spinning is an essential story for young readers about how losing or quitting may be the best way to win.

‘The Smuggler, The Spy and The Spider’ by Diana Rivers
A Queer Take on James Franco's 'Straight James / Gay James'
'The Boys from Eighth and Carpenter' by Tom Mendicino