‘The Pox Lover: An Activist’s Decade in New York and Paris’ by Anne-christine d’Adesky

‘The Pox Lover: An Activist’s Decade in New York and Paris’ by Anne-christine d’Adesky 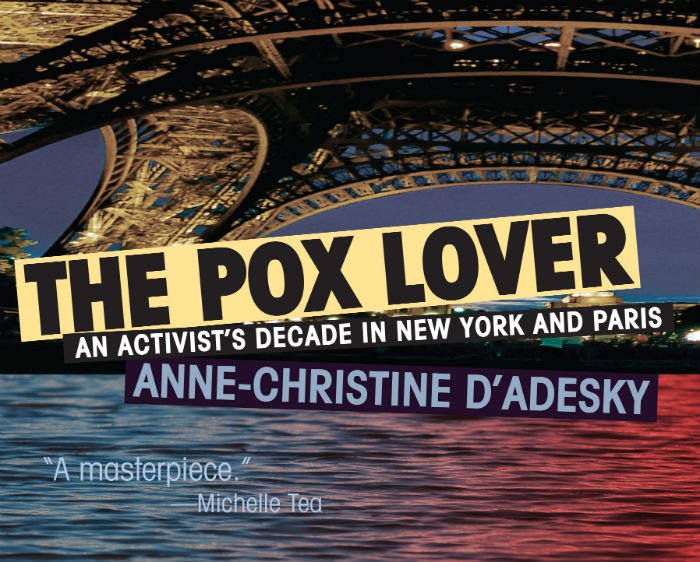 The bloodied emotional battlefields of AIDS activism, national and familial histories of fascist collaboration, the storms of a personal life torn between continents, the rising threat of neofascism, and the universal pyroclastic flows of desire and disease: these are the urgent themes of Anne-christine d’Adesky’s new “activist diary-cum-battlefield-notes-cum-travelogue,” The Pox Lover, a memoir of her life and work between Paris and New York in the 1990s.

Not content to frame her project only as memoir, reportage, or theory, d’Adesky has created a powerful and welcome addition to the literature on AIDS, the politics of emotion, and very recent queer history, even if she sometimes sacrifices coherence for the sake of ambition. But when the book leaps frustratingly between continents or shunts aside one developing theme for the sake of another tangent, one still feels extraordinarily close to its characters, only inches away from their worries, their dreams, their hopes.

D’adesky spent the ‘90s in activist transit between New York and Paris. In the gentrifying East Village, her world was full of housing protests, queer subcultures, ACT UP New York and the Lesbian Avengers. In Paris, she became involved in the very different but equally urgent work of ACT UP Paris. There, she also found herself obsessed with a homeless woman, who in the book comes to stand as a metonym for desire and disease; interviewed waves of exiles from political disaster and genocide in Haiti, Rwanda, and the Balkans; and investigated her own family’s complicity in the Vichy regime amid a rising wave of far-right politics around the world. In both cities many of her friends, mostly gay men, seroconverted. At first they died an accelerating rate; then, as the fruits of activist labor begin to bear and better drugs became available, they came to live at uneasy peace with the disease.

If this sounds like an embarrassment of riches, it is. Readers seeking neatness in analysis, or a background introduction to the battles and histories d’Adesky participated in, will be frustrated by the book’s density and fractured structure, in which hundreds of short sections, many less than a page in length, accumulate into twenty-one chapters, each covering a few months in one of her chosen cities. In reading The Pox Lover, I found it useful to have already read Moving Politics (Deborah Gould’s account of the emotional politics of ACT UP) and Hold Tight Gently (Martin Duberman’s dual biography of Michael Callen and Essex Hemphill, which doubles as an analysis of the racecraft of AIDS), to name just two of many books that sit more conventionally in the literature.

But that literature contains large gaps, and this book fills one: there are relatively few accounts of the affective experience of lesbians in the AIDS movement, and still fewer with d’Adesky’s breadth of scope. Anyone familiar with the historical outlines of the movements she discusses will take keen interest in her account. She raises urgent questions about the rise of the far right in the present and how it might be combated, in prose both powerful and intimate.

Near the end of the book, she issues what might serve as a pair of mission statements: “Let’s start telling stories that involve normal men and women and the all-too-human course of human genocide…how it’s a slippery slope from love-thy-neighbor to kill-thy-neighbor.” And: “ACT UP showed us—and showed me—we have the answers and we have the tools to fight back and win.” We still don’t understand the scale of the damage that AIDS has wrought, how it reconfigured relationships between queer generations and imploded crucial artistic, intellectual, and activist communities. In searching for answers from earlier holocausts, d’Adesky proposes one approach: the book is lit through with a profound generosity of spirit, with a humanistic impulse to understand and connect and fight for what is understood to be true. This is what d’Adesky suggests we need to repair our relationships and our communities, to combat the dangerous neofascist movements that threaten contemporary societies.

The Pox Lover is essential for anyone trying to seriously understand the recent queer past, the ripping between generations caused by AIDS’ death toll, or the sometimes-uncomfortable collaborations between lesbians and gay men that kept some people alive and created movements that demanded attention from the uncaring state. If d’Adesky reaches too far thematically, it is with the bright eyes and furious heart of someone fighting brilliantly for what she believes. Ultimately, her peripatetic style evokes the excitement of activist work, the powerful currents of emotion that undergird it, and the ways it can intoxicate, entrance, and sicken, much like desire or disease or death.