‘The Butch Lesbians of the 20s, 30’s, and 40s Coloring Book’ Edited by Avery Cassell and Jon Macy

‘The Butch Lesbians of the 20s, 30’s, and 40s Coloring Book’ Edited by Avery Cassell and Jon Macy 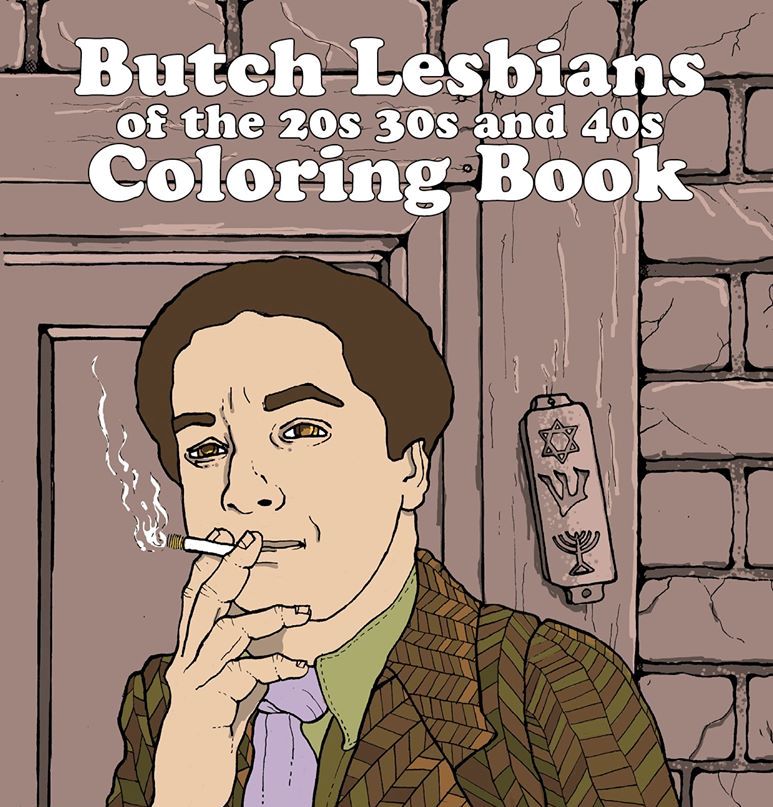 Following in the footsteps of The Queer Heroes Coloring Book, comes this second Stacked Deck coloring book featuring butch lesbians. Following the advice logo on the front of the book, “Feed Your Queer Brain,” this volume is more than just exercise pages for your crayons. Each of the artists who created drawings also contributed biographical information at the back of the book, about the person they chose to illustrate, or if anonymous, an explanation of the contribution the picture makes to the history of butch lesbian culture.

Famous folks are well represented. Billy Tipton’s portrait by Cheela Romaine Smith includes Tipton at the keyboards with a horn as part of the portrait. Ajuan Mance’s Gertrude Stein is framed in roses. Other butch lesbians who should be better known than they are, are included too. For example, Cherifa, Jane Bowles’ Moroccan lover, drawn by Jon Macy, is shown puffing a cigarette, surrounded by fun-to-color Moroccan decor. Bet Van Berren, drawn by Roberta Gregory, ran the Amsterdam bar Café m’t Mandje and “had a penchant for cutting off male customers’ neckties and hanging them from the ceiling like phallic trophies.” Travel writer and adventurer Annemarie Schwarzenbach, appears three times, drawn by Macy, as well as by Paige Braddock and Avery Cassell because “she was so fascinating and hot that we couldn’t help ourselves!”

But probably most intriguing and enigmatic are the anonymous photos. They show butch lesbians both most relaxed, and most under duress. Macy’s “Two Anonymous Butches,” features two relaxed women sitting on bar stools, in a mixed-race bar, holding hands, smiling. Macy describes them, “…our dykes are a little drunk and pleased to be sitting side-by-side, smoking cigarettes and relaxing.”

My sister, cartoonist Jennifer Camper’s entry “Anonymous Butch Mug Shot,” reminds readers that cross-dressing was illegal in the 1920s-1940s. She notes that “‘The three piece rule’ required that women wear at least three pieces of traditionally feminine clothing,” and that women weren’t allowed to wear pants on the Senate floor until 1993.

Other artists include Robyn Adams, Tyler Cohen, Dylan Edwards, Katie Gilmartin, Janet Hardy, Dorian Katz, Maia Kobabe, Tara Madison, Alix Quay, Sonya Saturday, Sina Sparrow and more. Avery Cassell did all the research for the book, and contributed the insightful bios of each artist. At the back of the book, there are some possible discussion questions by Ajuan Mance, about the changing concepts of gender, issues of applying modern terms of gender to people from the past, and a comparison of the artists’ styles. Shasha T. Goldberg sums up this collection of butch lesbians (historically coded as Inverts) in her introductory words, “Our proud, bold, brave, handsome, beautiful female Inverts.” What more could you want for coloring?