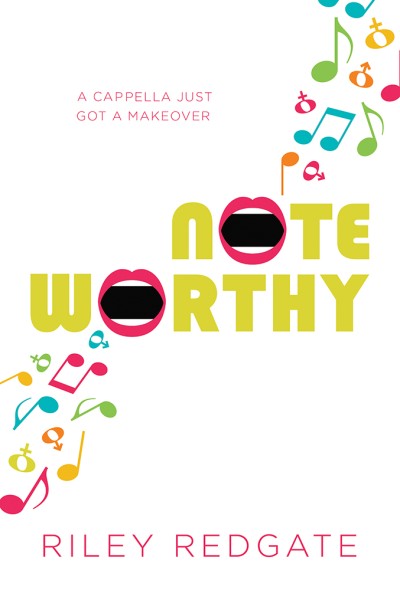 Imagine Victor/Victoria, just set in a modern day high school. Riley Redgate’s newest book Noteworthy follows the journey of Jordan Sun, a young artist seeking recognition for her talent, through any alternative means necessary, even if that includes disguising herself as a boy. When Jordan Sun transforms herself into a new male persona to join an all-male a cappella group, her old beliefs regarding gender and artistry begin to shift and alter for the better.

For about four years, Jordan Sun has attended a prestigious art-focused boarding school in the hopes of one day becoming a theater star. After repeated failed attempts to capture a leading role in one of the school’s productions, Jordan’s parents threaten to pull her out of school unless she can claim a legitimate role in one of the school’s shows. After discovering an opening in the local all-boys acapella group, the Sharpshooters, Jordan Sun decides to enlist as male alto, Julian Zhang. After joining the team, Jordan discovers new and unexpected bonds with her new teammates, all the while fearing the day she’ll be discovered for who she is, and wondering just how long she can keep her secret.

Relying upon the LGBTQ+ community’s strong roots in drag and gender-bending performance, Riley Redgate creates a hilariously captivating young adult novel based on one girl’s attempt to reject gender norms in order to achieve her dreams. Upon donning her male persona, Jordan finds herself questioning gendered ideas of “masculinity” and “femininity,” discovering just how freeing it is not to escape the stereotypes expected from female artists through male acapella. The characters are fun and dynamic, representing a number of unique and loyal personalities within the Sharpshooters, that makes the idea of joining any acapella group worth looking into, if just for the company.

If anything though, the book does stray into gray territory concerning the implications of a cisgender character using cross-dressing as a disguise, rather than as a marker of trans/non-binary identity. From the start to finish, Jordan solely identities as a cisgender female, which causes the story to loses potential in terms of an in-depth discussion on gender identity and roles. In her attempt to portray herself as a boy, Jordan often focuses on stereotypical definitions of masculinity, especially focusing on her “disguise” involving a short-haired wig and binding. The discussion of gender identity exploration in this book is left feeling incomplete as the book fails to provide named transgender or non-binary characters who could provide their own insight and experiences around gender and gender identity. At one point in the story, Jordan even admits to co-opting techniques from the transgender community on how to “pass,” acknowledging the book’s problematic treatment of gender. While the genre of women cross-dressing in order to gain access and privilege in male space, especially queer women, comes with a rich history, the book seems to negate this aspect, touching upon a more light-hearted, if somewhat shallow view on cross-dressing. Nevertheless, the book does question the gender essential-ism of “masculine” and “feminine” behaviors, as well as rejecting heteronormativity with Jordan, who identifies as bisexual, and other queer characters.

If you are a fan of acapella, gender bending, and young adult literature, then Noteworthy is well worth looking into. Riley Redgate’s Noteworthy is a well-written coming-of-age story about friendship, music, and exploration of identity in a young woman’s journey towards becoming her truest self.