Navigating Deadlines and New Found Pride: A Week in the Life of Kody Keplinger

Navigating Deadlines and New Found Pride: A Week in the Life of Kody Keplinger 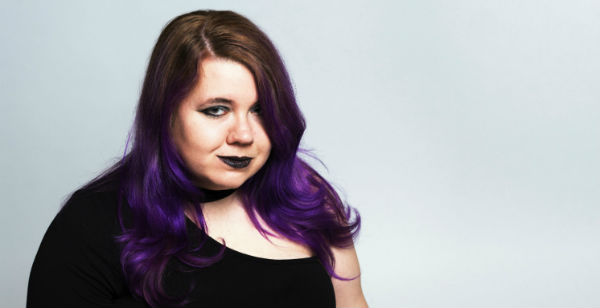 “A year ago I came out, and today I’m wearing my identity across my chest.”

This month’s  “Banal and Profane” column comes to us from writer Kody Keplinger.

Kody Keplinger was born and raised in small town western Kentucky, where she began her writing career after penning the New York Times and USA Today bestseller, The DUFF, at age seventeen. The DUFF was turned into a major motion picture and chosen as a YALSA Top Ten Quick Pick for Reluctant Young Readers and a Romantic Times Top Pick. Kody has since written other books for both young adult and middle-grade readers. Kody is also the co-founder of Disability in KidLit and a teacher at the Gotham Writers’ Workshops in NYC.

I wake up early. Well, early by my usual “I am on deadline and freaking out” standards, which means “before noon.” When I’m deep in a deadline meltdown, I tend to stay up until four or five in the morning then crash on my couch until the next afternoon. Not today, though. Today I have to head to Brooklyn.

I’m modeling for SmartGlamour, a body-positive clothing brand based in NYC. I’ve modeled for the owner, Mallorie, before, but this shoot is exciting. She’s coming out with a line of Pride tees, proceeds from which will go to various charities. So I drag myself out of bed (off the couch), try out the new foundation I bought the day before, and grab a cab. When I get there, Mallorie hands me a white, cropped t-shirt. It says “Queer” across the front in sparkling pink letters.

A year ago I came out, and today I’m wearing my identity across my chest.

When the shoot is done, I head back to Manhattan. This was fun, but books still have to be written. I order some Indian food and stay up late into the night working.

I wake up late with a black cat sleeping on my stomach.

I don’t drag myself out of bed just yet, though. Instead, I grab my phone and hit play on an audiobook that I’m an hour and a half from finishing. By the time the book is finished, the cat has left my stomach and I am free to sit up without putting myself at risk of getting scratched.

Writing starts slowly. I take short breaks to check in on a group chat with a few other writer friends. I know I won’t get much work done until the sun has set. I’ve never been good at writing during daylight hours. 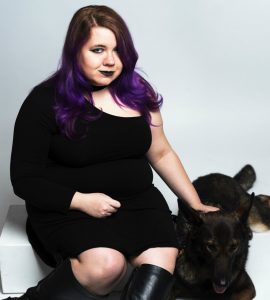 In the later afternoon, Mallorie uploads the photos from yesterday’s shoot. I’m taken aback by how genuinely happy and confident I look in the photos. In one of them, my smile is so wide that my eyes have practically disappeared. I post that picture all over social media.

Once it’s dark out, the writing speeds up. I force myself through the last few scenes of the book, and at 5am, I send it off to my editor. By now, she’s used to seeing ridiculous time stamps on my emails. The draft is a mess, but it’s something we can work with. And when I collapse onto the couch, my German Shepherd, Corey, crawls over to snuggle up next to me. I hug her like a teddy bear and we fall asleep.

I spend most of the day reading. Because I am legally blind, I tend to read things either on audio or as text-to-speech. Today, I’m doing the latter, and devouring an adorable young adult novel I’ll be discussing with my writing students the next day. It’s a day well spent, and it feels good to relax and step away from my own book.

Around 8pm, I log onto Skype and pull up Roll20. Time for a bit of tabletop role playing with my weekly crew. We’re playing Dragon Age, the tabletop version of my favorite videogame, in which I play an elven rogue with an attitude problem. Tonight, I’m attempting an Irish accent for the character. It’s not as bad as it could be, but not great either. I’ll have to practice.

After our game, I actually go to bed (in my actual bed! Not the couch!) by midnight.

I wake up by nine, but I stay in bed until noon, finishing up the book I started yesterday. My pets are thrilled that we are all in the real bed rather than on the couch, where the cats have to battle for who gets the best spot. The bed is big enough for the dog and both cats, so they are just fine to with sleeping in.

After I finish reading, I head to my computer and start prepping for my class. I teach writing classes, focusing on writing for children and teens. My current group of students is small and devoted and tight knit. Tonight’s our last class, and I’m feeling pretty bummed.

When I get to my classroom in midtown that evening, my dog (who is a guide dog) is overcome with excitement. I take off her harness so she isn’t working anymore and let her run around the front office, where my boss greets her with belly scratches and small pieces cheese.

At seven, my students arrive, and they surprise me with a little party. One student even made adorable desserts that look like the soot sprites from Spirited Away, a movie I’d had them watcher earlier in the term. We spend half the class discussing the young adult book I’d assigned and the other half we spend workshopping their writing. It’s a perfect final class.

The break is over.

My editor, who is ridiculously fast, has already finished her notes on my manuscript. We have a phone call scheduled for the morning, and we talk for nearly 4 hours. Half of that is discussing edits. The other half is just talking about our mutual obsession with true crime nonfiction and ‘90s music.

As soon as I’m off the phone, I start making a checklist of all the revisions I need to make. I’m under another tight deadline, and I know the best way to deal with it is a comprehensive list of everything I need to do. And…it’s a lot.

I take a break at night for another tabletop game. This time, I’m playing with a group of ladies, and we’re playing Monster of the Week, which is basically Supernatural or Buffy the Vampire Slayer in RPG form. This round, I’m playing a pink-haired goth girl. As a purple-haired goth girl myself, it’s not really a stretch. Though I’ve never killed a mythical monster with a hockey stick in real life so…there’s that.

Today, I am back to work on this book. First, title brainstorming. My publisher is not a fan of my working title, so I consult some writer friends for ideas. I make a long list and send them over to my editor. We’ll probably be hunting for the perfect title for a few weeks. Maybe months.

I dive into revisions for the rest of the day. During my breaks, I start brainstorming my next tattoo. I’ve been having the itch for something new for a while. I decide I want two tattoos, one of Persephone from Greek mythology and the other of Hel from Norse mythology. First, though, I need to finish this book because tattoos are not cheap.

Once again, it’s a weekend, and somehow I am dragging myself out of bed early. This time, it’s around eight. I’ve promised to meet my friend at a movie theater a little farther uptown for a matinee of Wonder Woman. It’s at one of those theaters with the comfy, reclining seats. My guide dog is particularly fond of this theater as it allows her to spread out while we watch the film. (She also just likes movie theaters in general because popcorn on the ground is fair game.)

We leave the theater raving about the movie. I think I’ve just added Gal Gadot to my celebrity crush list.

My friend and I find a cute little Indian restaurant nearby and decide to grab lunch. At first, the host wants to seat us outside. We request a table inside because it’s painfully hot out. At first, the host is hesitant, and it’s obvious he doesn’t know how to feel about me having a dog. I politely remind him that she’s a service dog and, legally, she is allowed inside. We’re seated a minute later, and by the end of the meal, both the host and our waiter are telling me how wonderful and well behaved my dog is.

My friend catches a bus, and I grab a cab home. I end up taking a nap on the couch, with my dog once again cuddling up next to me. I fall sleep knowing that, when I wake up, it’ll be time to get back to work. But for now, this feels like the perfect afternoon.

Oscar Wilde is Still Alive! The Best Books About Oscar Wilde
The Banal and the Profane: Phillip B. Williams
On Writing a Gay Political Thriller