‘Fetch: How a Bad Dog Brought Me Home’ by Nicole Georges

‘Fetch: How a Bad Dog Brought Me Home’ by Nicole Georges 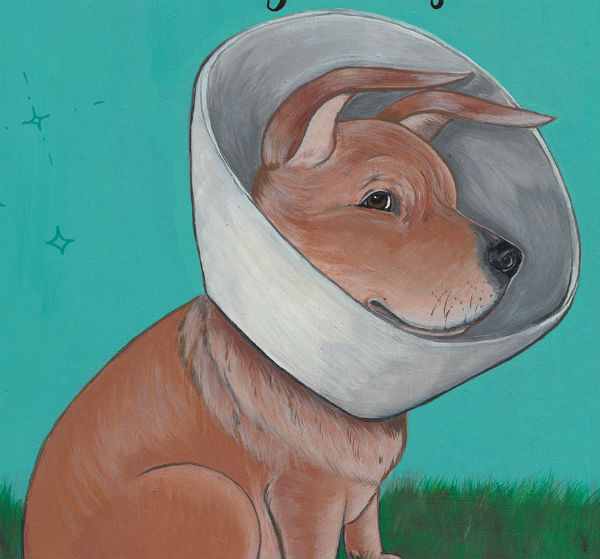 Nicole Georges’ second book is, like her first book Calling Doctor Laura, a graphic novel and memoir. But it’s also a love story, dedicated not to another human, but to her dog, Beija. Georges adopted Beija when she herself was only a sixteen, as a present for her boyfriend’s birthday. “Every dog manual will tell you not to pick the dog hiding in the back of the cage,” Georges writes. “A shy dog is more likely to bite and will often become a fearful, antisocial adult.”

But that’s the dog she adopts. Beija is a Shar Pei-Dachshund mix, which gives the pooch an extraordinarily large head, and ears that make her look like the flying nun.

It’s a match made for disaster: teen dog parents and a dog with many, many issues. Beija pees on the carpet, and unpredictably snaps at strangers, including dog lovers, children, and other animals. This makes it almost impossible for the teenaged Georges to find pet sitters, places to live, and dog activities that don’t lead to chaos. Repeatedly, Beija is dumped back into Georges’ lap, when her fed-up mom secretly puts Beija up for adoption (Georges re-adopts the mutt), and when Georges and Tom call it quits, leaving Georges as sole dog parent. Top that with life in a series of ever-changing punk houses, cohabitating with myriads of roommates, and you have a recipe for doggy disaster.

Georges tries everything she can think of to make Beija fit in, including crafting a Beija neckerchief that reads “Don’t Pet Me” and posting instructive fliers to strangers all over her neighborhood, which share tips on interacting with her irascible pup. Eventually, she finds comrades and girlfriends who sympathize with her and even befriend Beija, And when Beija needs cancer surgery, Georges discovers an even larger community of Beija fans willing to donate money for the dog they’ve grown to love through Georges’ perzine comic, Invincible Summer.

Despite all that, this isn’t a Dog-Whisperer tale. Beija remains her ornery self to the end. It’s Georges that changes, with the discovery of what her need to “fix” Beija says about her. As Georges matures, she realizes that her pet mirrors her own psychological make up: the product of both her own bad experiences as a child (including chaotic and undisciplined parenting role models from her parents) and her lack of knowledge as to how to “parent” her dog. Georges relates to Beija because they’re both abandoned beings. She yearns both to “fix” Beija, and for Beija to give her the unrequited love and loyalty and that she never got growing up.

In one of the most insightful parts of Fetch, Georges recalls all the animals she kept as a child, many of whom died, unfed and ignored in small cages or jars, because as a child she thought she was saving them, but at the same time she lacked the knowledge to know what care an animal needs.

I was giving them love, but I was giving them what I considered love. Just like my mother treating me to rodents and candy and endless summertimes, in lieu of doctors and elementary school. My care was doled out narcissistically, a dirty mirror that missed the mark on primary and basic comfort or structure

Georges’ comics work well with the story, their wide frames allowing enough space for the text so the story never seems cramped or text heavy. A few of these tales could have been cut or merged to make a tighter story; after reading multiple accounts of Beija’s ability to sour friendships and apartment living, readers get the drift. Then again, the meandering quality of the story parallels the lack of consistency that plagued both Beija and Georges’ lives.

In Fetch, Georges combines two reliable constants in her life: her skills for pet portraiture and her talent for writing memoir. Her passion for drawing animals merges with her insightful recollections to make this a touching, memorable dog tale bound to connect with animal lovers, graphic novel readers, memoir fans, and anyone intrigued with how pets and their owners reflect and sustain one another.