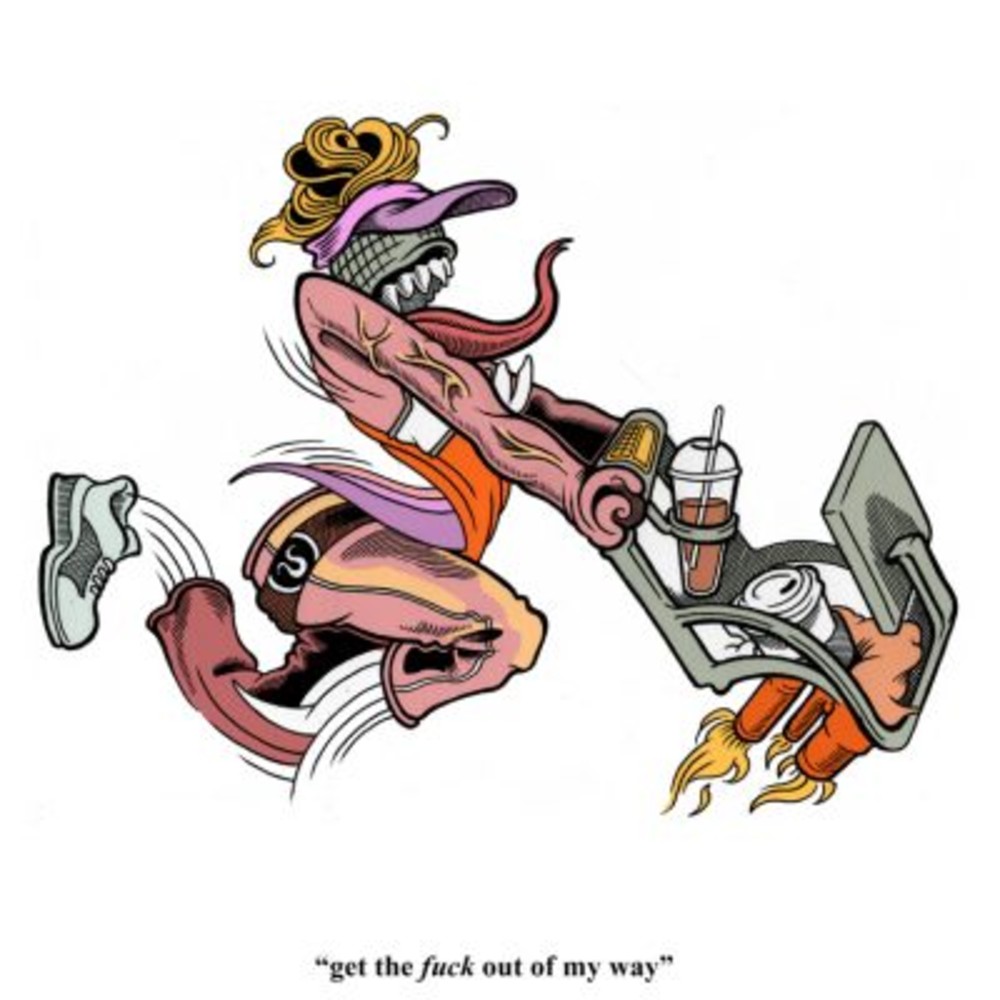 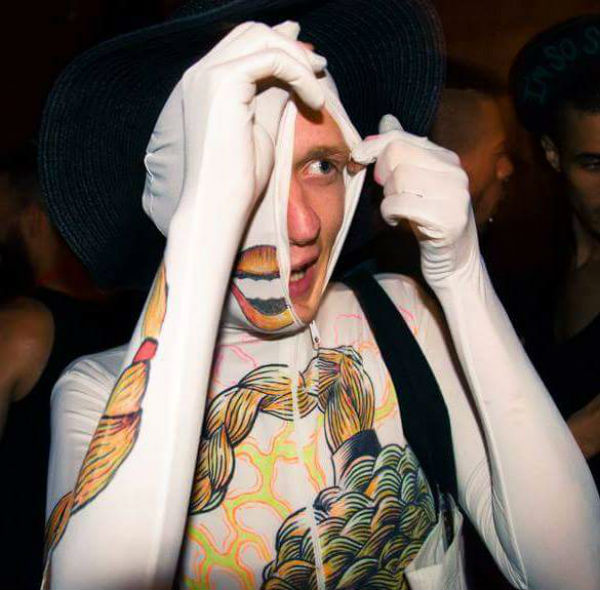 “We deserve joy and pleasure, and though there’s much hard work to be done, we have to make sure we’re still making space for those good feelings.”

His brilliant earlier works, Hungry Bottom Comics and Babybel Wax Bodysuit, caught my attention, and I was excited that this most recent book tackled something many of us are experiencing—the cultural homogenization of cities–with verve, queerness, and psychedelic panache. Eric was in the midst of traveling to comic book conventions and conferences this spring, but he graciously agreed to do this interview via email.

I first found out about you when I read Hungry Bottom Comics, but I don’t know much about how you began as a cartoonist. How did comics become your chosen form of artistic expression? 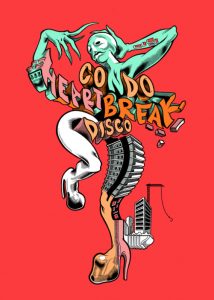 I actually started pretty young, like around eight or nine years old? I was always making little comic strips, and my parents, realizing I wouldn’t commit to any other extra-curricular activities, eventually put me in a weekend cartooning and animation class at the Ottawa School of Art. The instructor was this really amazing, irreverent cartoonist, Gerard Belec, who became something of a mentor to me. His class lasted just eight weeks or so, but I enrolled over and over again for years with a few other regulars. It was something I could always look forward to and escape into, and it got me through some tough years growing up. We made ongoing collaborative comics as a class, and the regulars and I would also sneak off and use the school’s photocopier to print our own comics.

When I moved to Toronto for university, I really shied away from comics. I came out as gay, became more social, and was doing a lot of the growing up I didn’t get to do as a closeted teen. I think I associated making comics with those more introverted years, and for a while, I wanted to shed that association–probably to feel “cool” and impress cute boys.

But over time, I didn’t end up feeling very at home in the gay community. Conventional masculinity had always felt like a shitty, oppressive spectre while growing up, something I could never live up to…and it was a bummer to see it manifest in toxic, shame-y ways in gay men, and throughout gay culture.

I wanted to take a step back and reflect on that, and my own experiences, and that’s how Hungry Bottom Comics started taking shape–first as a couple of satirical strips, then a longer, more thought-out narrative, and eventually as a trilogy. It felt really great to come back around to comics, not for escapism, but as a tool for reflection, analysis, and catharsis. Men, gay or straight, really aren’t socialized to process or talk stuff out, and the best autobio comics do just that, sometimes to an uncomfortable degree!

It felt a little scary, but ultimately necessary, to put that work out, and I was thrilled to have it greeted with a warm reception and resonate with readers in a lasting way.

Condo Heartbreak Disco is a longer work about the gentrification going on in Toronto. What inspired you to do this book, and how did you connect it with Koyama Press? 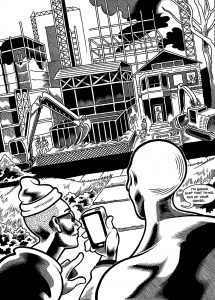 definitely the main inspiration! Though I haven’t lived in Toronto my whole life, I’ve been here long enough to see the city undergo a really startling transformation, from its mutating skyline to the closure of countless beloved cultural institutions, and the displacement of marginalized communities. Toronto doesn’t recognize its own cultural heritage in the way other big cities do, so developers have really been given a carte-blanche to tear shit down and shape the city towards their own narrow interests.

In the documentary Public Speaking, Fran Lebowitz said something along the lines of, ”it’s impossible for a city full of rich people to be interesting.” It’s a line that’s stuck with me, and it went on to inform the tone of Condo Heartbreak Disco. The book is simultaneously a snarky send-up of Toronto’s rapid dull-ification, a celebration of the people and places that have made the city weird and special, and an earnest, sombre reflection on “Where We’re At” more broadly in late capitalism.

I was originally going to self-publish the book like I’d done with Hungry Bottom Comics, but as I was posting some progress shots online, Anne Koyama reached out and expressed interest in publishing it. We’d met years ago through the Toronto Comic Arts Festival, and she kept an eye on my work ever since. I’ve been a fan of her press for a long time, and the wonderfully weird work they publish really helped motivate me to get back into making my own comics. So yeah, it’s been a real honour to be part of her roster this year. She has a real love for this city and its creative class, so I think the themes of the book really resonated with her.

Two of the main characters in Condo Heartbreak Disco, Komio and the Willendorf Braid (inspired by the Venus of Willendorf), act like some kinds of superheroes, goddesses, or demons.

What inspired you to create and incorporate these characters in a story about gentrification?

Komio and the Braid have shown up peripherally in my work for years as doodles, pinups, ethereal supporting characters. They’re irreverent, fabulous, heroic, and post-gender–my guardian angels, basically. To really convey the magnitude of what we’re up against in our current cultural moment, I wanted to put these characters in the thick of it, coming up against scary stroller moms, eviction threats, corporate greed, and the chilly Big City Disposition–and to have them stumble in the face of all that, despite their best efforts.

The story in Condo Heartbreak Disco represents an idealistic, transcendent queer spirit colliding harshly with reality, and I don’t think it’s a coincidence that I gravitated towards an idea like that in my mid-twenties. It’s a time where one has to reassess their dreams and grapple a bit more with the grind, and the harsher realities of life. You could say the Western liberal imagination is in its mid-twenties, too. There’s some soul-searching to be done!

Although this book is set in Toronto, readers in most cities will identify with the impending threat of gentrification. Do you have any suggestions of ways queers, artists, folks of color and others can fight back against these upscale changes?

Well, as tenants, we need to know our rights. As communities, we need to talk to one another, look out for one another, and to gather in physical spaces more often, where we can stay in the loop, and feel a sense of solidarity. We feel most powerless when we’re by ourselves, and the nature of present-day society encourages a certain navel-gazing solitude. I think that structure is deliberate. When we’re together, we stand a chance, and we realize we’re more powerful than we think in the face of corporate entities.

There’s a really inspiring ongoing protest in my neighbourhood against MetCap, a big property manager that’s been working to push out working-class tenants through shady tactics over the past couple years. Folks have been meeting weekly, organizing rent strikes, and it’s been steadily getting more attention in the media. It’s a movement I’d like to get more involved in. Having explored these issues in a comic, I feel a responsibility to take the next step and help out more practically in any way I can, rather than staying content in the Armchair Warrior state.

Although comics are two-dimensional, I know the 3D world of drag empowers and influences your art. Could you share how drag inspires you? 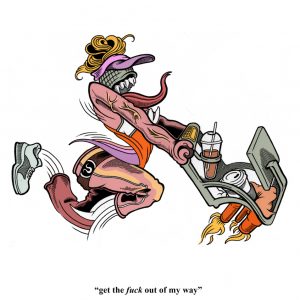 That’s a great question. Over the years, I’ve befriended a number of Toronto queens and have gone on to collaborate with a few, illustrating posters for their monthly events and including them as characters in my autobio comics.

I’ve always felt an admiration for drag queens and their craft, and a special kinship, too. There are parallels between drag and comics that a lot of folks don’t think about. Both are marginal art practices, generally considered “low-brow,” and from that outsider position, they both inhabit the archetype of the court jester, commenting on the world and satirizing its conventions by stepping out of the self and creating new identities.

Drag has also been a huge inspiration in terms of aesthetics. It’s made me appreciate fashion on a new level, and has opened me up to explore more experimental and extreme colour palettes in my work. Queens can really feel like comic characters come to life–they paint their faces in the same way I would draw a character’s face, from loose sketch, to final inks, to colours. If you have that parallel in mind, you’ll see drag throughout comics. Sailor Moon and the X-Men are performing drag in their own way…maybe that’s why I loved both franchises so much growing up!

I loved this book and am excited to read more of your work in the future. Any upcoming projects you’d like to share with readers? 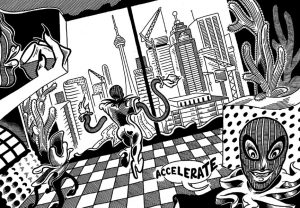 e two other new books that serve as “thematic sisters” and counterpoints to Condo Heartbreak Disco. This past fall, I released a collection of short stories from Retrofit Comics called Babybel Wax Bodysuit. The stories span several genres, from autobio, to creative non-fiction, to science-fiction, but they’re all linked to themes of self-commodification and identity…the tender scrumptiousness beneath our waxy surfaces.

I also have a comic out through Czap Books and Grindstone Comics’ Ley Lines series called How Does It Feel In My Arms?, which explores ideas and sensations of utopia through the music of Kylie Minogue. As I started working on it, the American election went down, and I wasn’t sure if I’d have it in me to make something cheery and escapist…it felt antithetical to the moment we were all enduring.

But working on the comic over the following months was actually really healing and taught me that there’s something vital and radical to thinking about positivity, and holding it close during these scary times. We deserve joy and pleasure, and though there’s much hard work to be done, we have to make sure we’re still making space for those good feelings…and showing those in power how good we are at feeling those good feelings!