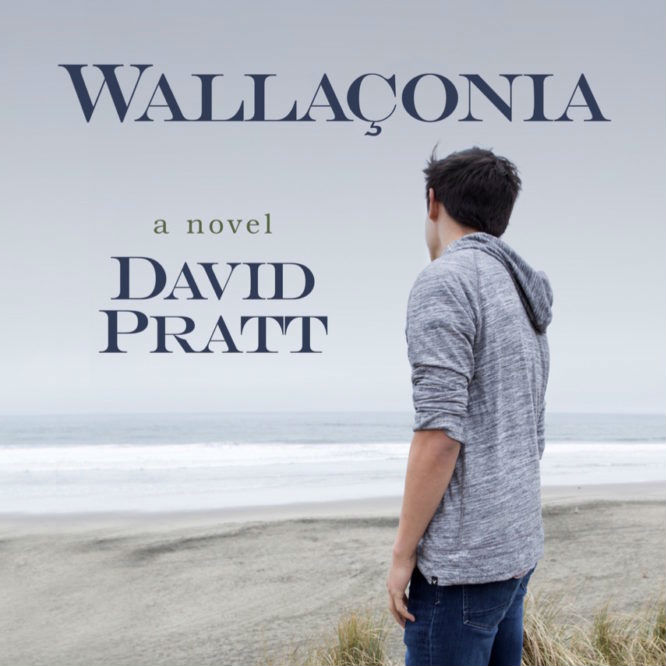 Wallaçonia? I asked myself, “How do you even pronounce that?” After some research (thank you Google), I discovered that the title of David Pratt’s latest novel contains a cedilla. This diacritical mark indicates a soft c, which is pronounced like an s. “Woll-uh-SO-nee-uh.” Wallaçonia. This is just one of Mr. Pratt’s lessons.

Wallaçonia unfolds mainly during a wintery off-season on Cape Cod. Among boarded up clam shacks, salt marshes, and souvenir shops, readers meet seventeen-year-old Jim Wallace. Pratt writes, “I have a one-sentence biography: I always wanted to be normal.” Jim is static, playing Uno with his overly sweet girlfriend, Liz, while attempting to be just the right guy. “I got okay grades,” Pratt writes, “and stayed out of trouble. But ‘proud of’ is when your son is a football hero. And/or has a girlfriend and has sex with her. Those guys…were the ones who put me down.” On the page, Jim reeks of angst. This angst, though, is incredibly authentic in a manner that doesn’t repel or annoy readers. In fact, it draws them further into Wallaçonia. Jim almost scolds himself for his introspection, saying, “Why do I have to do so much thinking?”

As virginity and family drama loom, Jim accepts a job at Pat Baxter’s bookstore. Pat is single, gay, and the topic of his father’s one-liners. Slowly, Jim learns about the first homosexual adult he has ever encountered. Pat sips coffee and enjoys books. He bakes date bars. Pat is pretty normal…even though, according to traditional social standards, he is different.

One day, a new employee arrives at the bookstore. A handsome boy named Nate. Little Nate Flederbaum was the chubby tag-a-long that Jim ridiculed and, perhaps, even tortured in middle school. Once, Jim thought, “At least I’m not like him.” But now Nate is the boy Jim has been in search of.

Keenly and precisely, Pratt depicts the voyage of a boy who wins his own sense of manhood. With Wallaçonia, readers are treated to a wonderfully written, original coming-of-age tale. Jim isn’t merely coming out of the closet. Jim is becoming…Jim.

Wallaçonia reminds readers that, sometimes, it’s okay to not know where you’re going. In one scene, while attempting to locate a café, Jim peers down at his GPS. Pratt writes, “That blue dot was funny. It had a little triangle pointer on it that was supposed to show the direction I was going. But mostly the pointer went around and around, clueless where to go.” Pratt’s hero may not know where he’s headed, but his journey is certainly fascinating.