‘One Man Show: The Life and Art of Bernard Perlin’ by Michael Schreiber

‘One Man Show: The Life and Art of Bernard Perlin’ by Michael Schreiber 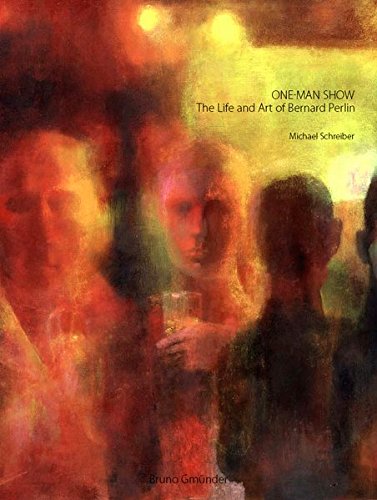 Authors can make tombstones out of biographies, reducing lives to deadly dull tomes of names, dates and stereotyped sentiments. Not so Michael Schreiber in his vivid and compelling book, One-Man Show: The Life and Art of Bernard Perlin. Never heard of him? You may not realize it, but it’s likely you may have caught glimpses of him in biographies of other gay luminaries of the 20th century: Perlin knew everybody. But even if you’ve never encountered him before, you’ll never forget him after reading this remarkable book.

Perlin was born in Richmond, Virginia, in 1918 to Russian Jewish parents. His drawing skills brought him to the attention of art teachers in New York, and his physical beauty caught the eye of many famous, infamous, and anonymous men. He studied in Europe before World War II, and when war broke out, he admitted his homosexuality and was disqualified for the military. Then, quite ironically, he worked as a war correspondent and propagandist, creating iconic posters of virile soldiers flexing their muscles to defeat the enemy.

In occupied Greece, he survived violence and a traumatic event that, once worked out on canvas, triggered his growth and evolution into a mature artist. Beauty in the natural world, and in the men he loved and who loved him comprised his main subjects; he rebuffed the seduction of Abstract Expressionism and Pop Art in the 1950s and 60s, and so lost favor with the art scene. Following endless, tumultuous affairs and relationships–his patrons, lovers, and enemies were men and women of power and eminence–he married Edward Newell a few years before his death in 2014 in Connecticut.

Those are the bare bones of his story–but, oh, the flesh. (There was a lot of it apparently – as much in his life as on canvas.) The list of his friends includes Tennessee Williams, Paul Cadmus, George Platt Lynes, Glenway Wescott, Lincoln Kirsten, Truman Capote, and countless others. Reading the details of who did what to whom and who had a big one and whose was tiny, sounds like bar gossip, but the astonishing thing is that the narrative, an extended conversation between the author and his subject, rarely sinks to that.

Like Perlin’s paintings, often described as magic realism, this book magically endows most of its recalled events with a shimmer of life’s beauty, silliness, tragedy, and evanescence. Schreiber presents a seamless Q and A, or call and response, almost inventing a new art form in the process. Schreiber minimizes his own presence, allowing Perlin to speak of Perlin, sometimes disingenuously, mostly frankly, occasionally ruefully–an unrepentant old roué looking back on his spendthrift youth. He is rarely repetitious (no doubt the result of careful editing) and almost always engaging. A lost and glorious world is summoned in the natural ebb and flow of conversation; like his art, the tiny details in the background are as vividly rendered as the subjects in the foreground. The magic of Schreiber’s pen matches that of Perlin’s brush.

The book is for the most part well produced. Some text may be small and hard to read, but the illustrations are sumptuous and generous in number; they and the narrative “converse” back and forth with each other, as Schreiber and Perlin did for years. One wonders who was luckier–the author to lose, and find, himself in such a fascinating subject, or maybe Perlin to find a devotee willing to track down art, and offer him his final one-man show, a retrospective of his whole life. But perhaps we the readers are the luckiest ones of all, for One- Man Show: The Life and Art of Bernard Perlin is a show-stopping accomplishment.