‘Not One Day’ by Anne Garréta

‘Not One Day’ by Anne Garréta 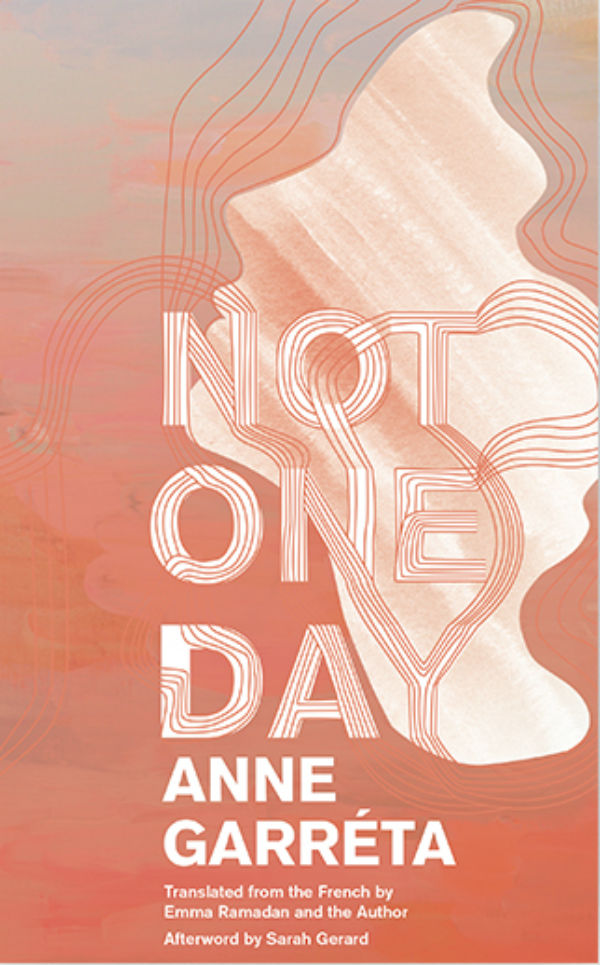 “What’s to be done with our inclinations?” asks Anne Garréta in the first sentence of her newest book, Not One Day. The text that ensues is an exploration and interrogation of her desires, as Garréta intends to type an unedited account of past romantic encounters for five hours a day over the course of a month. Although the book swerves briefly into the erotic, the majority of the text is a heady meditation. Where we expect to find a confession of the body, we are in fact met with a confession of the mind, as Garréta laments the imposition of hetero normative gender roles upon queer desire. This leaves the reader with another question: how can we invent alternate ways to express desire outside of hetero dichotomy?

Not One Day is just as slim as Garréta’s Sphinx, a genderless love story nominated for the 2016 PEN Translation Prize. In keeping with the Oulipo tradition, both works are marked by restraint. Where Sphinx masterfully sidesteps gender pronouns, Garréta now sets parameters for her writing process. In the Ante Scriptum she informs the reader of a rather clinical set of boundaries, describing herself as “the archivist” of her desires, putting them down “neutrally. “Garréta sets herself up to become immersed and subsequently forced to move on with a new fixation each day. It’s a calculated, punishing way of approaching the topic of longing and it’s fulfillment. Garréta’s parameters ironically bar her from constraint, as she writes mechanically, without looking back or editing her work. Garréta describes this process as painful, as she admits in the Post Scriptum that she did not ultimately follow her initial regulations, saying, “what should have been a month’s work was disseminated over more than a year.” The end result is 12 vignettes, each headed by a letter and asterisk to signify the anonymous subject. Despite her earnest attempts at intellectualization, desire is too unruly to be neatly categorized.

Much Garréta’s discomfort stems from her distain for pre-prescribed gender norms. This discomfort peaks in Garréta’s vignette about E*, who she meets at a conference.  E* embodies the traditional femme role and assumes the more masculine presenting Garréta will adopt the role of male pursuer. While traversing the hotel to arrive at E*s room in middle of night, instead of reveling in the imminent fulfillment of her desire, Garréta reflects that, “it’s all so strange and familiar, and a bit tiring, to play this game; to play it again and always according to the standard though implicit rules leaves so little to surprise. Who dare to invent others? To thwart.” Garréta goes on to say that she feels like a “willing character,” playing in a tired, clichéd film.

The notion of desire as an act reemerges in vignette about H*, a trans woman who Garréta meets while DJing at a club. When Garréta invites H* up to the DJ booth, the reader is primed for another scene ripe with romantic intrigue. Instead Garréta focuses on the ways in which their flirtation has been scripted to follow gender norms. Garréta refers to H* as a “femme fatale” character, and Garréta’s “stage directions would indicate something like: the hero (gentleman, thug, or young Professor Unrat) lights the heroine’s cigarette.” Garréta continues to refer to their exchange as an act as she remixes tracks that include “the phrases of old dramas, old romantic comedies.” The reader senses her boredom and detachment. Although their gender presentation is non-normative, they find themselves enacting standard tropes.

Garréta relishes a queer exchange of desire that is “outside the law of normative codes and public languages. ” She takes pleasure in her exchange with D* at a party, as their glances are imperceptible to the “mere heterosexuals” whose desire is “radically disenchanted.” Although they are at a party, they are free from stifling norms. They are free to explore the “radical unknown of desire, the art of its emergence,” as opposed to abiding by “some elementary equations and codified protocols.” There is liberation in not being held to normative standards of interaction.

In the books conclusion, Garréta reveals that one vignette is fiction, despite her initial promise of non-fiction. The final catch? She will not tell us which section is the fiction! The reader is left to wonder: which vignette is the outlier?Does it matter? Garréta’s desire for queer love outside of hetero social norms aligns with the ultimate philosophy behind the creation of her book. Not One Day refuses to follow the rules it’s been assigned. Just as Garréta revels in “the situations of secrecy homosexuality may involve,” she gleefully obscures the mechanics of her own creation.