‘how to get over’ by t’ai freedom ford

‘how to get over’ by t’ai freedom ford 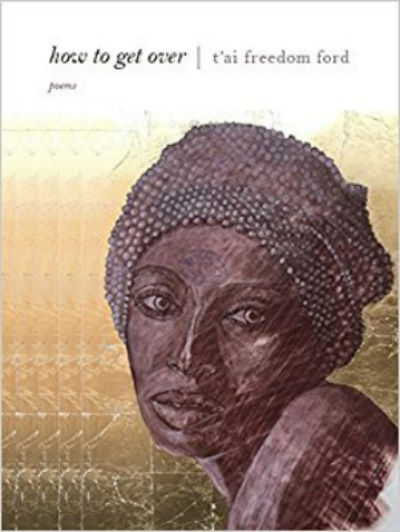 It’s hard to contain or define the scope of t’ai freedom ford’s impressive debut poetry collection, how to get over. It’s an ambitious collection in conversation with everything from Keats to Kanye, from history to heartache, always bold and tender in the attention it pays to its subjects. Divided into four sections (live / lie / love / die), ford’s evocative poems traverse time, gender, ancestry, and love. Each slender poem cuts with precision, packing a tremendous amount of power into a slim volume.

From the first poem, it’s apparent that ford can manipulate language so that it tells two stories: the narrative of the words, and the sound of the words. These are poems not meant to stay static on the page. Her language creates its own urgency, its own momentum. In “past life portrait machete, circa 1791” she describes “a staccato thwack clacking stalks of cane sugar.” There’s a music to her vowels, found in evocative lines like “already rust in the mouth of a newborn” in “namesake.”

While these gems of language alone are extraordinary, ford has created a deliberate structure, with poems that echo against each other, building a world within the book. The title poem, “how to get over”, is actually a series of poems, some specific in their dedications, spread throughout the collection. Each is its own hymn, a mix of wisdom and warning. The first casts a spell of rhythm, each word looped to the next: “screw off your mouth and sit there bottle still. / know what it like to feel fragile.” In others, she is as playful as she is sincere, as in “How To Get Over; For those of us who can’t quite quit her:” “if the poem follows / you home, whiskey / pickling her tongue, / make her coffee, black.”

It would be impossible to separate out the poems that celebrate blackness, as every poem embodies a pride and history. There are poems that twist with aching sadness, as in the sparse dictionary created in “wilding,” for the Central Park Five or “ode to an African urn,” where questions about the death of Trayvon Martin and others are in conversation with Keats’ lines. The collection ricochets from meditations on ancestry to pop culture references, with never a line or sentiment out of place.

By far, though, some of the most memorable poems are rooted in the sensual. “Rock. and roll” is an unstoppable portrait of sex and the blues (“When we fuck, clavicles become drumsticks”). In “How To Get Over: for Kardin Ulysse” beauty is found in a gait: “Your walk is a beautiful / threat. Bomb. lit fuse strut. / a live wire spitting spark.” There’s a portrait of young ford as a budding queer woman in “lucky number 7 (or indications that i’d be a lesbian.)” Each poem has its own generosity, its own spirit. Together it forms a collection that’s as bold as it is gentle.

'If Jesus Were Gay' by Emanuel Xavier
‘Love, In Theory’ by E.J. Levy
'Lesbian Decadence: Representations in Art and Literature in Fin-De-Siecle France' by Nicole G. Albe...