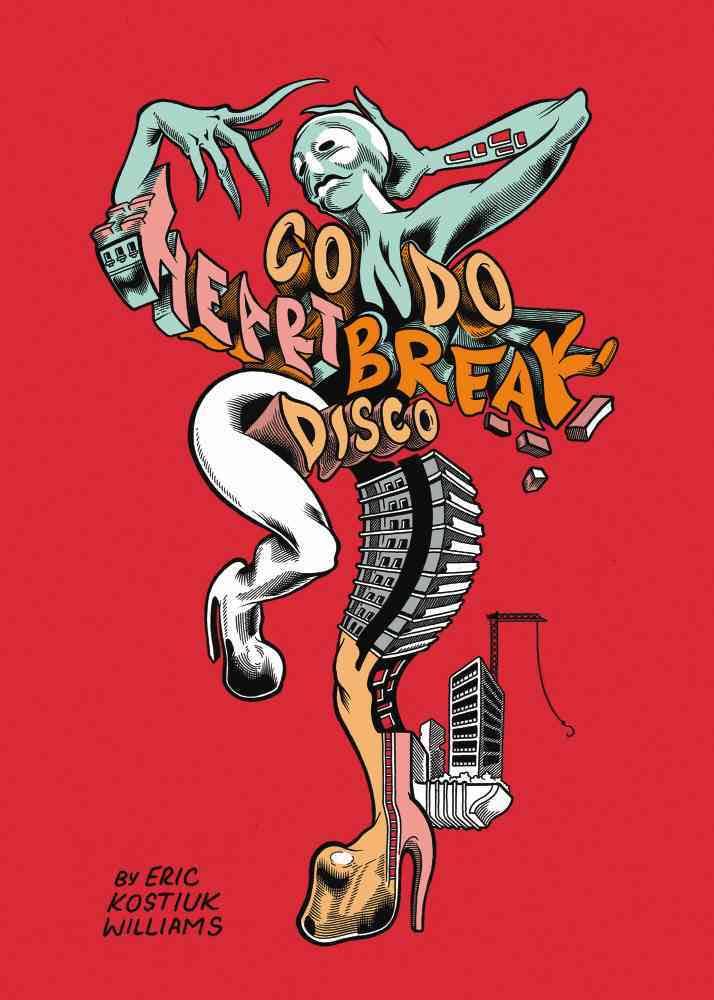 If you live in any big city–San Francisco, Oakland, L.A., New York, Vancouver, Seattle, Portland–there’s a good chance your neighborhood is being gentrified. All over the U.S. and Canada, especially on the coasts, rents are quadrupling and cheap living spaces, neighborhoods, and art scenes are being razed in favor of expensive condos and apartments.

Eric Kostiuk Williams’ Condo Heartbreak Disco is a comic about gentrification in Toronto, Canada, but it rings true for any gentrified city. Our guides, and surreal protagonists, are two goddesses/superheroes/demons: Komi, a genderfluid shapeshifter (in the way that Plastic Man shifts shapes), and the Willendorf Braid, a twenty-first century rendition of the Venus of Willendorf. At times both helpful and horrible, these apparitions guide us through the comic like Dickens’ ghosts of Christmas, past, present and future, showing us what this upscale new corporate world hath wrought.

The symptoms of gentrification surround them. A yupster pushes a baby carriage, but the baby is an oversized non-fat, half-caff latte, tucked into an expensive double stroller. Komio speculates: “I wonder sometimes if stroller-parents are modern day soldiers of fascist futuristic ideals. As the Father of Futurism once said: Time and space died yesterday. We affirm that the beauty of the world has been enriched by a new form of beauty. The beauty of speed.”

Next Komio spots a young photographer. “His shtick seems to involve taking street-style shots” of neighborhood folk. The photographer’s work blows up online, where it is discovered by real estate developers, who map his street art to locate future spots of new developments.

It gets worse. The two superheroes pal up with an activist, only to learn that the three of them are being evicted, to make way for a new housing development. Ugly high-rise “Art Condos” mock longtime residents with names commemorating the very artists they displace: “They wield the especially sadistic power of paving right over memory itself.” Some folks sell out, some fight back, but it’s hard to stop something that completely reconstructs landscape and living space.

The ultimate tragedy is that many of these buildings are purposely built to remain empty—they are simply investments, meant to keep up prices. Williams comments, “The media refers to them as ghost cities. Over a hundred of them, built in quick succession, with hardly anyone taking up residence….the dystopic conclusion of development for its own sake.”

Williams’ surrealist line art curves and meanders like psychedelic paisley, reflecting the true absurdity of the capitalist transformation of our cities. The morphing of his story and art capture how our cities seem to change before our eyes, without our input. This is truly a tale of our times, queer in its activist view, and crucial in its critique of how our landscape shapes us.

'The Prince and the Dressmaker' by Jen Wang
'Three' ed. by Robert Kirby
'Queer and Trans Artists of Color: Stories of Some of Our Lives' by Nia King