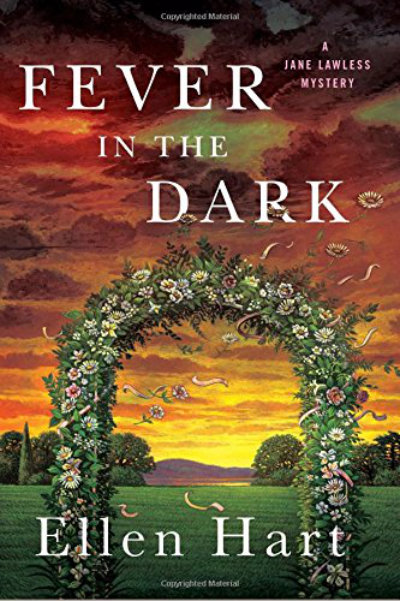 To review an Ellen Hart mystery seems beside the point. Hart, best known for her Jane Lawless series, has been writing lesbian crime fiction for almost thirty years and recently was named the 2017 Grand Master by the Mystery Writers of America (MWA), which is a big deal, a really big deal. She’s the first out LGBT writer to win the Grand Master status. She’s written 32 novels, and won the Lambda Literary Award for Best Lesbian Mystery six times, the Minnesota Book Award for Best Popular Fiction four times, and the Golden Crown Literary Award for mystery three times. Needless to say, she knows how to write a damn good mystery, and Fever in the Dark is no exception.

The story begins soon after the Supreme Court legalized gay marriage. A newly married lesbian couple, Annie and Fiona, have wedding proposal video that a well-intentioned friend posts on YouTube. The video goes viral and brings about unwanted public attention, and before long, Annie’s estranged family arrives on their doorstep, bringing with them a secret that takes the reunion to a much darker place and eventually to murder. Jane Lawless, amid struggles with managing her restaurant and defining her relationship with her former love-interest Julia, takes on the case.

Despite a few intriguing subplots—a bomb scare, a love-smitten stalker, and the unnerving experience of being thrust into the public eye—the core mystery holds, as it should, the most fascination, particularly because of a pivotal event in Annie’s past—which I won’t reveal here—that’s deeply troubling. In general, she doesn’t linger too long on the intricacies and paradoxes of emotional turmoil; she knows she’s not writing that kind of novel. Her cast of characters—such as the flamboyant and unflappable Cordelia, a mainstay in the series, or the indulgent and delusional Mimi Chandler who seems to relish her diagnosis as a bipolar narcissist—often cue to the reader that we’re not dealing with the complexities of real people, but rather fictional, at times larger-than-life characters and circumstances, crafted to entertain, not necessarily elucidate psychological subtleties.

But don’t be fooled by her boldly drawn (and fun to read!) characters or her well-paced storyline, Hart has something very serious on her mind. By Fever’s conclusion, she has touched on sexual violence and the devastation it causes, the depilating effects of Alzheimer’s, and the loss of privacy in the information age, where it seems, because of the legalization of gay marriage, a personal moment made public can be anointed with greater meaning than intended—and can draw confusing and even dangerous attention. Together these issues suggest a common concern about the dehumanization of women, LGBT people, and the elderly, whether it’s through sexual predation, social media, or disease. By way of a twisty mystery plot, Hart is reminding us that we should be keenly aware of the dehumanization in the world around us—and those responsible for it.

'Under The Udala Trees' by Chinelo Okparanta
'Travels with Casey' by Benoit Denizet-Lewis
'Gay is Good: The Life and Letters of Gay Rights Pioneer Franklin Kameny' Edited by Michael G. Long