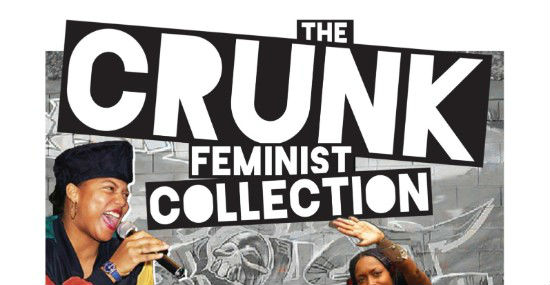 “Crunk feminism is the animating principle of our collective work together and derives from our commitment to feminist principles and politics and also from our unapologetic embrace of those new cultural resources, which provide or offer the potential for resistance.” The Crunk Feminist Collective, or CFC, in both title and in this collection of essays creates a prolific multi-layered space that exists as a guidebook for survival, methodology, and conversation. Much like a good mix-tape, the book has an intro, outro, and different layers of based sound in the activist, scholar, feminist, women of color, media representation, sisterhood, trans, queer and questioning landscape. The language in the book is based in brevity, a collection of blog posts from 2010 to 2015. Each smaller post, no more than 1-4 pages and written with enough white space to intimately engage with the language and dovetail into the next post, leaving the reader equipped to ingest more strategies for resistance. Each post interwoven into—ten larger themed sections providing homage, brutal honesty, much needed critique, and accounts based in personal experience.

Today the CFC is made up of 8 members who inhabit different socio-political and cultural spaces and more importantly exist in different spheres as hip hop generation feminist. Originally created in 2004 the Crunk Feminist Collective was originally the brainchild and safe space of grad students Brittney C. Cooper aka Crunktastic, and Susana M. Morris aka Crunkadelic. On March 1st 2010 the collective was revised in blog form to continue unpacking the narratives of the hip hop feminist generation and today they have an audience of over 1 million readers and sometimes haters. A framework whose necessary bricks include writers like Gwendolyn D. Pough, Joan Morgan. When I read a text like this one, I ask myself, could I give this book to my mother or other people in my life who may not understand feminism but can relate to the concepts outlined in the book? After all, the book’s dedication page reads “for our mamas, our homegirls, and each other.”

In Does This Make Me Look Latina, Crunkista outlines a framework for helping black and brown women understand the world they will face after graduation. Advice lesson #10 should have been plastered on my wall after finishing my MFA—“Work should NEVER be your life, Make your physical, emotional, and mental health a priority. No one else will do this for you.” Throughout the text we find this types of list and tools for resistance, starting with ourselves through the systems of patriarchy or gender performance. “Many of us found feminism after recognizing and/or resisting the blatantly sexist and misogynistic cultural expectations of how we were supposed to think, act, dress, and behave.”

One of the pieces that I shared with one of my homegirls, “When Everything Hurts: Black Pain, Silence, and Suicide Tries,” Boylorn writes: “We matter but we are not present enough forced, always to think, ahead and defend ourselves to think back and protect ourselves, we are not always strong.” Boylorn openly revisits the rough and scary road of undiagnosed but visible depression and emotional ache while reminding us all the “Superwoman” method of thinking is dangerous, unrealistic, and only causes self-destruction. And when we keep quiet about our pain, we continue to struggle in public and private spaces.

When I think of feminism I am always questioning whether enough women of color are involved in the conversation. And when I think about being a womanist I worry queer and trans voices are underrepresented. In the Crunk Feminist Collective universe both juxtapositions are situated on the road to understanding each other. The eight writers all take a powerful and complex approach to talking through their experiences ranging from media representations including respectfully checking our elders i.e. bells hooks, revisiting the Tyler Perry universe, Beyoncé as a Feminist, the Black Lives Matter movement, white allies, how to recover when you’ve inexplicably said the wrong thing in the company of folks doing the same cultural/political work, dating a Ph.D., the role of gender and sexuality, reproductive rights, the third world gaze, emotional and sexual abuse. The book begins at patriarchy and ends with self-care…for me, a roadmap to climbing out of the patriarchal system and back into our own communities, voices, politics, identities, and choices. I enjoyed the book and hope they consider creating this volume again with even more writers. I want to share this book in classrooms, among friends, homegirls, family, and read it over and over to myself when I feel lonely, misrepresented, and voiceless.