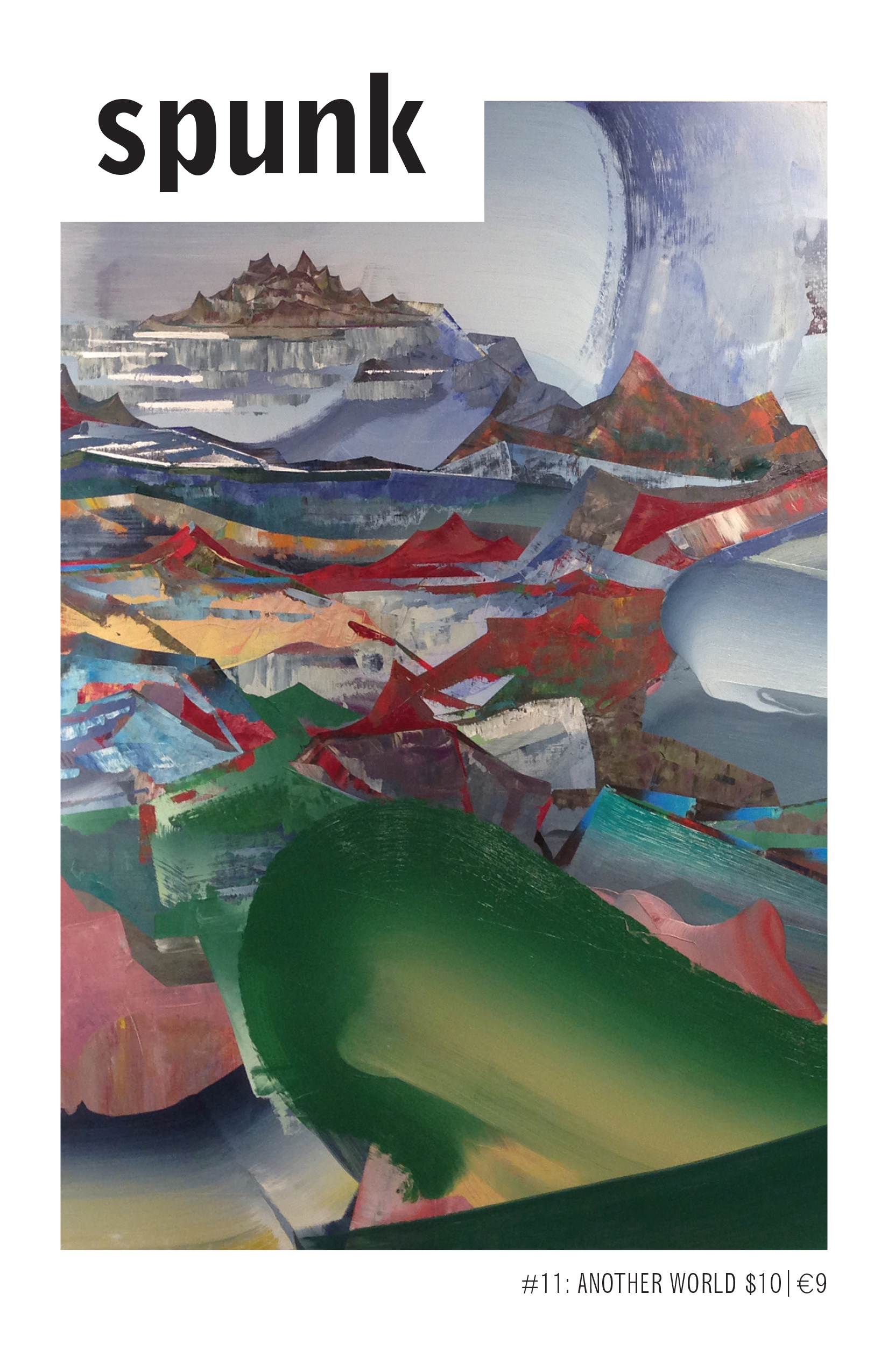 1. pluck; spirit; mettle; determination; heart: the courage to carry on

Spunk [arts] Magazine, founded in New York City in 2003, is an art journal specializing in original artwork and memoir-style writing. This past winter, Spunk released their eleventh issue.

On my first and only trip to Germany, Lufthansa, or the JFK baggage handlers, destroyed my one chance of romantic happiness or at least sexual gratification with the most beautiful bellhop I had ever encountered (until a trip to Rio, in which my designs were thwarted simply by my lack of Portuguese and his lack of interest). I was traveling to Frankfurt with my boss at the time, the CEO of a small consulting firm. She was a compulsive over-packer. There was always more than she could ever wear, read, or need, stuffed into her enormous suitcase. But this level of preparation makes no difference when your luggage doesn’t make it onto the plane. How they “lost” this massive trunk of a bag, I will never know. She was convinced that they wanted the early-career David Yurman jewelry she had “hidden” in the bag. I suspected they just gave up trying to throw it onto the plane.

Her travel clothes were fine for the client meeting we had when we arrived at the hotel. But because she had filled her carry-on with work, instead of an emergency change of clothes, she didn’t have anything to wear for the next several days. There wouldn’t be any time to shop for new clothes, because the conference would last for 10-12 hours each day, and then there would be hours of work before and after crafting documents for the next day. I would be lucky to get four hours of sleep each night. Facing this crisis (and trusting my taste, I guess), she decided that she didn’t need me for the client meeting after all. And that was how, with a German vocabulary of fewer than a dozen words, I found myself roaming the unfamiliar streets of Frankfurt in search of some tasteful ladies’ business attire and some purely functional panties.

If I was going to be excused for being inessential, it would have been nice to spend that time in my room, maybe to sleep, maybe even to do something more exciting. This job didn’t leave much time for a romantic life, or even just a sex life. Even when we weren’t traveling, we worked 12-hour days, and when deadlines loomed, which was almost all the time, we worked through the weekend, too, either from home or at my boss’s apartment, endlessly editing documents.

Whenever we traveled, I couldn’t help but read every promising interaction with a hotel employee through an especially libidinal lens. Within minutes of arriving at the hotel, I was in love with a bellhop. He was lithe, clear-skinned, and cheery; I took his confidence to mean that he knew how to get things done, all kinds of things. Maybe it was just a politeness and affability I was not accustomed to in New York, but as he carried my bags, the handful of words we exchanged convinced me that he knew enough English to understand innuendo. What more would I have to do when I got back but ask when his shift ended, remind him of my room number, and wait? I was jetlagged and hungry—and also 26 and undersexed. This was the extent of my strategic ability.

Thanks to all the traveling I did for this job, I was an expert at fantasizing about hotel staff. These were the days before Grindr, or even Manhunt or Craigslist. If you wanted to pick somebody up in a hotel, you had to leave your room and try. In an unfamiliar city where I didn’t speak the language, the best I could do would be the hotel bar, and I wasn’t interested then in a closeted business traveler twice my age. Never in all of my business travels had a bellhop fantasy come to anything. I’ll never forgive myself for failing to take a chance on one at the Mandarin in Rio De Janeiro. He’s the one that got away. They all were, but he and I would have had the beach.

But now I had to go buy a business suit and a blouse and some suitable (please, God, not too sexy) panties. And if I wanted some down time even to wink at that bellhop, I’d have to shop like I’d never shopped before. I didn’t mind shopping for her. We’d gone shopping together before, and it was a little flattering that she trusted my taste, even if it was only by necessity. Admittedly, there was something a little The Devil Wears Prada about our relationship. What made it more bearable were not just the occasional bonuses, gifts, and travel perks but the fact that she seemed to have decent values. Like the marijuana she freely offered whenever we worked at her apartment, her 60s radicalism never really left her. For as long as I could, I rationalized that I was helping to revolutionize corporate America from within, empowering workers to have more control over their work lives—all while I was at the mercy of one woman’s perfectionism, compulsive work habits, and poor packing decisions.

I walked to a high-end shopping district not far from our hotel, and tried the first boutique I saw. The saleswoman was at my side as soon as I walked in. The first thing I said was, “English?”

“Yes, of course,” she replied, in a clipped but sweet way.

I explained what had happened and that I needed to buy just one suit and blouse. Right after walking in, I’d spotted an understated light brown worsted jacket that was conservative enough for meetings with bankers but also, with its cute piping around the lapels, at least a little interesting. My boss had written down both her American and European sizes, and they had one in her size.

I picked out a cream-colored silk, sleeveless blouse to go with it. But when I had no idea what her blouse size was, the saleswoman asked, “How big is she, here?” And she put her hands under her breasts as if she were about to weigh them. This was not my area of expertise. I had no idea whether my boss spilled out of a v-neck or didn’t even need a bra.

I couldn’t tell whether they sold underwear. If they did, it was probably tucked away in a drawer somewhere, tinier and lacier than anything I wanted to imagine my boss wearing. The concierge had told me that I could find “basic needs” at a store that sounded like their version of Walmart. It was farther away, but I didn’t have much choice. Every step took me away from the chance to make a memory in the Frankfurt Hilton. The streets got decidedly less tidy as I walked, but before too long I happened across a very small shop that seemed to be full of underclothes of all kinds.

It was like a Claire’s Boutique in a mall that was about to be demolished. Everything was bright but a little dirty—more glaring than cheery, and dingy around every edge. The stern, ruddy-faced woman behind the counter actively ignored me. “English?” Nothing. “Hello. English?” Nothing.

“I need to buy underwear. For a lady.”

She finally looked up at me, and I pantomimed putting on underwear and traced panty lines across my groin. “For a Frau. For Fraulein. Panties.”

She just shook her head, either because she didn’t understand or because she had no interest in selling a Fraulein’s panties to a young American man of unknown intentions, suspect just for wanting them at all.

She looked down at my shopping bag from the boutique and then back at me, this time with a look of contempt on her face. She gestured toward a plastic barrel in the back of the room. It looked like it belonged on a beach, full of half-melted ice and a warming keg of beer. But it was full—thank God—of underwear. Cheap, flimsy, cotton underwear of blessedly-modest cut. I bought three pairs and walked back to the hotel as fast as I could, proud that I had overcome a language barrier and a cultural barrier. I’d just made it a little more common, in her world, for a man to buy himself (as far as she knew) some ladies’ unmentionables.

The meeting was over by the time I got back. And it wouldn’t have made any difference. My bellhop was gone—whether for the day, or just for lunch, it didn’t matter. I never saw him again, and the next 100 hours or so would leave no room for him, anyway.

My boss loved the suit. But when I met her in her room for our usual 5 a.m. pre-meeting meeting, I discovered that the underwear wasn’t a hit.

“There was something wrong with that underwear you bought,” she said. “I just couldn’t make it fit. I put it on one way and another way, inside and out, and I couldn’t make them fit.”

“That was when I realized the problem: There was room,” she said, “for a dick.”

All I could think was, Lucky you.

To buy the latest issue of Spunk click here,