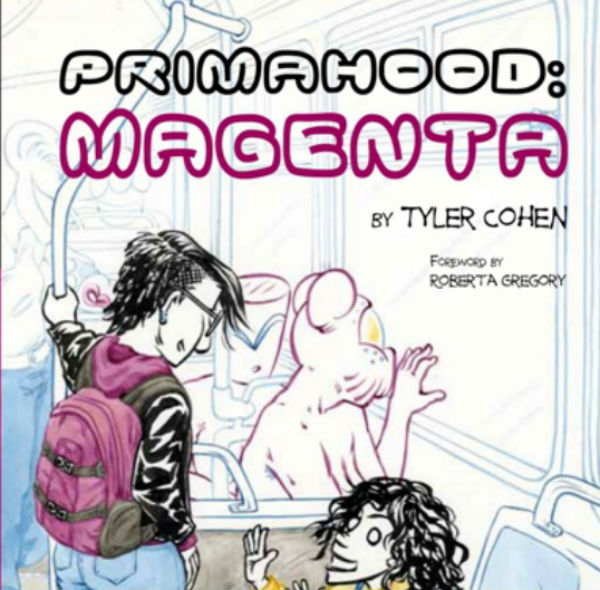 With a boost from Kickstarter, Tyler Cohen has compiled both her surrealistic watercolor drawings of creatures called Primazons, and her “Mamma Pants” comics about raising her daughter Nene, from birth to the puberty. Cohen’s dedication is telling: “This book is dedicated to all parents who once called people with children ‘breeders.’” In other words, becoming a parent guarantees you will live to eat your words.

Cohen tackles the innate struggles of parenthood as well as the challenges of trying to raise a humanist child in a constantly changing capitalist, racist, sexist society (and this was before Trump got elected):

Back before the tech rush change the population of San Francisco, and before I ever thought I wanted a child, I thought that city of queerdos and arty adventurers would be a great place to raise a girl-child [her art shows arty queerdos]. But now…[the street scene has changed, populated by upscale techie women].

Nene, a biracial child, and Cohen, a bisexual mom, make up an alternative family that circumvents a lot of the pitfalls of nuclear family life, with their frank discussions of racism, gender, sexuality and class. But Cohen still struggles with thwarting the extreme power princesses, peer pressure, and pop music wield over her daughter. Readers feel Cohen’s pain when Nene gleefully chants all the words to Carly Rae Jepson’s Call Me Maybe by heart.

The book ends right as Nene approaches menarche, bra-buying, and the tribulations of being a teen, leaving readers wondering if she’ll grow up appreciating her mom’s lifestyle or rebel against Cohen’s beliefs.

Sketches of Primazons are interspersed between the comics. Primazons are creatures with adult women’s bodies and faces replaced by tribal masks, surreal gasmasks, or helmet-type heads. Many are accompanied by smaller, childlike Primazons. They prepare potlucks, play in the park, converse on the porch, and hang out on the street. These fanciful drawings are Cohen’s sketches merged with her subconscious, the communities she simultaneously experiences and wishes to exist.

Parents of all kinds will enjoy Cohen’s musings on child rearing, and nontraditional families will especially appreciate finding themselves represented in these feminist comics, which honor a mom who wears pants and celebrate what it means to be a girl growing up in America.