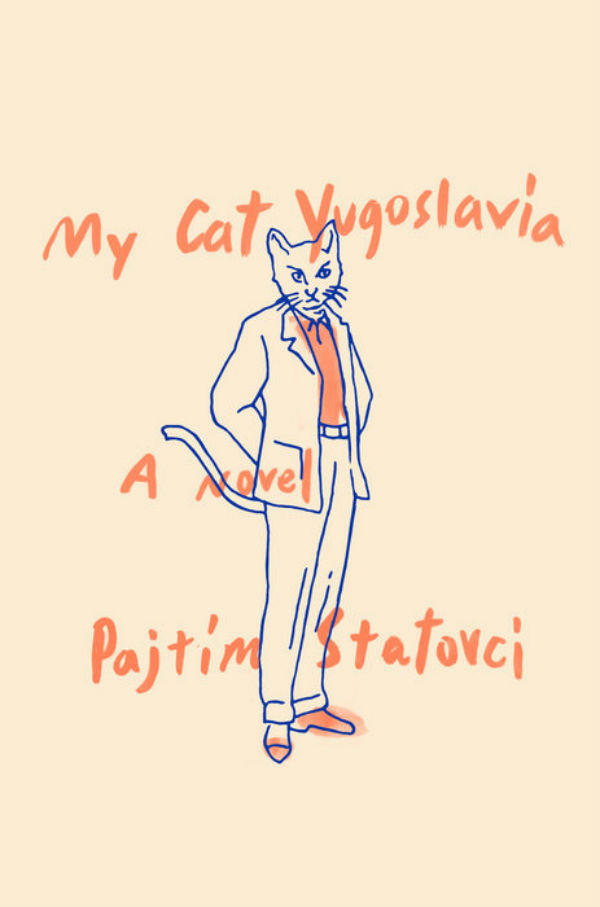 There is much that is mysterious in Pajtim Statovci’s debut novel, My Cat Yugoslavia, originally written in Finnish and translated by David Hackston. The mystery starts out with the narrators—there are two—and continues with the surrealist elements of the plot, such as a talking gay cat.

Bekim is a young man living in Finland and taking university courses, though he seems unclear as to why. He has zero interest in his studies, works a dull job to support himself, and in general seems rather lost. In the novel’s opening scene, he meets a man in what is clearly an m4m chatroom or some version of Grindr. The man comes over, the two have sex, and though the encounter is mutually enjoyable, narrator Bekim gets spooked and asks the man to leave. This is only the first episode in a long battle with intimacy. Over the course off the novel, Bekim buys a boa constrictor in an attempt to commit to something; meets and moves in with a humanoid cat who becomes his lover and abuser; takes a trip to the former Yugoslavia, the country of his birth, perhaps in an attempt to heal; and last but not least, meets another man back in Finland, falls in love, and purposefully sabotages the relationship at its peak for no apparent reason other than fear.

In alternating chapters, Bekim’s mother, Emine, narrates her own tale, starting with her girlhood in Yugoslavia—specifically, in Kosovo, near the capital Prishtina. Part of the Muslim Albanian minority in the country, Emine is an intelligent, ambitious girl whose heart is broken when she comes to understand that her role in life will be that of wife and mother, nothing more. Her arranged marriage occurs during the 1980s, amidst rising ethnic tensions, protests breaking out across the country, and political instability making life miserable for many. Emine’s marriage echoes that political unrest, as her husband, whom she found attractive and kind before the wedding, turns out to be violent and demanding.

Nonetheless, the two have children, leave the countryside for the city, and eventually flee Yugoslavia when the war breaks out. As immigrants to Finland, they suffer neglect, culture shock, and discrimination, which makes the shining beacon of a new life dim. The children—including Bekim—grow up and eventually leave, as does Emine’s husband, who yearned all along to return to Yugoslavia.

The novel intertwines the two storylines, making the parallels stand out. The biggest is the abusive relationships that both mother and son find themselves in. In Bekim’s case, the relationship is surreal, as the unnamed cat remains both animal and human throughout their time together, never clearly one or the other. We learn later in the book that as a child, Bekim had intense night terrors and was afraid of cats and snakes, which makes his choice of adopting a boa constrictor and beginning a relationship with a cat not only interesting but a testament to his character, of which we don’t get much of a sense otherwise. In other words, Bekim is deliberately facing his fears through his actions, so that even though he seems stuck and stagnant, he’s actually moving forward.

Another parallel between the two narrators is their intense sense of shame. For Emine, shame is an ever-present threat. If the house isn’t spick and span, if the courting rites aren’t adhered to, if she raises a fuss when her husband-to-be abuses her on the way to the wedding—any and all of these could cast shame onto her family. Bekim learns shame as a child—it is the first emotion that he remembers recognizing—and it follows him into adulthood. Shame remains more internal for him, tied to his sexuality and gender performance (the cat, for example, proclaims a dislike for “gays,” saying he likes toms but not bitches, implying a dislike of effeminate men).

Despite the clever ways Statovci ties together the two storylines, the book feels somewhat loose, as if its various parts haven’t been screwed in tightly enough. Much of the enjoyment in reading it comes from accepting the absurd and then thinking critically about the narratives. If one were to read the book simply for entertainment, it might be found to be lacking as a work of fiction. For a reader looking for fiction that also serves as social criticism, however, My Cat Yugoslavia is both thought-provoking and emotionally resonant.

'The Stormwater Drains in Canberra' by Paul Johan Karlsen
Allan Gurganus: Mysterious Algebra
‘All In’ by Nell Stark