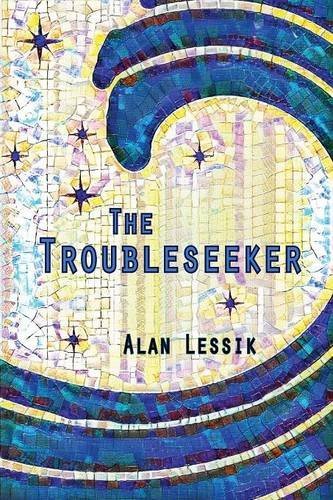 Alan Lessik’s The Troubleseeker is an audacious debut novel.  No less a figure than Caesar Publius Aelius Traianus Hadrianus Buccellanus Augustus (better known to us as the Roman Emperor Hadrian) narrates this tale. Deified after death, and therefore a demigod, he is able to interact with the immortal gods of ancient Greece and the orishas of Cuban Santería.  Unlike them, however, Hadrian can suffer the all-too-human feelings of love, an experience that extends into his post-mortal existence, and inspires acts of self-sacrifice on behalf of Antinio, the book’s mortal protagonist.  Hadrian cannot make himself known to humans, but he can, in a limited fashion (and at great cost to himself) extend his protection to Antinio, and does so several times over the course of the novel.

Antinio, despite his name, does not resemble Hadrian’s beloved Antinous (who drowned at the age of nineteen), except insofar that he too is literate, educated, and a great physical beauty.  Instead, he embodies the wily Odysseus (the eponymous “troubleseeker” of the book’s title), and his uncanny charm with women and men both continually lands him into and then out of trouble. The novel chronicles Antinio’s life-journey, which lasts far longer than ten years, and covers far more ground than the mythic islands of the Mediterranean. His facility with languages allows him to travel to Europe, and eventually he leaves his native Cuba for America, arriving in Florida before heading to Minneapolis and then eventually settling in California.  Similar to Odysseus’ journey, Antinio’s continual travels represent his search for home.  When Antinio immigrates to America, he is sundered from his wife and twin sons, but reuniting with them does not return him to himself as it did Odysseus; it is only by leaving Cuba that Antinio manages to establish an authentic identity as a Gay man.

Antino is not obsessed with the classical Greek preoccupation of avoiding one’s pre-ordained fate—nor does he share the ancient Greek distrust of that force called eros, the powerful, all-consuming love that even the gods feared because of its extreme potential for disruption.  Indeed, erotic love remains constant throughout his life, even during the repressive regimes of post-revolution Cuba and Reagan-era America, and even after he is stricken with HIV. (Lessik combines and subverts these two themes by naming the three great loves of Antinio’s life after each of the Greek Fates:  Antinio’s fate is to love, and he in turn loves Fate.)  For all that nearly every character takes his/her name from Greek myth, the Greek gods themselves play but a minor role in the narrative; the actions of the Cuban orishas result in greater consequences, as when Babalú Ayé (the orisha of disease and healing) creates the virus that eventually leads to AIDS.

Still, this book is not a recycling of Greek myth in Caribbean drag, any more than it is merely a retelling of love during the recent devastation wrought by the AIDS epidemic with added fantastical elements to make the suffering mythic in scope. Lessik deftly weaves several narrative strands to create this story, which becomes greater than any of its single parts. Far more than the life story of one immigrant’s journey, or a Gay man’s search for love and/or identity, this odyssey is a potent mash-up of contemporary history, Greek mythology, Caribbean Santería, and queer eroticism, and in its own way is just as epic.