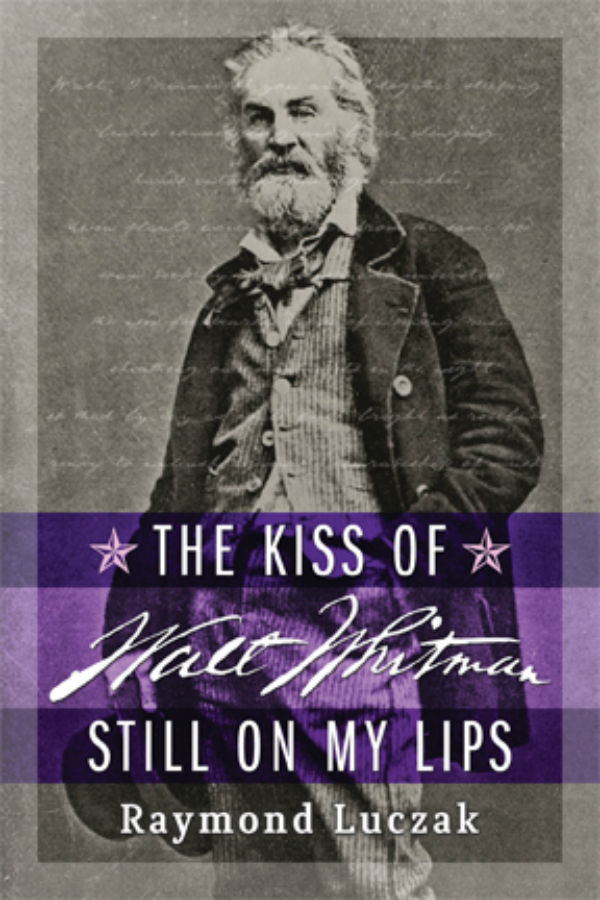 I can never understand why poets get bent out of shape when readers assume their poems are autobiographical when the first person ‘I’ is used.

I’ve always seen it as a testament to the poet’s skill that a reader would want to make that assumption. After all, a poet asks us to use our imagination to enter a world other than our immediate one.

Raymond Luczak’s new collection of poetry, The Kiss of Walt Whitman Still on My Lips, is a book so good that it makes us want to imagine there is no fictional barrier between the author and us.

Divided in five different sections with almost all poems approximately nine lines in length, the collection teases us with the idea of an organized tribute to Whitman, which is an earnest deception. No gay poet can restrain themselves that much when dealing with one of their heroes. The entrances and the exits of the divided parts provoke in intriguing ways, especially with the real world now devolving into a potential dystopia.

In one section, after we’re introduced to “…snapshots of men and women wrapping arms/around each other without the slightest shyness,” Luczak poses the question: “Isn’t that what you’d envisioned of the future?”

You could say that answer is given at the immediate start of the next section: “Enemy rain machine-gunned the windows./My front line of soldier-plants survived.” The disturbing intersection of the domesticity and war unnerves in an effective tonal shift.

From the title alone, This Kiss of Walt Whitman Still on My Lips, raises an important ambiguity in the use of the word “still.” Does it mean Whitman remains bodily present or that he’s an obtrusive yet ubiquitous poetic touchstone? Or both?

Much in the spirit of Whitman, Luczak is an admirably greedy poet. He wants both. Somehow he manages to re-energize the old-age gay debate: heterosexual normativity or remain true to perhaps our more innate, promiscuous natures.  Luczak writes, “…Everything gets stated upfront./The one night stand is a pre-prenuptial agreement.” What a wonderfully tricky poet! Contained in the furtive encounter is a longing not just for sex, but something that perhaps, one day, even if that day is very, very far away, a quest for marriage. Which one wins out?

At times, you think marriage.

And to Luczak’s credit, he isn’t afraid of sounding like an old fogey: “We’ve reduced ourselves to pixels and numbers,/touching cock but never another human being.”

But then, there’s another poem that upends our expectations: “Sentimentality’s a garage sale. No one’s buying.”

In fact, there are a lot of strong one-liners here, so many that you don’t mind the misses, which is inevitable when you throw out this many jokes.

Here’s one of my favorite:

…I’ve been had
with his promises of deeper knowledge,
a greater command of the universe.
I’m left with stale peanuts.

Humorous self-deprecation and a healthy dose of self-loathing—a necessity in any first-person poetic contemplation—also surfaces.  Luczak admirably deflates some of his philosophical inquiry with glib self-doubt:

…Sex has lost its mysticism,
its wanton mysteries exposed like a magician’s secrets.
How the hell can I compete with the body I have?

Not only does Luczak channel the spirit of Whitman, but he also captures the streamlined sincerity of Adrienne Rich in her landmark “Twenty-One Love Poems [(The Floating Poem, Unnumbered)].” The unadorned phrasing in both feel genuine and truly risky. Here’s Rich writing about her lesbian relationship:

…your touch on me, firm, protective, searching
me out, your strong tongue and slender fingers
reaching where I had been waiting years for you
in my rose-wet cave—whatever happens, this is.

You can’t help but here the beautiful echoes of Rich in the following:

You didn’t trim
your locks. You knew you had to seem unkempt,
wild enough to inspire terror in the untamed.
You knew what lurked between their legs,
the untenable desire to master the body’s scriptures.

Almost generous to a fault, Luczak’s poems salute Whitman and at the same time he respects him enough to question some of his underlying notions of love, community, and self. He never pushes him away entirely, but he confronts him with a wicked sense of humor and a remarkable combative deference, as in the best parental/familial relationships.

Learning to Poem: The Lifespan of a Literary Crush
'Head Trip' by D.L. Line
Cleanness by Garth Greenwell