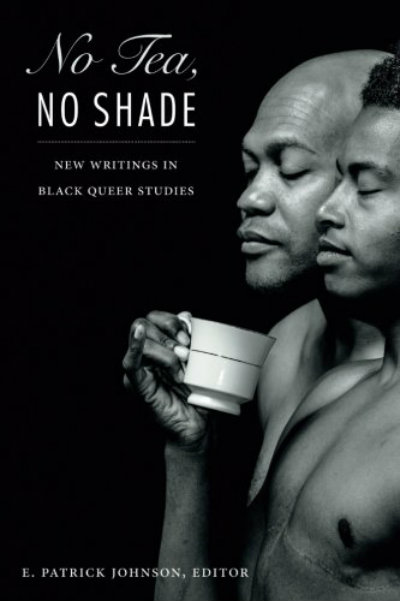 In 2005, Mae Gwendolyn Henderson and E. Patrick Johnson edited Black Queer Studies: A Critical Anthology. BQS was a first of its kind text, seeking to break ground and bread between queer studies and Black studies; it was a success. With its focus on academic intersectionality, the politics of representation, queer studies pedagogy, and Black queer fiction, BQS gave a necessary voice to those pushing for liberation on multiple identity fronts.

Johnson, a performance studies scholar and the author of Appropriating Blackness, revisits Black Queer Studies with a follow-up anthology: No Tea, No Shade: New Writings in Black Queer Studies. An intricate bit of drag culture slang, “no tea, no shade” indicates that the unbridled truth is about to be told. Its presence in the title promises the reader an unparalleled encounter with Black queer forthrightness and––most importantly––Black queer joy: joy for one’s resilient community, one’s fraught history, one’s art, one’s scholarship, and one’s magic. Especially given the latter, it is not too frivolous to mention an anecdote: No, Tea, No Shade was published several months after the white drag performer Jeffree Star unveiled his new liquid lipstick by the same name. Regardless of whether or not it was premeditated, Johnson’s new anthology performed the intellectual snatch to end all intellectual snatches. Eschewing capitalism and anti-Blackness, Johnson reclaimed four words that should be never be sold for $18.00 a vial, but exchanged freely between queens of color.

No Tea, No Shade comes onto the scene during a time of ongoing movement-building and extreme necessity, eager to bend (to queer?) its form to fit the liminality of the moment. From Black queer women co-founding #BlackLivesMatter to the devastating impact policies like “Stop and Frisk” have on transwomen of color, our world is queerer, louder, and more wounded than the one BQS entered in 2005.

Just as an asterisk at the end of trans* signifies unfinished business and evolution, so do the endnotes following several of the anthology’s nineteen works. “Since I began writing this article, antiblack violence perpetuated by the police has escalated,” Jennifer Declue writes in an endnote that extensively timelines the state-sanctioned violence against Black people in the United States.

Given that we are living in an era where “big six” publishing deals are readily gifted to white supremacists, one has no choice but to read/write between the lines and judge each book by its cover. While BQS was covered by a tame aerial portrait of Johnson, face obscured and hands folded in contemplative grace, No Tea, No Shade’s exterior makes no apologies for its queer interior. Now is not the time for hiding. Two Black people, as radically at ease with their proximity to another as they are with their masculinities, are positioned in profile. The individual in front holds a white teacup, pinky extended in a tell-tale fashion; they bear the marks of a bilateral mastectomy across their chest. In black and white, the composition evokes the scarred carte-de-vistes of Gordon, the runaway slave. What does it mean when the Black queer wound is reclaimed––in the name of liberation––by its rightful heir? As No Tea, No Shade contributor Alison Reed notes in “Spectacular Absence and Post-Racialized Blackness in (White) Queer Theory”:

We can here expand Robyn Wiegman’s notion of prewhite injury, which explains the tendency of white people to disown their privilege by claiming nonwhite identity […] Wiegman discusses the white liberal tendency toward a kind of victimized whiteness born out of a class-based solidarity or historical patterns of immigration and racialization. This leads to fallacious claims to prewhite injury, in part motivated by affirmative action backlash, and set into motion by ‘the guise of an originary discursive blackness that simultaneously particularizes and dis-identifies with the political power of white skin.

No Tea, No Shade’s largest strength is its intimate relationship with its historical and theoretical origins: the text conjures up legends long ignored by white-dominated queer studies, including the Harlem Renaissance performer Gladys Bentley, the drag king MilDred, and Black Lace, a 90s-era erotic magazine by and for African-American lesbians. The anthology’s opening article, Jafari S. Allen’s “Train Up a Child in the Way Ze Should Grow,” requests that the reader think of Black queer history as being rhizomatic rather than rooted, thus foiling the dominant, the normative, and the conventional. Working within this framework that sprawls out instead of one that meekly inches upward, “Train Up a Child” casts a nod to Cathy J. Cohen’s seminal 1997 essay “Punks, Bulldaggers, and Welfare Queens: The Radical Potential of Queer Politics,” which was collected in BQS:

Think, for example, about Cathy Cohen’s skillful and timely reversal of strategic early twentieth-century DuBoisian and Lockean politics of representation and respectability, to focus precisely on ‘punks, bulldaggers, and welfare queens’ toward finally achieving the ends for which a preceding generation of Black scholars had also fought. The Black/queer rhizome is generative, as it inspires connection beyond a staid, linear genealogy; it rejects old teleologies of heteronormative natural ‘progress’ from a single root or (family) tree. Feel here the ineluctable association and relatedness with ‘intersectionality.’

Given that Allen’s work sets the stage for the essays which follow, one assumes that anthological form would fit content. In lieu of nineteen thematic chapters, each one devoted to a specific writing, one imagines each piece of writing linking back to its predecessor (and vice versa) in delicate ways that transcend any traditional sense of space, time, or ordering. As many of us armchair/barstool/bathroom theory readers know from our own onerous attempts at digesting the likes of Judith Butler: queer theory is messy; it’s complicated. That’s part of the allure (the other draw is slightly less noble: through understanding the work, we stand the chance of better understanding ourselves).

In fact, many of the works included in No Tea, No Shade seem uniquely poised to support, have a conversation, or spar with one another’s theses, respectively.

La Marr Jurelle Bruce’s “Black Drag, American Cinema, and Heteroperpetually Ever After” and Jennifer Declue’s  “Exploring Cinematic Black Lesbian Fantasy, Pleasure, and Pain” are case studies in the depictions of Black femininities in three western films. After reading Bruce’s argument that Black characters often exist to reinforce white systems, one craves a hopeful exploration like Declue’s, in which Black queer women are allowed to exist, fuck, achieve orgasm, and navigate the varying aftermaths thereof independently of what Bruce refers to as ‘heteroperpetuity’. Kaila Adia Story’s “Respectability Politics and the Cultural Marketplace of Sameness” is the ultra-contemporary younger sister text to Kortney Ziegler’s “Black Sissy Masculinity and the Politics of Disrespectability.” Given the identities for which they labor, one wonders if Kai M. Green (“Mobilizing a Trans* Analytic”) and Amber Jamilla Musser (“Adding Lesbian Feminist Mother Poet to Black”) will ever find common ground.

No Tea, No Shade is aptly dedicated to ‘All the Queer Foremothers and Forefathers.’ Chapter after chapter, their names are uttered in a litany of intelligentsia: James Baldwin. Roland Barthes. Judith Butler. Cheryl Clark. Michel Foucault. bell hooks. Eve Sedgwick. However, no other specter or legacy is summoned as frequently than that of uncontested queer foremother par excellence: Audre Lorde. From “Uses of the Erotic” to “The Master’s Tools Will Never Dismantle the Master’s House” and “Open Letter to Mary Daly” to “Age, Race, Class and Sex: Women Redefining Difference,” one realizes the lasting impression Lorde made on a discipline which, a quarter-century after her passing, is coming into full bloom.

Were Black queer studies to refute Allen’s rhizomatic theory and embrace a linear, rooted structure, Lorde would most certainly be its taproot, drilling down and anchoring the discipline and its many branches. She is the reason why we exist and continue to labor for the humanity of others in academia and within the streets. Given the labor occurring in contemporary activism, readers might find the number of works by and/or regarding the transfeminine within No Tea, No Shade’s pages underwhelming. This disconnect between new theory and ongoing praxis is the anthology’s greatest impairment. However, a silver lining appears: this glaring absence also suggests that Black queer studies has room for new voices, for subsequent anthologies, for growth (be it rhizomatic or rooted). The discipline is far from stagnation.

In the anthology’s closing essay, “Generations of Black Queer Brilliance and the Mobile Homecoming Experiential Archive” Alexis Pauline Gumbs and Julia Roxanne Wallace thread Lorde’s 1978 poem “A Litany for Survival” throughout their story of documenting first-person narratives of Black LGBT elders across the United States.

The poem speaks to this very hope for growth:

For those of us who cannot indulge

The passing dreams of choice

Who love in doorways coming and going

In the hours between dawns

At once before and after

Seeking a now that can breed futures