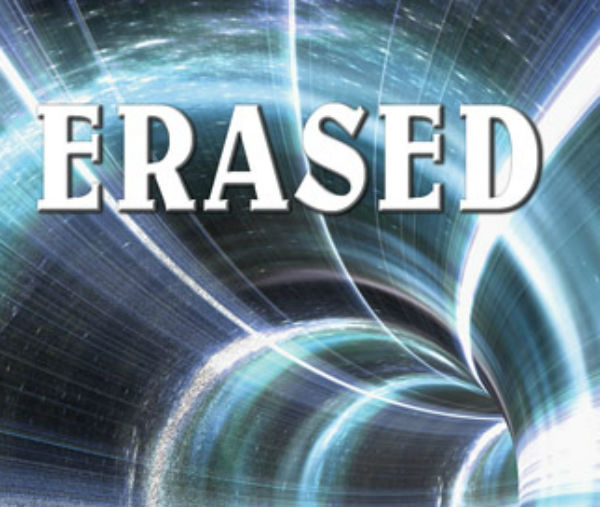 Erased opens with the quintessential cop car chase. Lights flashing and sirens blaring, San Francisco police officer Dani Barsetti is racing to stop a bomb from detonating at a company responsible for the banking of rare seeds. She also hopes to catch the criminal responsible for endangering the inhabitants of the city. She’s assisting FBI Agent Frank Bryan, but something is a little “off” about this guy and she’s not sure what it is. Maybe he’s just holding his cards too close to his chest, but why doesn’t he know the time is displayed on an on-board computer on the car dashboard and why does he keep checking the fitness monitor on his wrist?

Bryan has told Dani the man they are chasing is eco-terrorist, Leo Darius. When they pursue the suspect into a building, Bryan runs ahead, tracking Darius to the roof of the building. Dani arrives on the scene a few minutes later only to find the agent dead and the suspect gone. When she leans over to examine Bryan, she discovers a silver cylinder with glowing blue lights lying next to him. She picks it up and, poof, she disappears—into the future and a mystery she couldn’t dream up in her wildest imagination.

When Dani disappears, she leaves behind her wife, whom she loves deeply. When she returns she finds herself in a parallel timeline; Gemma is stuck in a dead-end job, never having moved beyond it to the exciting career she had before Dani picked up that cylinder. Not only that, but Dani’s beloved dog, Tucker, belongs to someone else—and Dani is now a stranger to Gemma.

As Dani struggles to figure out who’s lying and who’s telling the truth in the future and how to accomplish the assignment she’s been tasked with when they sent her back, she also must struggle with loneliness and frustration brought on by returning to a present where she doesn’t even exist. Dani hopes she can make her wife, Gemma, fall in love with her all over again, but she’s not having an easy time of it. She also hopes to make Gemma realize her potential by convincing her to leave her job and form her own company. Whether or not Dani can pull these things off in the limited time she has is uncertain, but those details may be the least of Dani’s worries since she out of sync with her current present and her health is failing because of it. As Dani uses her experience as a police officer to search for answers and find Darius, she also hopes to find a solution to her own problems but the solution, like Leo Darius, keeps escaping her.

The characters of Dani and Gemma are beautifully drawn and the struggles they endure in their relationship after Dani returns from the future enhance and bring poignancy to the story. McCoy has written transitions between present and future skillfully while executing technical explanations which are easy to digest. The cast of minor characters is extensive, but each is easy to keep track of because they are all unique and most are multifaceted, some giving us cause to suspect them and their motives.

The story line does not follow the normal time-travel cliches because most of the action takes place in the present, only taking cause and effect from the future reality. As the story comes to its final conclusion, there is a satisfying resolution to each aspect of the narrative. Erased is a well-crafted story; even those who don’t normally like science fiction or time travel tales will enjoy this cleverly written book.

‘The Clancys of Queens’ by Tara Clancy
‘Testo Junkie: Sex, Drugs, and Biopolitics in the Pharmacopornographic Era’ by Beatriz Preciado
'Swearing Off Stars' by Danielle M. Wong