Benjamin Alire Sáenz: On Growing Up and Self-Expression

Benjamin Alire Sáenz: On Growing Up and Self-Expression

Salvador Silva may not seem like a poetic soul. Silva, the protagonist in Benjamin Alire Sáenz’s latest novel, punches out of reflex and isn’t always honest with himself or his friends. Yet somehow his voice is still lyrical and authentic at the same time, a signature mark of Sáenz, who has the uncanny ability of depicting teen boys as both tough and sensitive, gruff and poetic, difficult and tender, beautiful and real.

The punches surprise Salvador, as he has just begun to discover that he is capable of violence. “When we’re kids, we have a certain idea of who we are. [As we get older] our actions don’t match up with that. We discover we’re not who we thought we were,” Sáenz said in an interview during a two-week book tour of The Inexplicable Logic of My Life. “We have to love ourselves with those flaws. It is part of growing up.” 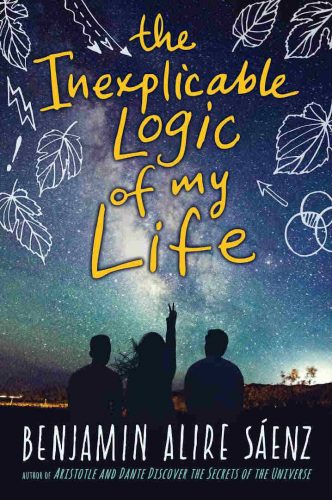 Helping Salvador learn to live with his flaws are his best friends and his father Vicente, the kind of father we all wish we could have: “Vicente is a romanticized figure of who I would have liked to have been,” Sáenz admits. “I always wanted to be a father.”

While he may not have had the opportunity to raise children, Sáenz has been a mentor and instructor throughout his life and has depicted many memorable parents in his young adult books–a genre where grownups are often in the periphery.

“Kids find father figures one way or another. They need them. A lot of young men found a father figure in me as a teacher, and that’s incredibly beautiful and normal.”

Though his books contain hot-button issues of borders, faith, and so-called “alternative families,” Sáenz doesn’t set out to be political or make a statement: “I’m a citizen. I’m a human being. I’m a writer. Everything I believe in will come out in my books, and that’s the way it is.

Sáenz’s love for his young characters and readers is apparent in his thoughtful depictions of teen life and in the positive response from fans. He has won a variety of awards, including the PEN/Faulkner Award and the American Book Award for his adult and poetry books. Yet it is Aristotle and Dante Discover the Secrets of the Universe that inspires fan art, videos, and songs.

Does he mind that one book garners so much attention?

Plus, he loves his fans, saying, “I’m very touched by them. They are beautiful and dorky and sweet.”

And, yes, folks, he’s working with a screenwriter on a film script for Ari and Dante–and writing a sequel. “I love returning to those characters.”

Inexplicable Logic, published this month, is getting its own share of praise, though of course critics do exist. “Some are disappointed–they say it is all over the map and doesn’t have a plot, but that’s what they said about Ari and Dante. If they mean I take time to write scenes and get to know characters and spend time with them [so that readers] forget plot, then that’s fine. I create characters people care about.”

Characters like Salvador’s friend, Fito, who has been given every bad break in life–a drug-addicted mother, homeless at 17–but who is also incredibly lovable. “There are kids like that, and they are miracles. They have miserable lives [yet become] great human beings. I’m in awe of them.… [There is] no excuse for me not to be a good person.”

Another character in Inexplicable Logic that is close to Sáenz’s heart is Salvador’s grandmother Mima. Unlike Vicente, Sáenz says that Mima is not romanticized. “Mima is my mother. My mother was just like that. There are sweet, wise, kind older woman in this world, and my mother was one such person.”

But even with ideal parents and adults in our lives, life is not without its trials. Thanks to Sáenz’s careful attention to his craft and characters, readers will root for Salvador to find his way.

Lambda Literary Fellow Laura Carpenter lives with their wife and daughter in Anchorage, Alaska. Publications include The Guardian, The New York Times, Anchorage Daily News, Curve, Lambda Literary, and The Writer. They are writing a queer YA fantasy set in a world 20,000 years ago.