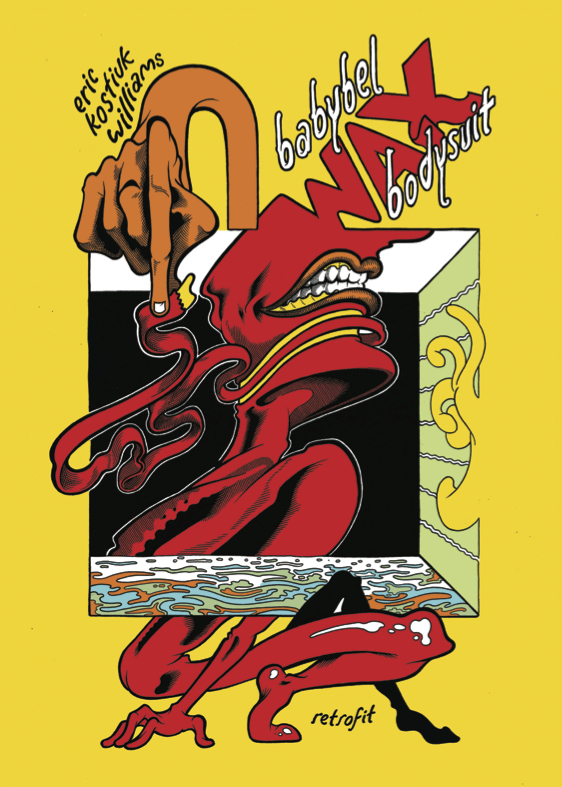 All three stories in this collection deal with “peeling back the wax bodysuit” (an analogy to the wax covering of Babybel cheese), i.e. all the multiple layers we use to hide both our fears and our egos, in this dystopian world of Trump, climate change, and pop culture saturation where we now find ourselves.

The strongest story, “Literal World,” is autobiographical. Williams recalls how as an adolescent, message boards served the function of social media, and provided a way to connect with other comic fans. He ends up moderating a board and befriending Cross, a co-monitor very different from his gay, closeted self. She’s older, Christian, and conservative. She even sends him a Bible with her favorite passages highlighted. Still, their friendship thrives. “Often, we just agree to disagree,” he explains.

But inevitably, Williams grows up, and his world expands, too. Cross seems naively conservative, confiding about Sarah Palin, “I like her, it was brilliant of McCain to choose her,” while Williams admits to himself, “I… had a feeling she might not approve of the, ah, extra-curricular activities I was growing fond of…” i.e. nights at gay bars, hook-ups and basically finding his gay identity. “I was trying on the pants of thinking I was some hot shit and had no time for geeky message boards, or conservative friends who might not have embraced me. But maybe she would’ve. Maybe our debates could have become all the richer. I’d mail her a copy of Angels in America, with all my choice passages underlined. “

Instead, he moves more toward the art, music and politics he loves, focused even more by new social media algorithms on things he likes, excluding things he doesn’t. He regrets this, concluding, “I want to see outsides myself again.” In this way, his story morphs from a personal account to an allegory of where we find ourselves now, online, and in the current political climate, where all we hear are people like us.

Williams’s artwork parallels the drift of his story, swerving from one panel to another, plunging through his computer screen into a fantastic cyber voyage, that jumps from realistic images to rows of jabberwocking jaws chanting, “You should hear what we say about you!”

Other stories include a story of a cyborg Brittany Spears-like pop star who longs for independence, and some shorter ponderings about identity, including one about pushing back against gay clones in the 80s. Regardless of the settings, these comics reflect the new uncertainties we face in these times. “We’re livin’ in a science-fiction present, kiddos!” Williams warns us, and his tales of self-commodification vs. defense of self-identity, along with illustrations of KKK members astride a Trump-headed snail, couldn’t be more apt.

'When I Was a Twin' by Michael Klein
Garrard Conley: On Surviving Ex-Gay Therapy, Writing His Memoir, and the Year in Queer Lit
Larry Closs: Bringing Back the Beats with 'Beatitude'