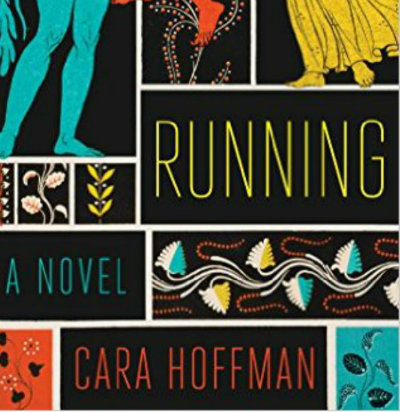 If you grow up blue-collar and book-worshiping, you spend your youth surprising people—either by what you’ve read or by where you come from, depending on what they see of you first, assuming they see you at all. You may get over it and return the condescending embrace of academia. Or you may turn against all forms of intellectual citizenship, allying yourself instead with the streets and their native autodidacts.

When we meet the two narrators of Cara Hoffman’s third novel, Running, they’ve taken the second path: straight into a demimonde of young, broke or born-poor expats circulating through the Mediterranean, where it’s warm enough to sleep outside. They’re runners, people employed to haunt train cars and draw gullible tourists back to the run-down Athens hotel they represent. (The milieu is so specific I wondered how an outsider might come into such intimate knowledge; it turns out Hoffman herself worked as a runner as a teenager.)

Bridey is a white American girl who finds the gig in the 1980s when she meets the beautiful, doomed Eton dropout Jasper. He invites her to share a room, an improbable book collection, and a bed with him and his lover Milo, a black boxer/poet from a council estate in Manchester who takes up the narrative later.

At first Bridey’s and Jasper’s meeting seems like the setup for a rather Jamesian tale: American innocence corrupted by aristocratic Old World decadence. Part of the genius of Running is that it turns out to be nothing of the sort.

We start to realize something’s off as Bridey recounts the violence of her days with unnerving flatness: during a brawl, for instance, she notes a kid “screaming in a way I hated, his eyes strained, like a frightened deer, bulging, whites showing, searching for a way out.”

Such weakness has been bred out of Bridey. In flashbacks we learn that she’s an orphan raised tough by her uncle, a loving nuclear-doomsday prepper who’s equal parts appalled and impressed when he discovers her facility with explosives. “She’d an air of resignation about her, like she was abiding the real world and might decide to get rid of it altogether,” thinks Milo.

There’s a certain suspense in wondering where Bridey’s moral compass points, and whether she has one at all. Like the gods whose ruined representations surround Athens, she’s capable of wrecking lives casually, with her head in Aristophanes’ The Clouds. In that, she’s well-matched with the increasingly drunken and desperate Jasper.

It’s Milo’s dubious fortune to survive them both. Hoffman juggles half a dozen time-frames throughout the book, one of which finds Milo 25 years later in New York. He’s acquired a Wikipedia entry and a poet-in-residence position at the New School, but he’s not exactly adjusting to the academic life. He still nurses resentment at “the bought-up world; the owned world” (as an epigraph from David Wojnarowicz has it) that once granted him and his teenage companions its leftovers ungrudgingly, as long as they didn’t ask for more.

Now, Milo guzzles Four Loko, has sex with homeless men, and compulsively searches the internet for traces of the disappeared Bridey. He lays the full weight of his emotional needs on his favorite student, a working-class Latina who’ll take Milo as a weepy pal, but would prefer he step up as mentor. She wants to go to Brown.

Thinking back to his college days after a richer education on the Athens streets, Milo isn’t sure he can recommend the classic collegiate experience:

His friends, his professors, thought Milo was an exception, not evidence that a broader, wilder intellectual world existed, and he loved them still, loved drunken nights dancing, loved praise in the classroom; whole rooms full of serious queers talking about death and rights. But he knew none of it was the kind of freedom he’d had with Jasper and Bridey, who never once called themselves a name or believed the things they did with their bodies could mean anything to anyone but them.

Undoubtedly there’s romance in Milo’s (and Hoffman’s) view of life on the street. There’s also immense sadness. Running has plenty of dazzle; it races atop remarkable sentences. But at its core are two people who, accustomed to getting by on nothing, have no idea what to do with the bounties that befall them: success, family, love.

Milo sits with his confusion. Bridey can only run. At one point, she recalls the moment she told her uncle she was leaving home: “I sat next to him and knew that if he was like me, he was starting to feel relieved, happy that he could get back to being alone.” Whether she’s right or wrong, what’s left is heartbreak.

Burn, Bodice, Burn
Laurie Weeks: Making Magic Out of the Real
'The Wonder' by Emma Donoghue