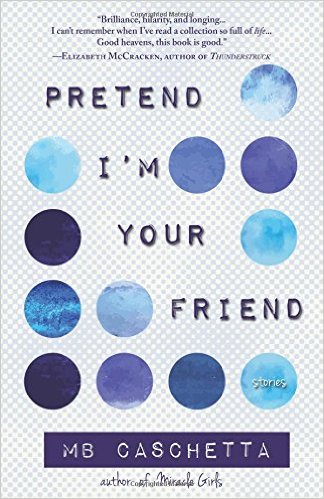 No pretense is necessary. MB Caschetta, author of Pretend I’m Your Friend and two previous books of fiction, is your friend, which she proves by gifting you these eleven deftly written short stories. Their characters are familiar as pals you’ve watched as they disengage from parents, find love, sex, both; also, jobs, families, freedom, insight. Reader, prepare to be delighted. For as knowable as these characters are, they continually surprise. By the way, there are more women here than men; all are equally vested with humanity.

Caschetta’s pen is light and profound. For instance, as she is about to give birth, Mary Kay, a character in the story “What’s Not My Fault,” thinks about “the battering ram of everyday life.” Life as a gauntlet; over-dramatic or true? The story jumps; she is in a hospice and observing that, “dying was like living, but with fewer obligations”–true again, and a one-liner. She is 57 years old. In a previous story, “Sorry Mrs. Robinson,” its title echoing The Graduate’s slinky predator, Mary Kay reflects on a long-past extramarital affair, and how she coerced her teen-aged daughter to help hide the truth from her spouse. Life, in these stories, is an accumulation of milestones and disappointments, all to be viewed with a democratic eye, no one event privileged over the other. Readers are reminded there are no sure bets, as exemplified in the opening of another story, “A Line from E.L. Doctorow”: “When dreams come true, disappointment always follows.” As Baba Ram Das, or my mother, said, “First enlightenment, then the laundry.”

The publishing industry likes the somewhat schematic description “interconnected” when it comes to story collections such as Pretend I’m Your Friend. Yes, many of these stories do share characters, a generous trait which allows more understanding into lives portrayed. But my experience here was subtler than “interconnected”–a word which to my ear sounds like freeway mapping and not revelatory art. For my money, the stories waft. Of waftiness, there is a sense, characters entering center stage, disappearing like one of Shakespeare’s witches into stage fog, reappearing 50 pages later and 20 or so years older. In “Marry Me Quickly,” Alice James and family embark on a sort of pilgrimage to see her brother Andrew marry his long-time love Wilhelm. But she is introduced as A.J., a young woman in the first story “Hands of God,” when she and her friend Helena visit Italy for a one-week adventure. There’s some straight-ahead heterosexual banging, but more telling is A.J.’s observation of her friend smoking a joint. “Gracefully, the top pink lip touches and releases the bottom pink lip as Helena leans in for a hit.” That eroticism sets up a complexity of attraction in stories to follow.

The initials A.J. are an obfuscation of gender, a character toying with her own preference. Sexual attraction in these stories is sometimes revealed as an interior process, the attraction coming off as a curve in Physics that veers close to a body at rest but doesn’t necessarily touch it. This is a book about a labyrinth, emotional and embodied. Everyone in this universe is in a state of figuring themselves out. After all, she’s the toughest cookie in the jar to understand, oneself.

In the title story, “Pretend I’m Your Friend,” Marie is the reader’s main squeeze, though not by choice. She seems to be acted upon rather than being the maker and shaker of her timeline. Her live-in druggy boyfriend David has taken his own life as the story begins. A superior at work, Olive (she’s “loose and beautiful”), has engaged Marie in a style of easy-to-fall-into, after-hours, in-office sex. Another author might portray these major events as, well, major events, but MB Caschetta is interested in the processes of feeling and being while these top-of-the-stress-scale happenings are in play. Yes, death and sex are important. But the more telling scenes comes when Marie stores the cat in her duffel bag on top of packed clothes, hoists it, and bikes off to board a train headed, like most runaways’ trains, to Penn Station, N.Y.C. A woman in a cashmere coat glides into her life and her cat’s. An emotional reflection of Marie, the woman tugs at “the red scarf tied around her neck” and says, both cryptically and tellingly, “‘Things didn’t work out so well here.’” The train will leave them at a new stop. The reader is invited to finish the story however she may choose.