‘Murder in the Closet: Essays in Queer Clues in Crime Fiction Before Stonewall’ Edited by Curtis Evans

‘Murder in the Closet: Essays in Queer Clues in Crime Fiction Before Stonewall’ Edited by Curtis Evans 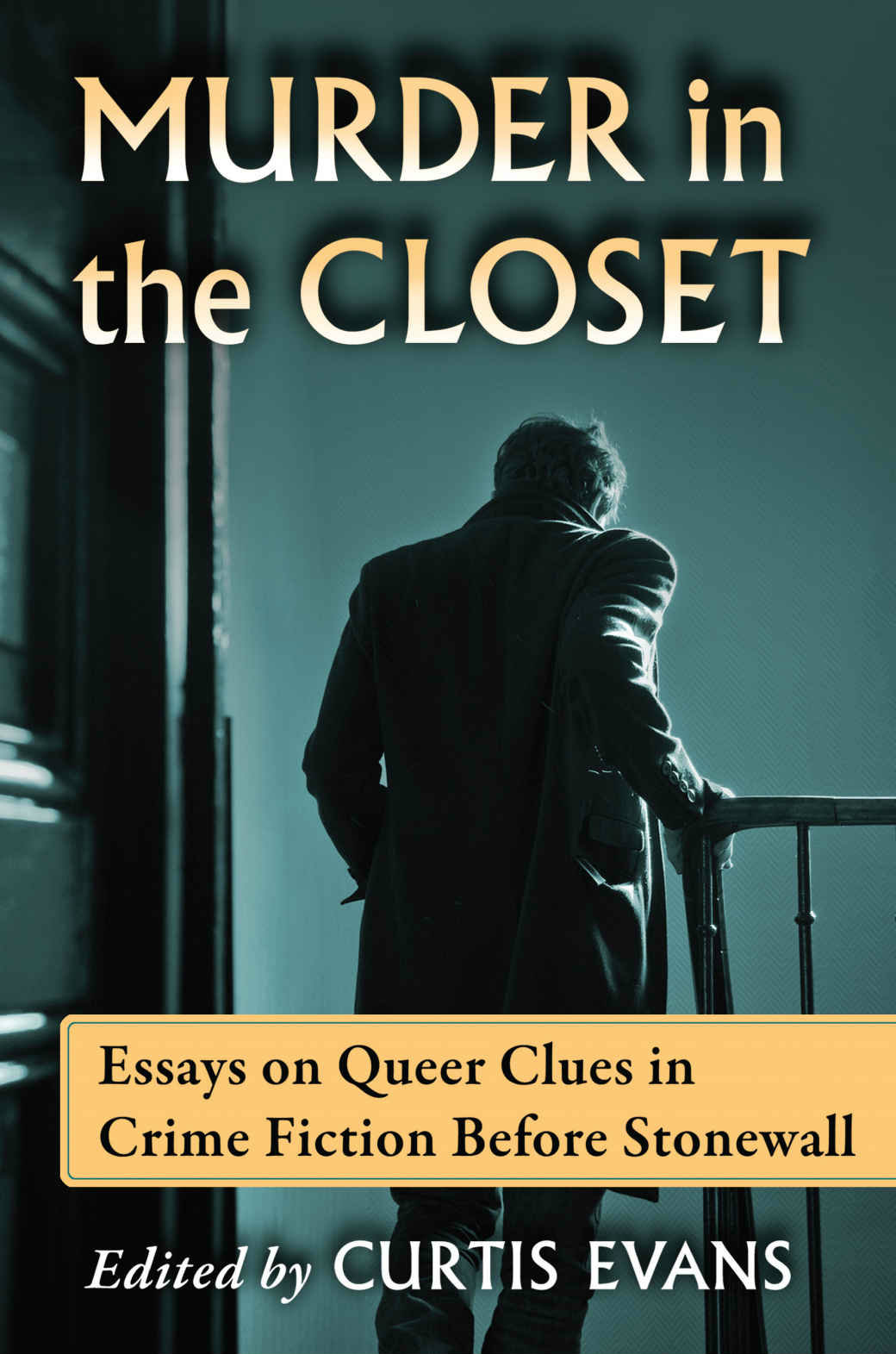 In the past ten years, scholar Curtis Evans of Tennessee has performed Herculean feats shaking up the stodgy world of the classical detective story and its literature. He defended a passel of British writers labelled “humdrum” by the late UK iconoclast Julian Symons in a mammoth critical revisioning called, cheekily enough, Masters of the “Humdrum” Mystery (McFarland, 2012), while challenging the received wisdom that the popular mystery writers of the “Golden Age” were conservative Trumps in a subsequent study The Spectrum of English Murder (McFarland, 2015). I’ve been most interested in his success at “queering” the classic detective novel, especially in his rediscovery of the gay, part-Choctaw Oklahoma novelist Todd Downing (1902-1974), all of whose books were out of print until Evans publicized his life and career in a book called Clues and Corpses (2013)—and now they’re back in new editions with Evans’ introductions. The present volume allows like-minded scholars and laypersons to recognize and celebrate the queer underpinnings that have lain dormant, hidden in plain sight, in the works of a range of authors from Agatha Christie to Arthur Conan Doyle to Raymond Chandler, all the way through to Stonewall and a little beyond.

With a bang, biographer Lucy Sussex rips away the heterosexual mask off of Fergus Hume, the Australian author who wrote The Mystery of a Hansom Cab, the best-selling mystery story of the 19th century. Hume, a likable sort, kept getting named in a series of “feasting with panthers”-type scandals in Melbourne, but somehow escaped the tragic fall of his UK contemporary Oscar Wilde. Did he pay blackmail as Wilde would not? Seems like it, concludes Sussex. Almost as long ago—in 1912—muckraking journalist Samuel Hopkins Adams wrote a novel called The Secret of Lonesome Cove, and scholar J.F. Norris makes a case for its central character as one of the very first transgender characters in American literature, the centerpiece of a moving and touching story about love and loss.

Evans’ writers find the queer linings to some of the classic British “Crime Queens” —Ngaio Marsh, Dorothy L. Sayers, Margery Allingham, Gladys Mitchell, Josephine Tey, several of whom are now thought to have led lesbian lives themselves. The greatest of all mystery writers, Agatha Christie, is written about often in Murder in the Closet. Her long publishing career, from 1920 through 1976, allowed her to track changes in queer society from the Labouchere Amendment, in sway when she was born in 1890, through to the establishment of gay rights in the wake of 1957’s Wolfenden Report. In the most arresting essay here, Michael Moon settles on a mid-period Christie spy thriller, 1942’s N or M?, in which no other scholar has identified any particularly gay characters, as a test case for the proposition that, if a detective story is a narrative in which all characters are suspects in an abominable crime, chary of social opprobrium, may we not also see it as a form in which any individual character might be queer? Moon points out that if you run the letters in the title together, doesn’t it spell, “Norm?”’—as in Homonormativity?

Editor Curtis Evans includes his own work in his anthology, and why not? Either he, or the Italian superfan Mauro Boncompagni, has got to be the leading expert on the greatest U.S. detective writer, “Patrick Quentin.” I speak of Quentin in quotes because he was not a person per se but a shifting set of collaborators responsible for a series of great mystery stories, written under three pseudonyms, from the 30s through to the 60s. Evans’ essay on an early, and especially grisly one, The Grindle Nightmare (1935), focuses on two pairs of boyfriends, a good pair and an evil one. The evil duo is strangely and even shockingly similar to the real life killers Richard Loeb and Nathan Leopold, whose kidnap and murder of a Chicago schoolboy had rocked the USA some ten years before this novel was written. Perhaps the presence of gay and lesbian characters in detective stories has waited for recognition because the genre painted many of us to be reprehensible—or at any rate, something other than positive images for young people?

Hugh Wheeler, the last surviving member of the Patrick Quentin combine, eventually published a rather daring “straight” novel, forgive the pun, in 1951. The Crippled Muse (a novel “laid in Capri”) is hard to obtain today, but it is also astoundingly decadent, overflowing with the sort of proud homosexual hauteur my college boyfriend used to admire and dismiss in a quip: “If he isn’t gay,” he would gasp, “then I’m Mary Tyler Moore.” (Hugh Wheeler’s real fame came when he shook off being Patrick Quentin and, under his own name, wrote the books for a trove of 70s and 80s musicals, including Bernstein’s Candide and several by Sondheim, including A Little Night Music and Pacific Overtures.) He wrote the new book for Debbie Reynolds’ 1973 revival of Irene—case closed?

In the glorious dawn of Stonewall, gays and lesbians could speak the name of their love within the new breed of mystery and detective story, and the authors themselves could step out of the closet. Murder in the Closet ends with smart essays on Patricia Highsmith, George Baxt, Joseph Hansen. A new and vibrant world was being born, and none of the distancing and dismissal of queer sex practices need darken the mystery novel again—though where would we be without our “queer” monsters like “Buffalo Bill” in The Silence of the Lambs. Even in our perfect world some hangovers of a darker age still throw twilight shadows over our paradise.

A Poem by James Cihlar
From Figs to Oranges: Madeline Miller on 'The Song of Achilles'
'Normal Miguel' by Erik Orrantia