‘History is All You Left Me’ by Adam Silvera

‘History is All You Left Me’ by Adam Silvera 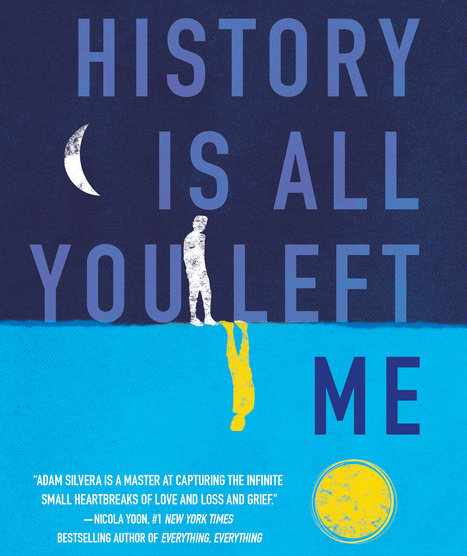 Adam Silvera is quickly becoming a YA powerhouse with his second book, History Is All You Left Me.

The novel’s protagonist Griffin believed that he and his first love, Theo, were going to be together for ever. Sure, they broke up when Theo went across the country for college. And yes, Theo had recently begun dating someone new, the kind-hearted Jackson. But, at the end of the day, Theo would return to Griffin. That was until Theo’s unexpected death.

Griffin is left behind to figure out what to do with all of the pain. He can’t talk to his best friend Wade about it, and somehow Jackson seems to be the only one who understands. The two form a strange bond as they both try to cope with their deep loss.

Told in alternating timelines, the story follows the narrative leading up to and succeeding Theo’s death. Silvera masterfully weaves the two timelines together, offering devastating contrasts between what life could have been and what turns out to be. In “History,” we see the optimistic blooming of a new relationship and how the dynamics evolve as looming adulthood makes life more complicated. In “Present,” we watch Griffin move from uncontrollable grief to a hard-earned knowledge; he discovers what life, even one imbued with loss, has to offer.

Throughout the novel, Griffin deals with Obsessive Compulsive Disorder (OCD). His OCD is not a defining personality trait but rather is one of many, including his nerdiness and his loyalty to his friends. While the OCD doesn’t play a huge role in the beginning, it slowly informs each character as they push for what they think is best for Griffin. The text is narrated by this obsessive mind, which runs each thought in even sequences. Because of the first-person narrative, readers are given intimate insight into the function of Griffin’s compulsive process. This is no single issue addressed in this book, and that fact alone is refreshing.

Many may point to History is All You Left Me as an exploration of grief. And it is to a certain extent. This book explores the rocky terrain of coping with loss and the different ways of handling death. As each character grieves, they approach the process in their own way. Some turn inward, others out. The struggle to communicate grief drives much of the story.

But even more than that, the story is an exploration of intimacy. Griffin spends the novel learning the many ways he can love those around him. He learns to reconcile the fact that his relationship with Theo, his relationship with Jackson, and his relationship with his best friend Wade are all distinct from each other. This is a refreshing premise in a YA novel, as most narratives tend to imply strong distinctions between friendship and romance, that one cannot be friends with the people they date. But the intimacy explored in History Is All You Left Me is even more complex. Silvera illustrates more nuanced views of the lines between friendship and romance. By placing many characters at different places along the friendship/romance spectrum, History explores different kinds of love and different kinds of sex. It asks how the meaning of sex can change, depending on who it is with and under what circumstances.  These are questions which plague teenagers, but rarely get tackled in books written for them.

These themes are so necessary, especially for young readers. Silvera never shies away from talking frankly about these issues and the way they manifest for people of this age group.

History Is All You Left Me gives a heart-filling story of grief, loss, and the path to finding oneself again.