‘Anybody’ by Ari Banias

‘Anybody’ by Ari Banias 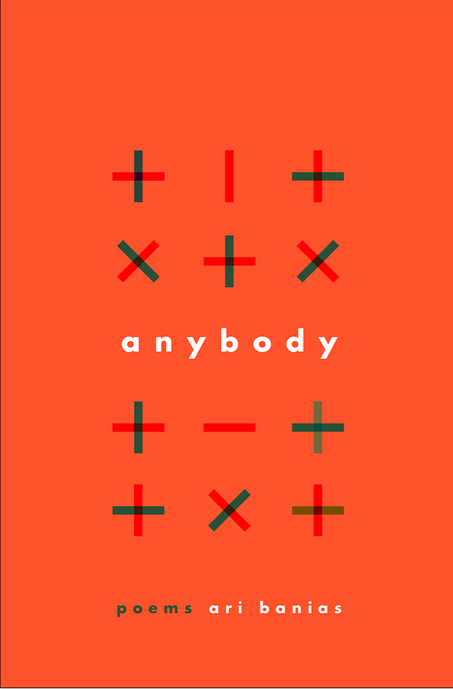 Ari Banias’ Anybody is a book that acknowledges a boundary, escapes it, and redefines it. In Anybody, names and identity markers become flexible. Banias writes, “Mostly a name feels like the crappy overhang I huddle under / while rain skims the front of me.” To name something is to fail its essence. The child you once named a girl is actually a boy. The boy that you once named white is actually trying to understand what it means to be a Greek-American, what it means to battle assimilation and the loss of Greek language. There is a constant entering and exiting of naming and categorizing, which complicates perceptions of identity throughout Banias’ debut poetry collection Anybody.

In one of my favorite instances, the speaker is having an insider/outsider experience with identity. The poem “The Men,” takes place on the ultra-gay vacation getaway, Fire Island. Banias writes, “It seems necessary to say I watch them. / It seems necessary: them. This distance / between us. How at times it can shrink, then grow.” How can the speaker both be a part of “them” and separate from “them?,” the poem asks us. How do identity and language shift depending on their proximity to others? This book traverses not only identities but geographical locations too, from Fire Island to New York City to the Bay Area, where Banias currently resides.

When I think about Banias and poets currently living in the Bay Area, I cannot help but think about Solmaz Sharif. Both poets studied at Stanford together as part of the Stegner Fellowship. There are certain lines of poetry by Banias which make me think about Sharif and the culture of political consciousness that I’m sure both of these poets have cultivated together. For example, Banias in the poem “The Feeling” questions the government, saying “But someone pays the police. We do. / That we are meant to believe the poem can say moon / but not government. Both have flags.” This welcoming of politically centered writing reminds me of Sharif, whose new manuscript Look uses words from the U.S. Department of Defense’s dictionary to question the state. Anybody does not position the political against the poetic, therefore allowing more opportunities for what the poem can be. Another line that has stayed with me from Banias’ debut is in the poem “Recognition is the Misrecognition You Can Bear” where he states, “Now I’m standing at the edge of this lake / Ohlone fished then white settlers turned / into a sewer.” Again, Banias’ work questions and challenges what might be perceived by many as common knowledge. The lake, in the Bay Area, which has been attributed to the settler state is actually taken from the Ohlone. The process of making the visible that which is invisible, is to allow its existence. Banias creates visibility and nuance to his subjects throughout the book.

Banias also writes of the everyday, the seemingly boring (a handshake or a balloon become topics of poems). Banias writes, “I don’t care what’s expected and I’m probably not doing it right… a handshake is awkward / a hug is too.” He makes me remember that there are poems in my blow-dryer, my toilet, my sneakers. The material for poetry is everywhere. Poetic language can be found in the mundane. To bring the mundane into the heightened language of poetry, is perhaps more difficult than to not write another poem about the seemingly universal. I applaud Banias’ range as a poet.

These poems are usually pressed against the left margin, with the lines running long (past the mid-page). Often times, the poems are just one stanza (not usually a monostich). Sometimes the poems will be in couplets or contain multiple stanzas. Seldom do the poems stray from the left margin or meander around the page. This stylistic choice seems suiting (and soothing) for the voice of the poems, a voice with the ability to transverse assumed boundaries and identities.

Be Dazzled is a Moving Gay Love Story
'Manning Up: Transsexual Men on Finding Brotherhood, Family & Themselves' edited by Zander Keig and ...
‘The Spectral Wilderness’ by Oliver Bendorf