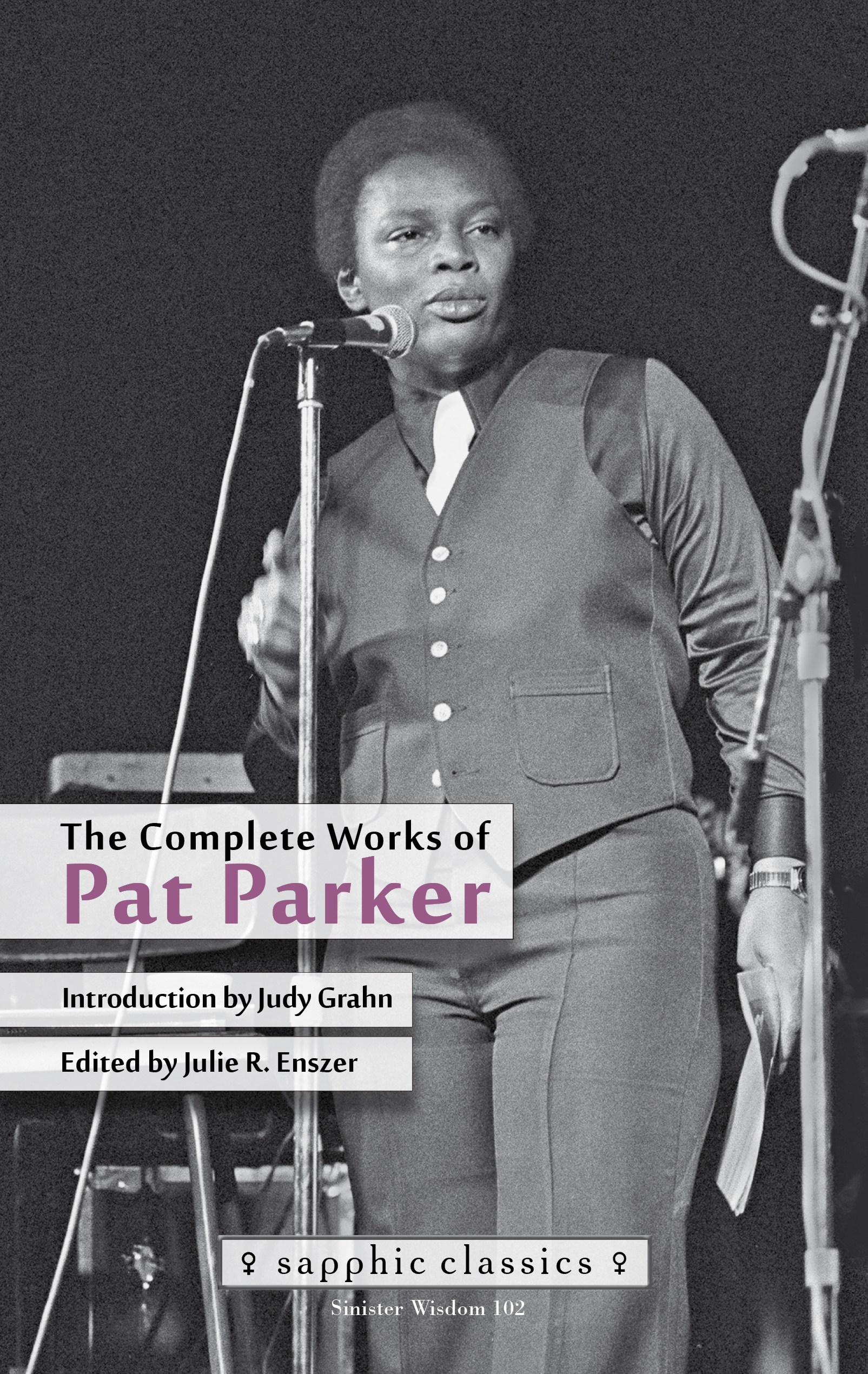 “…my closet door has no key; it’s impossible for me to go lock myself in it.” –Pat Parker

African-American lesbian feminist poet and performer Pat Parker (1944-1989) is probably best known for her collection Movement in Black. Initially published in 1978 with an introduction by Audre Lorde and reissued with additional material multiple times, Movement in Black and its title poem, written for multiple female voices, are one of the poetic LGBTQ landmarks of the 1970s and ‘80s. Although Pat Parker also published pieces in journals and anthologies, three chapbooks, and another full length collection, Jonestown & Other Madness, finding these and other work by this seminal figure has been difficult.

The arrival of The Complete Works of Pat Parker therefore comes as a revelation. Edited by scholar and poet Julie R. Enszer and with over 100 pages of for the most part previously unpublished poems from Parker’s archives, it broadens our understanding of Pat Parker as a poet and radical activist. Featuring two plays, a selection of speeches, and prose pieces–including fragments of an unfinished autobiography as well as poetry from manuscripts and all of her books–The Complete Works of Pat Parker allows us to see the author as a constantly working artist and thinker, as well as an important part of the gay rights, women’s liberation, and black civil rights movements.

Born in Houston, Texas, Parker moved to Los Angeles after graduating from high school and lived in the San Francisco Bay area until her death from cancer in 1989. Her poetry is direct, plainspoken, and written in simple, clear language that is meant to be read or recited aloud. (She also recorded an album with fellow poet Judy Grahn, who provides the foreword to this collection). The Pat Parker that emerges here is one of the ‘fore-mothers’ of the Spoken Word movement, with much of the work focusing on racism and sexism. Many of her poems have topical subjects or references, relating directly to problems or situations in the world of the 1970s and ‘80s. However, some of these ‘topical’ poems feel contemporary and could be read from stages today with few changes:

Oh sister,
my dear sister
safe in Nebraska flatlands
secluded in ivory towers
Think for one minute
If you in this decade
are so tired of
hearing about oppression:
How tired are we
of living it.

Parker could also effectively use humor to get her point across (“For the Straight Folks Who Don’t Mind Gays But Wish They Weren’t So BLATANT”) and penned a number of very touching love poems. Also included in The Complete Works of Pat Parker are song lyrics, rare photographs, and drawings.

Although the book nearly doubles the amount of Parker material available to the general reader and is titled Complete, editor Julie Enszer admits that there is more material to be rediscovered including pages of an unfinished novel. One hopes scholars will take up Enszer’s challenge to use the book as a starting point for further research and to engage more deeply in the world of Pat Parker and her work. Even more vital is that writers and readers rediscover this important figure of our community. In her introduction Judy Grahn calls Parker’s work a “drum-call to action and activism.” In this time of resurgent political engagement, Pat Parker’s hard truths, clarity, passion, and vision remain relevant and needed to take on the challenges of our still new century.

Each generation improves the world
for the next.
My grandparents willed me strength.
My parents willed me pride.
I will to you rage.
I give you a world incomplete
a world where
women still
are property and chattel
where
color still
shuts doors
where
sexual choice still
threatens
but I give you
a legacy
of doers
of people who take risks
to chisel the crack wider.