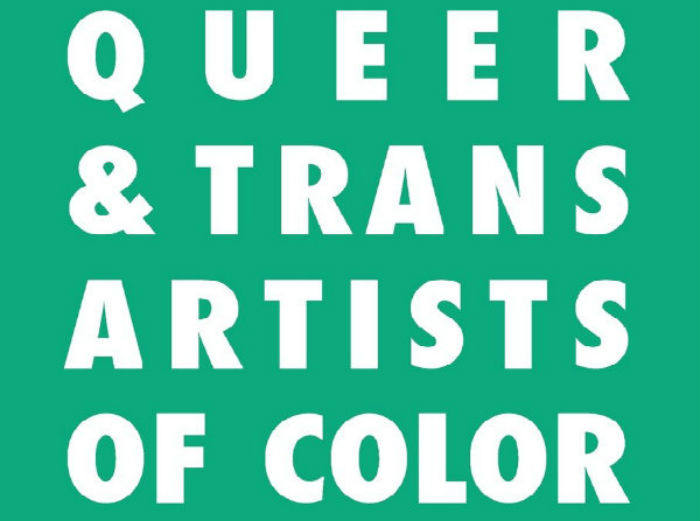 For anyone feeling terrorized by the Trump administration’s dire promises, Nia King’s Queer & Trans Artists of Color: Volume 2 is the perfect antidote to fear and an inspiring handbook of activist creations. King’s book, edited by Elena Rose, picks up where her first book Queer and Trans Artists of Color left off–sharing interviews from both her podcast, We Want the Airwaves: QPOC Artists on the Rise, and others done specifically for the book, all of which are interviews with queer and transgender artists of color. Racism, discrimination, gentrification, and harassment existed for LGBTQ folks, folks with disabilities, and people of color long before Trump harnessed bullyism to get elected, and these interviews share some of the ingenious ways people fought back and changed the world for better in spite of entrenched oppressions. King interviews sixteen creators: Juba Kalamka, Micha Cárdenas, Grace Rosario Perkins, Elena Rose, Indira Allegra, Amir Rabiyah, Mimi Thi Nguyen, Lexi Adsit, Tina Takemoto, Ajuan Mance, Martín Sorrondeguy, Trish Salah, Cherry Galette, Mattie Brice, Vivek Shreya, Kiley May. Biographies at the end of the book share more about each creator’s work and contact information for each artist.

Leah Lakshmi Piepzna-Samarasinha introduces the book by mentioning how we might not control oppressive systems like prisons, healthcare, and welfare, but we control our art, saying, “We don’t control a lot of things. But we sometimes can control a stage. And for two hours, that stage can give birth to the world we want to come.” Piepzna-Samarasinha explains that through their art, trans people are “writing [themselves] into history.”

Creators do that in many ways. Micha Cárdenas talks about designing apps to help people crossing the border find caches of water that she stashed herself, as dehydration is too often a cause of death for people seeking refuge. Grace Rosario Perkins discusses working in all white, mostly male academic settings, noting, “Work by white men is not considered identity art.” Mattie Brice builds online games out of real-life struggles, sharing as an alternative reality what it’s like to have a marginalized existence or, in Mission, what it’s like trying to find affordable food when your neighborhood becomes gentrified. “Not all games should be fun,” she notes.

Some of the folks interviewed reflect King’s background in punk culture and zines. Martín Sorrondeguy, a member of both Los Crudos and Limp Wrist, ponders the intersectionalities of punk and being a person of color, noting that punk can be political and anarchistic but also hypermasculine and super white. Mimi Thi Nguyen, creator of one of the first women of color zines, Evolution of a Race Riot, has recently published a book called The Gift of Freedom, where she examines how some immigrants feel they owe the U.S. for their “gift of freedom.” An example is Vietnamese immigrants who paid back their “debt” of freedom by developing weapons used in Afghanistan. Her insights may also help explain how some immigrants of color could possibly agree with Trump.

Besides sharing their creative projects, artists provide helpful insights for any creative activist. Poet Amir Rabiyah mentions that for readings, it’s helpful to have audiences share their own experiences before a public Q & A, so they bring their empathy to the questions. About journalism Ajuan Mance says, “Our pursuit of history is very self serving. In many cases, it’s where the passion comes from…. We want to uncover stories that are transformative.” But Mance later notes that sometimes history can turn up stories that are “kind of wonky,” sharing examples of nineteenth century black writers whose work today reads as Uncle Tomism.

More than ever, this book needs to be available for LGBTQ folks, folks with disabilities, and people of color to be able to see their experiences represented and for white, abled, and straight people to recognize these ongoing struggles. Libraries and schools especially need this book to help fight bullyism and educate.

Nia King’s introduction addresses the horrible escalation of violence against queer and trans people of color. She says, “I want straight and white people to know what we are up against. I want queer and trans people of color to know that our lives are possible. That we have a future. That we can because those that came before us made space for us in the world. Now we are trying to make space for others.”

'Monstress' by Lysley Tenorio
'The Tradition' by Jericho Brown
'Dreadful: The Short Life and Gay Times of John Horne Burns' by David Margolick