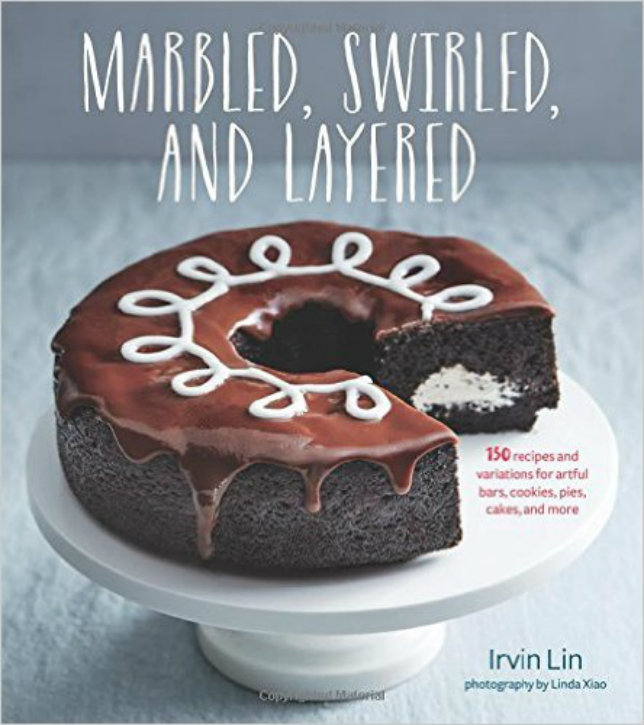 Aside from food being a necessity, its taste, presentation, and province has always seemed to be of particular interest to gay men. Food and gay culture have always been intermingled. James Beard, author of over twenty cookbooks, is the perfect example. Arguably one of the most influential mentors of a generation of chefs and who’s legacy includes a foundation who’s annual honors event has been called the “Academy Awards for Food.” Nigel Slater reputation and legacy also demonstrates this, he has written 15 cookbooks as well as the autobiography Toast, turned in 2010 into a celebrated film with Helena Bonham Carter. David Lebovitz  writes narrative cookbooks that constantly top the best seller charts. In that long tradition comes Irvin Lin’s cookbook Marbled, Swirled and Layered. Released on November 1st, it has already received praise from The New York Times, O Magazine, Entertainment Weekly, Huffington Post and Eat Your Books.

Lin started his food writing career with the food blog Eat the Love in 2010. A former graphic designer and art director, his blog stood out for its presentation, innovative recipes but also his storytelling and his unabashed queerness. If the dinner table is where topics are discussed, Irvin Lin starts the conversation with his own personal narrative when giving recipes. Posts ranged from his feelings about Obama finally coming out in support of same-sex marriage on the heels of Maurice Sendak’s death, Amendment 1 passing in North Carolina that banned same-sex marriage in their constitution, to aching and pining away for his boyfriend as he leaves to do the week long AIDS Lifecycle for the 11th time. Lin never shielded away from talking about his personal life, even when it didn’t quite relate to food. This sense of narrative shines through in his cookbook that is peppered anecdotes and stories about his life. Marbled, Swirled and Layered consists of some of Eat the Love posts but most head-notes are original.

Care can be expressed through food and Lin seems driven by this, citing his role in his queer friend circle as the designed dessert maker. In his introduction, he encourages the reader to experiment with recipes to suit loved ones, or ones own, precise palate. The book was designed for experimentation with a core recipe and alternatives.

Lin’s book has received accolades from connoisseur to chefs, some from those mention above. David Lebovitz stated, “Irvin Lin has given home-baked treats a twist, ramping them up with a range of contemporary flavors that are sure to surprise and delight.” Don’t let Lin’s experience and the high praise give you the impression that this is a cookbook for the proficient.  The recipes are readable. He devotes much of the first half of the book to help differentiate different pans, explain ingredients, utensils, and has a troubleshooting section. A refreshing change for those with food allergies, Lin devotes a section to gluten-free conversions.

More than just a collection of recipes, Marbled, Swirled, and Layered is a slice of Lin’s life with his partner AJ, his friends and family. Lin’s adopted home of San Francisco comes into play in the books, as does his original hometown of St. Louis and his Asian-American heritage. Recipes like his Blueberry and Cinnamon Swirl Brioche Rolls and Classic Morning Buns mention hipster coffee shops and long lined bakeries in San Francisco that he pulls his inspiration from. The classic St. Louis Ted Drewes’ frozen custard treat led Lin to develop his Blueberry Crisp Buttermilk Ice Cream. Asian-inspired flavors found in the book like his Ginger Éclairs with Black Sesame Pastry Cream and Five-Spice Craquelin are a nod to his Asian heritage. And visits to his partner’s family’s home in Indiana inspire recipes like the Apricot and Bing Cherry Cocoa Crumb Coffee Cake.

This is a tomb worthy of use in the kitchen, a cozy read on the couch, and even displayed on the coffee table. Marbled, Swirled and Layered is a dynamic cookbook that can live comfortably in many rooms and be of interest to many people.

Novelist and Poet Michael Rumaker, 87, has Died
'When Brooklyn Was Queer' by Hugh Ryan
Ariel Schrag: On Her New Novel 'Adam,' Writing for the 'L Word,' and Trans Inclusiveness

Steven Reigns is a Los Angeles-based poet and educator and was appointed the first Poet Laureate of West Hollywood. Alongside over a dozen chapbooks, he has published the collections Inheritance and Your Dead Body is My Welcome Mat. Reigns holds a BA in Creative Writing from the University of South Florida, a Master of Clinical Psychology from Antioch University, and is a fourteen-time recipient of The Los Angeles County’s Department of Cultural Affairs’ Artist in Residency Grant. He edited My Life is Poetry, showcasing his students’ work from the first-ever autobiographical poetry workshop for LGBT seniors. Reigns has lectured and taught writing workshops around the country to LGBT youth and people living with HIV. Currently he is touring The Gay Rub, an exhibition of rubbings from LGBT landmarks, facilitates the monthly Lambda Lit Book Club, and is at work on a new collection of poetry.  www.stevenreigns.com