‘Feder: A Scenario’ by Nathanaël

‘Feder: A Scenario’ by Nathanaël 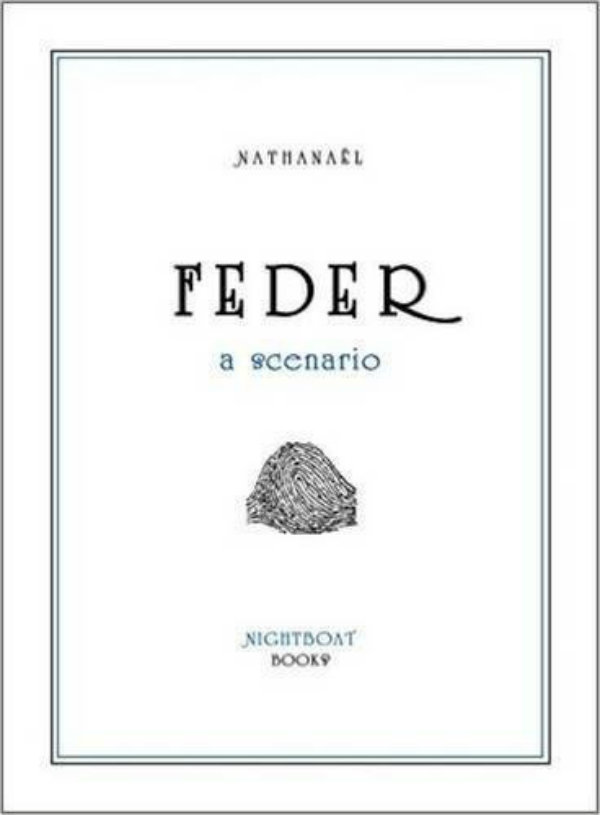 Somewhere between philosophical treatise and pastiche of a high-modern novella, Nathanaël’s Feder: A Scenario marks the author’s tenth volume with Nightboat Books. Beautifully designed, Feder follows its eponymous main character through his mundane life of steady bureaucratic labor in a highly regulated dystopian society, “a world of silence” not altogether dissimilar from the contemporary United States. The narrative, stylistically broken and spliced, follows Feder to the moment that this mundanity is broken through linguistic and temporal revelation. “Tomorrow is not a word that had occurred to Feder before. The whole mechanism grinds to a halt.” Unfortunately for Feder, these revelations have lethal consequences.The book is invested in the traditions of authors like Albert Camus, Anne Carson, Julio Cortazar, and Maggie Nelson with its intellectual rigor and theoretical underpinnings (sharing, with Nelson for instance, a great respect for Wittgenstein). Decidedly cerebral, Feder doesn’t just involve the mind, it takes place there; the associative, disembodied voice of a narrator is quite nearly pure intellect. So much of what we are allowed to see of this world, just in snatches, is architectural, the manipulation of light and space acting as a kind of structural inspiration for the narrative. What’s more, the philosophical mode has poetic qualities and both of these are dressed up in the façade of prose. This was a mode of many the philosophers in Feder’s pages: the fictional scenario to illustrate a point. While the prose is occasionally opaque in intention, the book finds its denouement in a remarkably beautiful lyric section entitled “Topography of a Bird.”

“The bubonic hour is reserved for everyone,” the Delphic narrator says in this final section. Perhaps “Topography of a Bird” appeals to the reader as a kind of rich foil for the relatively stark syntax of the rest of Feder. The section itself is concerned with a certain kind of revolution after the death of Feder, even if only a personal revolution in the thought processes of the two characters, Anders and Sterne, who reside in these lush sentences

Carson has her deft humor and Nelson a lively messiness, even Camus and Cortazar have the weight of sheer weirdness to balance out some of the denser portions of their texts. Nathanaël uses the immaculate structural intricacies of pretense and simulation as a counterweight for Feder’s density. There are so many gestures toward recognizable narrative and familiar structures. The art in these gestures lies in that fact that they rarely resolve, instead often getting purposefully obscured in technical jargon or minutiae. These gestures are laid atop one another until, to borrow an image from the book, like so many images on a single piece of film they lose all sense of immediacy, “a thick amassment of detail, so intricate as to be indiscernible. . . . The surface fallen from itself, as it were; a strange luminescence.”

So often these narrative structures imitate riddles, or games. “For a moment Feder believes he is being watched. It is a game he likes to play with himself.” This comes, again, from the philosophers’ scenario method of explanation: If we have someone named Feder with y and z qualities and we understand that the world in which he lives has a and b conditions and he is put in whatever situation, what happens? In this way revelations can be thought of as parallel to punchlines. The thing about this book is it never reaches a punchline or revelation, instead exploring scenarios via non sequitur and collaged narrative structure.

“We have made ourselves manifest. Now, there is no one left to see.” When Feder manifests himself as a temporal being, one with a past, present, and future (or put in a more classical context a beginning, middle, and end, therefore manifesting as a dramatic being, as well), he comes to his end. In much this way, the book itself defies understanding, glancing off direct appeals to meaning. Its genre is amorphous, its style at turns deeply engaging then coldly exclusive. Feder is a puzzle, a dramatized mental game, some rules of which readers might feel like they are missing. But, this reader is certainly ready to hear the riddle again; maybe next time I’ll catch on.