‘Blind Side of the Moon’ by Blayne Cooper

‘Blind Side of the Moon’ by Blayne Cooper 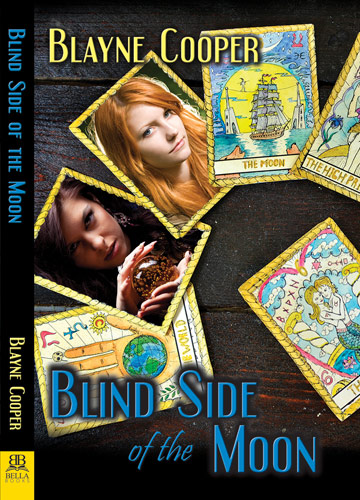 Dreams haunt Samantha Blackwell. At seventeen, she carries a heavy emotional load. She has a deadbeat father who only shows up when he wants something and no memory of the mother who died when Samantha was a toddler. At least she’s had her loving grandparents, Leola and Thomas Christos, to care for her, but their age and their uncertain seasonal business leave Samantha concerned about being a burden to them.

Samantha has grown into a scrappy, determined young woman who finds it difficult to fit in. She does have one true and loyal friend in Archie “Sully” Sullivan. Sully’s been in love with Samantha since they were children, but he understands he and Sam can never be more than friends because she likes girls.

Jane Hutchens doesn’t fit in with her upper crust family, so she’s a bit of a loner and a bookworm. Her older siblings, twins Chloe and Kyle, are the popular kids with an entourage and all the party invitations. Jane, for her part, tries to stay away from them. Ever since she came out to her family, her brother and sister tend to make fun of her and Jane’s relationship with her father has become tentative, at best, while she tries to negotiate her way with her parents.

When Samantha and Jane meet, the attraction is immediate, but, the awkward adults-in-training can’t seem to make headway with a relationship and every new encounter is timid and halting. The mystery plot advances rapidly in Blind Side of the Moon, though, when Samantha’s dreams involve Jane and danger lurking close by.

As these two young women are drawn closer together, they ignore the obvious—to tell an adult what’s going on—and try to solve the mystery of who might be stalking Jane on their own. Problems begin to intensify when the stalking texts escalate, then things start to get really creepy, letting them know the stalker is too close for comfort. All the while, Jane wants to keep her distance from her parents because of the tension caused by her announcement of her sexuality and Samantha doesn’t want to burden her grandparents any more than she already has by being their informal ward.

Thus, the story of these two is rapidly populated with characters coming under suspicion. It might be Ernie Tupper, a recent high school graduate who’s the shy, tongue-tied photographer for a local newspaper. Or it could be Erik, one of Kyle’s ever-present sycophants, who seems to have little use for Jane. It’s debatable whether or not Kyle is bright enough to use his aloofness toward Jane as a cover—she can’t be sure. It might even be Aubrey Delgado, one of Chloe’s cheer leader minions with a past involving Samantha. Maybe spurning Sam is all an act. Perhaps she’s out for revenge by aiming at Jane. Then, too, it may be someone else entirely, but who? This tale is populated by a large school of red herrings and if Samantha and Jane don’t figure it out, they could find themselves in deep trouble, hooked on a line impossible to escape.

The teen characters are each distinct with their own personalities and their own parts to play. Chloe seems to be a bit of an airhead who has no use for her little sister, but she could prove otherwise. It’s never clear why Chloe is able to “live off her generous allowance,” but Jane needs to work at Mackelroy’s Fish Hut; however, the plot is full of thrilling twists and turns, making it a page-turner—and just when we think the story is over and we’re in the midst of the denouement, there’s one final surprise.

Cooper skillfully drops red herrings along the story’s path, then makes that path twist and turn in directions the reader may not see coming. Blind Side of the Moon is a young Adult paranormal romance, but it will appeal to any age group. The well written mystery will keep the reader turning pages until the last surprises are revealed.

Kevin Coval, Quraysh Ali Lansana, and Nate Marshall: On the Queer Aspects of Hip Hop
'Command of Silence' by Paulette Callen
'On a Sunbeam' by Tillie Walden