‘One of These Things First’ by Steven Gaines

‘One of These Things First’ by Steven Gaines 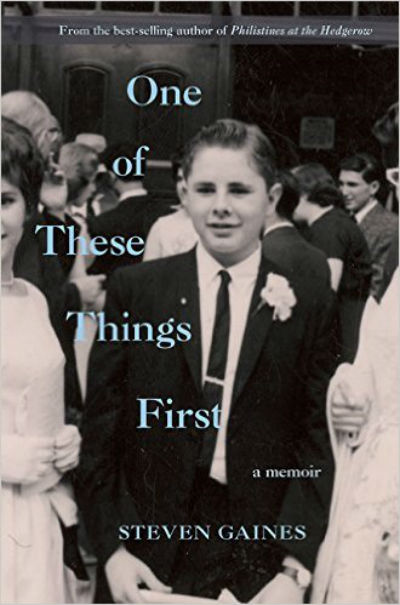 Steven Gaines’ poignant memoir of a gay American Jewish boy growing up in New York City fits in the tradition of Philip Roth whose celebrated novels took on Jewish angst and sexual conflict in the Cold War age. His characters are also reminiscent of Neil Simon, Jewish characters stuck in the harsh realities of life, but meeting these challenges with a Woody Allen sense of irony, sarcasm and wry humor.

Told from the perspective of the fifteen-year old author, Gaines traces life in his Brooklyn household from his blue collar father who goes on to become a high school guidance counselor to his anxious mother who dotes and worries over her son, to his grandmother and grandfather who run a bra and girdle store. Gaines is adept at lovingly capturing the eccentricities and drama of his family life. His grandfather is a wildly philandering man, who besides living with his grandmother Rose introduces into his household a mistress named Katherine. This ménage a trois manages to continue for many years. In later life, the grandfather takes up with a young bank teller, Carmen; however, a long-suffering Rose soldiers on providing support and comfort to her man.

Gaines, is conflicted over his sexuality and bullied by locals who seem to sense in him his homosexual tendencies. Retreating into a world of his grandparent’s store and Hollywood films at the Culver Theater, this creative and precocious kid, finds himself engulfed in fantasies. He develops obsessive-compulsive behaviors. He represses masturbatory “homo” thoughts, about a bare-chested, blue jeaned boy, glimpsed from the window of his father’s car. “The Lawnmower Boy” becomes for Gaines a recurring fixation throughout the book, a symbol of all his homoerotic yearning.

Attempting suicide, the young Gaines accepts the decision to be sent to a mental institution for therapy. However, in a quirky twist of fate, having heard that Marilyn Monroe spent time there, Gaines asks to be committed to the famous Payne Whitney Clinic in Manhattan. With his grandfather shelling out the money for his costly stay, Gaines enters a world as eccentric as his Brooklyn one. There he describes a cavalcade of wealthy neurotics who hold court: a Broadway producer (and husband to Mary Martin, the showbiz star); a book editor; and an alleged nymphomaniac Contessa, among others.

Assisted by a Freudian psychiatrist in training, Gaines starts a course of analysis, which will continue for many years after he is discharged. The focus of his therapy is to overcome his homosexuality and become a fully functioning heterosexual. This conversion therapy is a costly disaster, although Gaines finds a tenuous self-knowledge and growth in the process.

The final chapters of the book are a quickly compressed summary of the various fates of his family and acquaintances, some tragic, some life affirming. Gaines is reconciled to his hard-hearted father and makes peace with his old psychoanalyst, who suffers from guilt about his attempt to deny Gaines his true sexual identity.

Coming out at age twenty-six in 1972, Gaines, now a successful writer and journalist, reflects on his homosexuality:

The gay world in the 1970s was shallow and unforgiving. Since we were outlaws, we had outlaw sex. Gay men were dissolute beyond belief. When I whined to my peers that liberation wasn’t the same thing as promiscuity, I was told that I was a “bad homosexual.” I was indeed. In any event, the intensely hedonistic world in New York had its appeal, and I tried to embrace that world, thinking it was all that was left me. How I missed getting the plague is a miracle. I still do not feel entirely comfortable inside the gay world, despite its enormous strides toward equality. When I told a therapist that I didn’t think gay men on the whole liked me, he said that was because on the whole, I didn’t like gay men. I have none of the stereotypical talents ascribed to gay people. I can’t arrange flowers, decorate houses, or cut hair, and I don’t know or care what the best hotel is in Positano. And yet, if you asked me my blessings, chief among them was that I was born gay. And a Jew.

There is something sad about this pronouncement however, as honest as it is; a lost chance for true self-realization as Gaines remains trapped in a “stereotypical” view of the “gay world” as much as in the “talents ascribed to gay people.” Unlike the memoirs of Paul Monette or Martin Duberman, which are transformative, and lead to personal empowerment and ultimately political and cultural activism, a tone of defeat and unresolved conflict still lingers in Gaines’ book.

I realize it was a conscious choice for the editor and the author to focus on his younger self and shape the bulk of the memoir around a nostalgic conjuring of his childhood world (which is beautifully written, I would point out). But by abbreviating his coming out and his adult life and compressing it at the end to a short chapter, the reader is denied the much more anticipated story of what it means to be an adult gay man with all of one’s continuing adult conflicts. Ultimately, the book becomes a slice of life, just another story of eccentricity, less about Gaines and less about the more damaging questions of sexual repression, homophobia and its institutionalization.

Just as Gaines is reluctant to accept the apology of his psychoanalyst for all the turmoil and pain over the years he had caused by his attempt at conversion— Gaines’ failure to recognize that “that effort was wrong” and his statement that “At the time we started therapy, being straight was the better of two worlds, and even if it failed, we tried,” and his query “It was about my happiness, ultimately. Wasn’t it?”—the book is reluctant to question the legacy of heterosexual “enslavement.” The slave kisses the hand of his reluctant master and must internalize a remaining lifetime of identity conflict and self-doubt.

Gaines, in a moment of self-disclosure, toward the end of the book reveals more than he knows, by his subconscious attempt to undermine and lessen the validity of his story. He writes:

[…] nostalgia is dangerous. I continue to try to remember my childhood so I can understand it better, yet I don’t know what it is I’m trying to understand. Anyway, it’s not as if something particularly astounding happened there. We were just another frayed thread in an infinite tapestry. Every family has its eccentricities and stories. It’s only human to want to leave a mark. Every cabdriver thinks he should write a book. We all believe our lives are in some way special. We wouldn’t be us if we didn’t.

But to Gaines I simply reply: yes, something astounding did happen: another gay boy was driven to attempt suicide while an inhospitable world looked on. I am reminded that anger is also an emotion as equally liberating as love.