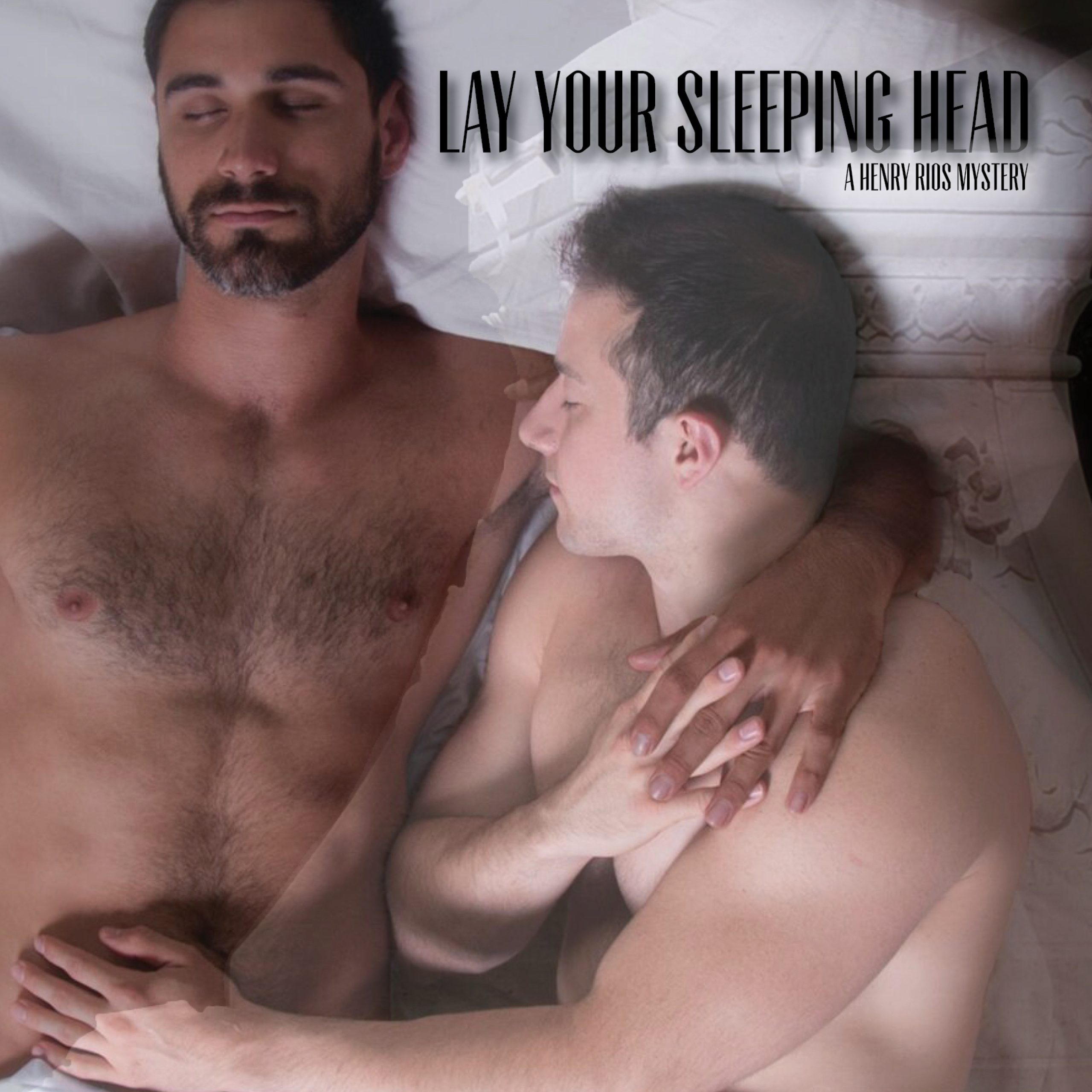 Time:  A number of afternoons in November.

Non-Speaking Roles: Nollie, a border collie, and Joey, a chihuahua/terrier.

Glenna: A few months ago I asked Wayne for recommendations for gay mysteries that I could give my gay brother, a mystery lover who I discovered had no idea gay mysteries existed. Wayne recommended Joseph Hansen’s Brandstetter and Michael Nava’s Henry Rios series. I looked both up in his guide The Gay Male Sleuth and ordered the first novel in each. Of course, I had to read Fadeout and The Little Death both before passing them on to my brother and loved them each for different reasons. Then Wayne told me that Nava had rewritten TLD and lent me his advance copy of Lay Your Sleeping Head. I found it a most compelling read. The characters and their motivations touched me more profoundly, the plot was fleshed out more fully, and, as a result, I cared even more about what was happening. The whole was just more satisfying.

Wayne: The Little Death is a fine mystery. It is the story of a San Francisco heir, Hugh Paris, whose life has mysteriously gone on the skids and who is convinced someone is out to kill him. Henry Rios, a disillusioned public defender turned detective, works to discover the reasons. Increasingly, it appears that Hugh is telling the truth when he accuses his grandfather, a wealthy philanthropist, of having sexually abused him as a child. Two murders occur before Henry exposes how the corruption at the heart of Hugh’s family has destroyed more than just his grandson. The only problem with the novel is that it was followed by six great mysteries to form a first-rate series that won five Lammy awards. The rest of the novels are so integrally connected through characters and themes that I argue the series should best be thought of as a seven-volume novel. In that light, TLD provides a weak introduction to the works to follow. Therefore, I was delighted when I found out that Michael intended to rewrite it as a first step to reissuing all seven books. The results, Lay Your Sleeping Head, surpasses expectations.

With the opening pages, one thinks the two novels are the same. Both novels are set in 1982. In both Henry, as a public defender, calls on Hugh, jailed for “being under the influence of PCP, possession of PCP, resisting arrest and battery on an officer.” In both Hugh recognizes that Henry is gay. But now subtle differences begin. In TLD Henry asks, “What gave me away?” Hugh responds, “You didn’t react at all when I mentioned my boyfriend. You didn’t even blink. Straight men always give themselves away.” In LYSH, Henry says his sexuality is “not relevant,” but Hugh plows on, “I suspected you might be when I started talking about bathhouses and tricks and you didn’t look like you wanted to retch, like a straight guy would, but then you don’t sound or act like one of us.” And soon there are major differences between the two works. Michael points out in an afterword that “less than five percent” of the original was retained in the revision.

Glenna: And the changes make the book so much more powerful, more poignant. Take one example at the very beginning: the description of Hugh. In TLD, Henry describes Hugh as “five-foot-ten…blond hair and blue eyes … an exceptionally handsome man.” In LYSH he becomes “five-six, a “beautiful” boy. This Hugh seems more fragile, more vulnerable. Henry says, “He looked like a trust fund baby and sounded like a street queen; Hugh Paris had me flummoxed.” The contradiction brings out Henry’s natural protective nature. He says shortly afterward, “I recognized that tone; it was a signal from one lonely traveler to another. We moved through a world so inescapably and aggressively straight that coming across another gay man in an unexpected circumstance was like stumbling into a refuge where, for a moment, it was possible to lower our shields and breathe.” The wording focuses the reader not only on Hugh’s plight but the struggles that Henry, now a more involved narrator, is having.

Wayne: Henry’s ethnicity also becomes more important in LYSH, as do class differences. His alcoholism is handled more subtly. Educational differences that foreshadow the Henry to come in the later novels appear. For instance, Henry in TLD does not recognize the names of several important poets; Henry in LYSH can quote from them. The change in title signifies this particular shift. Whereas the original title came from an Elizabethan euphemism for orgasm, the new title fits with the rest of the series in being a poetic allusion, this time to Auden’s famous same-sex lullaby. (The title of the fourth novel, The Hidden Law, comes from another Auden poem.) More than anything, themes that will weave their way through the rest of the novels now show up. References to Henry’s father’s psychological abuse, coupled with what Hugh has suffered sexually, prepare readers for a major arc across the seven books. Other new or more firmly emphasized themes that Glenna singled out in our discussions reminded me how important they are to the series as a whole: tenderness, a strong empathy for the underdog, the class and ethnic differences already mentioned.

Glenna: Henry’s emotional involvement is so real in LYSH. I questioned Wayne how Henry falls in love with Hugh so fast in TLD. I know why he does in LYSH. Surprisingly, the more explicit sex scenes show me how the two are navigating their emotional terrain. Before Wayne gave me LYSH, he asked how I felt about “graphic sex.” Although a bit apprehensive, I trusted that he wouldn’t recommend something too risqué for me to handle. In fact, the sex proves to be entirely integral to the story, never gratuitous or salacious. I am moved by the intimacy that Nava portrays through the sexual interplay of male bodies. Each scene forwards the plot; Nava explores the complexities of relationships on a much richer continuum than I would have imagined possible.

I think Wayne’s underlying question, however, was actually how I, as a straight woman, would react to gay sex. That caused me to reflect on the difference between me and my brother. No one ever asked me when I first knew I was straight. That would have been like asking me when I knew that I breathed air. Or when I knew that I was the legitimate heir of my mother’s green eyes and my father’s curly hair. I just always knew and never questioned who I was in my family. Why, then, when my younger brother told me he was gay, did I ask, “When did you first know you were gay?” As if being gay was something apart from having our mother’s eyes and our father’s hair. As if his gayness was something apart from breathing the air of our family. But it was, and Nava’s book helped me understand the reasons.

Not just Henry and Hugh, but all Nava ‘s gay characters, in TLD but much more intensely in LYSH, give me insight into the separateness that gay men experience in their families of origin. Henry describes his attempts to resolve his feelings now that he is in his thirties: “the disturbing feelings and intrusive memories I had avoided since I’d left home for college had begun to surface in my mind like bloated corpses rising to the surface of a lake. Flashes of anger, moments of heart-pounding anxiety, a loneliness that clawed at my chest accompanied memories of my raging father, of a childhood that felt like imprisonment and of the boy whose friendship tortured me because I wanted to be more than his friend.”

Hugh asks Henry, “‘Have you always known you’re gay?’ ‘Yes,’ I said. ‘You?’ ‘I knew I was different than other boys but not why until someone showed me.’ ‘Showed you?  How?’” How Hugh was shown, of course, initiated Hugh’s tragic descent whose mystery Henry is determined to solve. In arriving at that answer, Henry experiences a completely new relationship not even hinted at in TLD. He grieves when Hugh is murdered, but he has now opened himself to the point that he can admit another into his life—whether it is on the rebound or a natural progression is probably unclear to Henry himself. Whichever, it is completely real on his part although it leads to even greater pain.

Wayne: The ending of LYSH is completely new. To go further on that score, however, is to risk spoilers. Let us just say that it has a certain messiness that seems truer to life and thereby is, paradoxically, more satisfying. The novel also comes with a pilón, a special gift at the end. In a moving essay, Michael describes his own childhood and life as a young adult. He recounts the events leading up to the writing and publication of The Little Death. He also presents the reasons he felt compelled to recast it. All in all, the appearance of this new “old” novel should be regarded as one of the literary events of the year. One looks forward to the ripples that the revision will undoubtedly have on subsequent volumes as they are released.

Therefore, it is probably churlish of us to mention that neither of us likes the cover (although it was photographed by one of Michael’s friends). For me it smacks too much of an M/M romance. The novel is infinitely more than that.

Glenna: My problem with it is that the sleeping character facing us does not resemble the novel’s description of Henry at all, though it must represent him.

I should mention that my brother started with the Hansen novel. When Wayne and I began our ruminations about the differences between the two versions, I reclaimed TLD from him. My brother will get back Lay Your Sleeping Head instead.