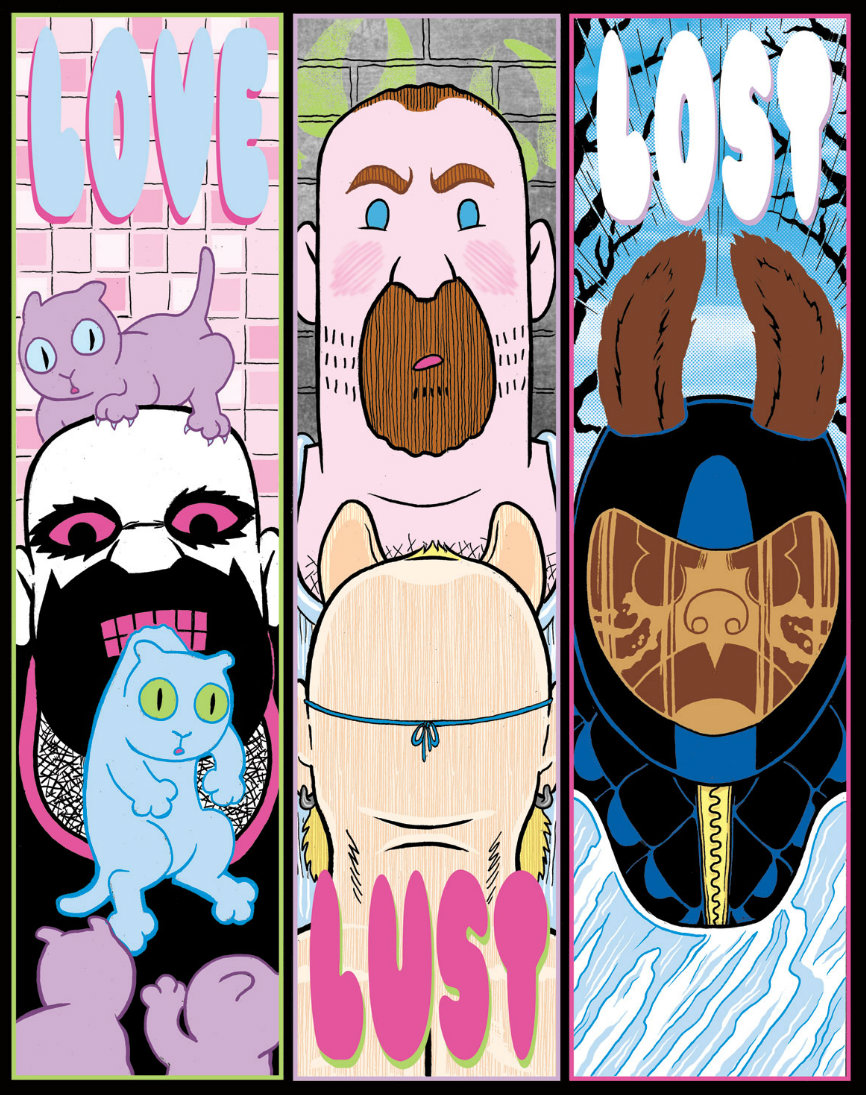 “I’m still dedicated to writing and drawing stories that I haven’t really seen in comics, especially queer comics, that I think need to exist.”

Cartoonist Ed Luce is the creator of Wuvable Oaf, a comic series that details the exploits of Oaf, a punk rock loving, cat cuddling, Bay Area bear on the hunt for love in the big city. The initial comics started out as a self-published endeavor but later iterations of the colorful and irreverent series were collected and published by Fantagraphics.

Hot on the heels of 2015’s wildly popular Wuvable Oaf debut comes this full color sequel! Still the same wuvable Bay Area bear searching for love in the big city, Blood & Metal collects a number of Oaf short stories focusing on his involvement in the local metal and wrestling scenes. Luce celebrates his love of all things wrestling/metal/queercore with his love for his cast of characters to create an immersive environment recalling Scott Pilgrim, Love and Rockets, and Archie. Also featuring tales of Oaf’s formative childhood years, and much more!

Luce sat down with Lambda Literary to talk about creating comic books, body positivity, and the spirit of Wuvable Oaf.

The title of your book is Wuvable Oaf: Blood & Metal–tell us more about what the title refers to?

With this release, I wanted to shift the focus onto some of the darker imagery in the Oaf world, specifically the wrestling and music elements.  So the subtitle refers to those respectively. I felt like that needed to be upfront or I’d run the risk of people buying the book based on just the “big dudes and cats” aspects of the first book. That’s Goteblüd on the second volume’s cover, with fire breathing demon kitties. We are not in Kansas anymore!

Why focus on the subjects of wrestling and metal this time around, one might ask? The answer is simple: I’ve been passionate about both since adolescence. But I also can’t think of two things that have stronger homoerotic overtones…despite a strident history of homophobia present in each. So what better topics to explore?

In all seriousness, the overall vibe of the new book is a little more primal than the first Oaf collection. It’s not all kitty cuddling and romantic debacles. While I still enjoy those things, I don’t want every Oaf book to be the same. Humor and cuteness abound in Blood & Metal but there are more complex, perverse things going on too, especially in the wrestling vignettes (which first appeared on Vice’s website). I got to stretch my creative legs and drawing chops with the full color format. It’s a much more intense visual experience.

I would add that this book more closely resembles the back half of the first Oaf Fantagraphics book, in that it’s a collection of short stories and strips, built from the expanded Oafiverse.

This is your second book with Fantagraphics. But Wuvable Oaf started out very DIY. What’s changed for you since Fantagraphics took you on?

Creatively, very little has changed. I’m still dedicated to writing and drawing stories that I haven’t really seen in comics, especially queer comics, that I think need to exist. Everything has layers; I refuse to put out a one-note story that’s only about identity issues, with no subtext. This book carries on my tradition of rooting things in genre, whether that’s horror, fantasy, sci-fi, sports, music, exaggerated memoir. Sometimes it’s a hybrid of multiple genres. There are several one-off strips; some read like Sunday comics, some like web comics. The whole thing holds together because the concept of a Wuvable Oaf has legs and can spread to encompass a myriad of styles and subject matters.  (Yes, that legs spread pun was intended…) 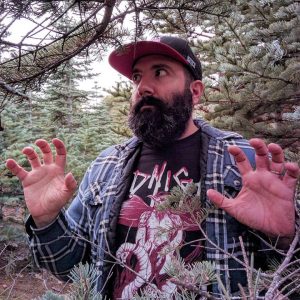 More specifically relating to Fantagraphics and change, I have a much larger and more diverse audience now. It’s been a beautiful experience. Legit rock stars are now Wuvable Oaf fans.  Film/TV creators and basic cable networks have talked with me about adapting Oaf. I’ve done work with Grant Morrison and his wife Kristan for Heavy Metal Magazine (issue #281); something that would’ve made fifteen year-old Ed crap his pants.

Fantagraphics is the home base for so many endearing weirdo creators with singular visions. As a publisher, they’ve created a foundation for me to move in new creative directions with Oaf. I intend to keep releasing material through them, but I have plenty of DIY projects on the slate, including the continuation of the numbered series. I’ll be self-publishing the long delayed Wuvable Oaf #5 very soon.

Unlike a lot of other cartoonists, you also have a product line too (both real and imaginary!) What products are you most excited about, and what led you to make them?

I’m a big believer in working with creators from different mediums, expanding the concept of the comic beyond the two-dimensional space. Blame my grad school education as a multi-media artist.

Moving more into the realm of professional wrestling, I’m excited to start producing merch that mirrors what those fans are into. Recently, I’ve been pricing custom wrist sweat bands, with embroidered logos on them. Something really cool I would’ve never considered for the music/band aspect of the comic. Wrestling fans form cults around certain athletes, so my frequent sculpting collaborator Erik Erspamer fashioned a “secret decoder” ring of Goteblüd’s face in metallic-finished black resin. Sort of a Satanic Green Lantern type of accessory, for super fans who swear allegiance to their Dark Lord wrestling hero. Could a Goteblüd jockstrap be far behind…who knows? I’ve sold out of two runs of Oaf’s kitty undies….

By the same token, the Goteblüd character still lends himself to heavy metal merchandising. I’ve made patches and pins in the last few months, meant to adorn jean jackets and vests. For the first time, I’ve looked into releasing a cassette tape version of a Goteblüd theme song; what would traditionally be played when he enters the wrestling ring. The tape format remains true to the roots of the black metal genre, where many bands can’t afford vinyl production, so the collectible cassette is the next best thing.

My merchandising philosophy is pretty simple: Make things I would buy. On those terms, I hope to avoid making anything too gimmicky. 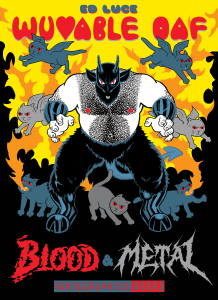 One of the cool things about publishing a book for an author is that you discover who your audience is. So who has Wuvable Oaf connected to as a role model?

Oaf has become a symbol of empowerment for some bear guys, for sure. Especially that initial shirt design, where he’s in a pair of kitty undies. There’s a balls-out boldness and ownership of being big and hirsute in that image. But I also love that some trans* folks, women and even straight men have embraced the character. I don’t like to analyze these things too much; some people just appreciate the drawing, period. But there’s definitely a message there about body positivity and diversity that people can relate to, regardless of sexuality, gender identification or ethnicity.

I will say that so many straight men embracing the character feels like a healthy indicator of queer inclusivity in pop culture. Wuvable Oaf is one of those comics that makes it OK for men to look at the bodies of other men; it’s a safe space for mutual appreciation. Regardless of how you identify, if you’re uncomfortable with being bigger bodied and/or hirsute, here’s a book that clearly celebrates that state of being. I like to think it makes these men feel desirable, in a culture that has been known to make them the subject of ridicule.

In the past, queer cartoonists relied on LGBTQ newspapers and bookstores to get their cartoons out there. The internet mostly killed that, but alternative comics fests seem to be thriving. What’s your take on the future of alternative comics shows?

There are so many shows going on right now, even with the demise or rebranding of some longstanding conventions. We’re living in very robust times, where LGBTQ creators have a wide variety of platforms to engage with the public. SPX, CAKE, TCAF… even SDCC, have been so supportive of diverse voices. I’m looking forward to expanding my own presence at some of the newer events over the next year, including CXC, which I have heard was a blast this past October.

My only concern is that these shows keep the focus on those who create mostly original content. Everyone has their fan art, me included, but I think that type of work has more of a place on the internet.That’s where it came from and that’s where I think it should mostly exist. The future of the alternative comics show, and the LGBTQ creators who frequent them, is really dependent on how brightly the spotlight is shined on unique creative voices…not endless iterations of pre-existing corporate properties. By all means, make a fraction of that available if you’re worried about covering the cost of exhibition. But don’t forsake your own original work in the process.

I know you sometimes teach classes in comics. So how do you plot a comic? Do you draw thumbnails as you go, or write first, then draw?

It really varies, depending on the project. For long form comics, I have traditionally scripted the entire book out from start to finish, allowing for some improvisation along the way.  Then I move toward thumb-nailing the whole thing.  When that looks tight enough, I bump up to full 11″ x 17″ rough pages, which I light-box into inked final pages.  Now that I own a Cintiq screen, I scan those larger rough pages and digitally draw over them in Photoshop. These are the methods I suggest for most of my Comic MFA students at California College of the Arts.

But to be truthful, I’ve been drawing the new issue of Wuvable Oaf one page at a time from a script by my new writer Matt Wobensmith. Each progressive page has been a reaction to the last, which has been really fun and fresh for me. Ultimately, I don’t think you’ll be able to tell the difference in the end product. I’ve been doing this for a while and there’s a solid consistency to the way I work.

Finally, how many cats do you have? Any cat tips for other Oaf fans?

Just one…and she is more than enough! My tips: Give them what they want. Whether it’s cuddles or food or horseplay… just give it to them. Or they will claw up your shirt stock, chew up the corners of your drawings, knock over your beloved action figure collection, poke holes in your weigh bench seat. I could go on. Just submit to their total domination.

5 Questions with Jeanne Córdova Prize Winner Nancy Agabian
'The Lavender Locker Room' by Patricia Nell Warren
'On Being Different: What It Means to Be Homosexual' by Merle Miller