‘After Disasters’ by Viet Dinh

‘After Disasters’ by Viet Dinh 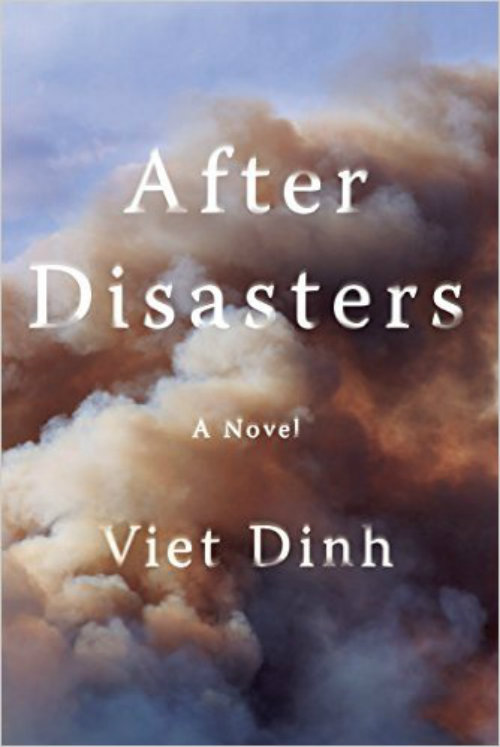 Disasters create a temporal free-fall in which an instant stretches into hours or days, the past is irrevocably stained with the present and the future is revealed as the fantasy it’s always been. Viet Dinh’s new novel, After Disasters, captures the fluidity of time in the wake of devastation, weaving together AIDS, earthquakes and 9/11 with a sure hand on the story’s complex tiller.Frankly, the book is outright beautiful, one of those rare combinations where you can’t stop reading it, so engaged are you in the characters’ lives, but equally, you force yourself to stop and sift through a sentence’s construction or reflect on how the author has so perfectly captured the ineffable.

At the book’s outset, we know we’re heading to India in the wake of a massive earthquake, following Ted, a gay man on his first disaster assignment with a U.S. aid organization. We know, too, there’s a haunted past–a dead lover mourned, perhaps some vague sense of guilt–and that in the disaster zone, a metaphorical place that expands far beyond any aftershocks, linear reality loses its boundaries.

Dinh sets the book’s liminal tone in the first few pages. Ted is on a red-eye flight from New York, along with two other compatriots, Lorraine and Piotr. She begins to change her watch to get synched up to India time.

“With the tip of her fingernail, she holds down a button on her watch. The hours flick by. Ted does the same, spinning the minute hand until he realizes, My god, the future’s already here.”

There are other storytellers, each with his own past elbowing noisily into the ravaged landscape. Dev is a physician who heads an HIV clinic in India. He studied in America, but returned to the subcontinent to set up a practice and, ultimately, to marry and have children, despite his sexual desires for men. Piotr is an old hand at disaster work with a mind for numbers, maps and contingency plans, all of which were thrown into disarray during the Bosnian crisis when his interpreter, a woman, became more than just a local. Finally, Andy is a young man from the U.K., a newly minted fireman who is also on his first overseas disaster mission. He, too, is gay, filled with the kind of hope that only the young possess, but he’s also on the edge of unexpected havoc.

Lorraine, although not a narrative point of view, holds one of the keys to the novel:

Once, while walking through Gramercy Park, Lorraine told [Ted] that there were two types of aid workers. The first type, she said, were running toward something… “The other type of aid worker,” she continued, “goes into aid work because they’re running away from something.”

Across the intersections of their pasts and the forging of new relationships in the conflagration of disaster, each character is running from loss right into the jaws of another ruinous event. All attempts to escape suffering are futile, because suffering will always find us, reigniting the embers of a past we’d rather forget.

Maybe it’s India, itself, that leads to thoughts of Buddhist suffering and the nature of conditioned existence, but Dinh plays the landscape with a masterful hand. The author conjures the chaotic madness of India in a flashback to Ted’s first time in the country, over a decade prior to the book’s main event. Yet this isn’t some white westerner view of a country often looked at through British imperial spectacles (Dinh himself was born in Vietnam, growing up in Colorado). The author captures the culture’s storied ability to break and remake someone, especially if they’re paying attention.

Ted confronts illness, his own temporary parasitic infection as well as the social sickness born from poverty and bigotry, through a classic hero’s journey to Varanasi and the city’s famed cremation grounds stretched along the holy Ganges river. Looking at countless burning bodies, charred corpses flung into the waters, Ted confronts his own mortality. More than just the big death when, through accident, violence or disease, our bodies stop their scrabbling for life, he embraces the demise of a personality, the cobbled amalgamation of past wounds and future aspirations.

I kept reading the book with a gossip’s voracity, because I instantly fell in love with each of these characters in different ways, but it’s what Dinh says through them – about life, about the urge to keep living, and yes, about shattering heartbreak – that will stay with me through whatever disasters lie ahead.