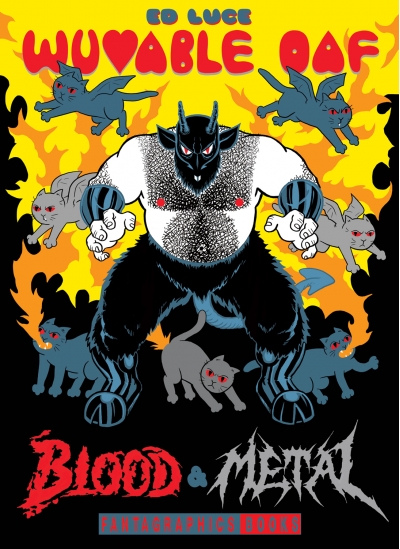 What do sweet, polite gay boys who follow their mother’s rules and love kittens have to do with surly teens that stay up late, listen to metal music and watch B-grade horror films into the wee hours of the night? Ed Luce, Wuvable Oaf’s creator, explains they are two sides of the same coin, or rather, two sides to his same Gemini coin. That’s also his explanation as to why his character Wuvable Oaf, a big, hairy gay guy who loves kittens, morphs into his alter-ego Goteblüd, a huge, hairy wrestler who’s secret weapon is a rain of blood.

If Luce’s first book Wuvable Oaf was literally a “graphic novel” about his hirsute hero, this book is a collection of short stories. But short stories implies lots of words, whereas this collection is a visual smorgasbord, packed with one-page wrestling matches, posters, fake ads for Oaf hair care products, an ad for a poseable Wrasslin’ Superstar Goteblüd action figure, and…paper dolls?!? The paper dolls are the best, featuring, for example, a wrestling leotard that includes the accessory of a weaker opponent slung over the wearer’s shoulders. Or how about loungewear for an oaf, a worn t-shirt and sweatpants, covered with twenty clinging kitties?

Goteblüd’s wrestling matches fulfill all the dirty “what-ifs” you idly wished might happen, but never did in WWF matches. For example, when matched against El Gato Inferno, the nasty feline wins by spraying Goteblüd in the face with pee–just like a real male cat. When corporate headquarters cuts the cost on Goteblüd’s costume, it turns out the cheaper, but way more revealing lycra thongs show too much wiener for family viewing. After a brutal match where everyone loses but Goteblüd, the narrator speculates, “He must be in bed with the Ref…” the final frame shows Goteblüd bedding down with both refs as well as the score girl.

A reprint of a funnier longer comic “Kindness of Strangers” shares a strategy for self-protection from slam dancing–pick a large dude, and hide behind him. “You latch onto him. Like a meathead anchor, “ Oaf advises. Another longer piece, “Formative” gives snapshots of Wuvable Oaf’s biography. A crayon drawing from a ten year Oaf explains, “When I grow up [….] Burt Reynolds and I will be kitty farmers,” and includes crayon art of the two men surrounded by cats. At age fourteen, we see a larger Oaf, in his rock-poster-covered bedroom, declaring, “Oh my God. I’m gay…for Phil Collins!”

These comics are funny, silly and touching. But they also highlight Luce’s marvelous talent as a designer and colorist. His use of color and the whole packaging of his comics entice readers to delve in. The color pink never looked so good, and the hairy endpapers spattered with blood (from wrestling? Or from kitty scratches?) will make you want to read everything between these furry covers, to find out how they got so scratched up.

"All Losses Are the Same" But Every Rediscovery of a Lesbian Poet Gives Us New Life
New History Exhibits, Recent Research Findings, and the VIDA Count
13th Balloon by Mark Bibbins